Southegowdanahalli is the only location where water is available at shallower depths and in plenty throughout the year. Mr.Krishnamurthy is a successful entrepreneur running a commercial drinking water supply business since 2002. Krishnamurthy supplies 50,000-100,000 litres of water every day. He is majorly supplying water to two apartments like Brigade and other apartment.

Honey sucker operator Kiran: Honey sucker operator Mr. Kiran makes about 1 to 3 trips a day. Three is the maximum trips he makes which will be 12,000litres of fecal sludge in quantity. He says in recent years the number of rented houses are more in number and the pit toilet contains about 3000litres of fecal sludge. "If we dispose fecal sludge in open spaces TMC will fine us. If the capacity of FSTP is full, TMC asks us to dispose in the open fields more than 5kms away from the city. When the FSTP is full or far from the collection point and if farmers are not taking fecal sludge we dispose of FS in open farm fields, mostly when the crop is harvested so it also helps the future cultivation. I think the capacity of FSTP is very less."

Honey sucker operator Punith: Mr.Punith's honey sucker is having 6000 litres of capacity. He mostly takes grey water from the commercial plots which is allowed to be dumped in farm fields. According to Punith, "the collection tank has just 5000 litres capacity. It takes more time to empty my honey sucker in the FSTP. I have to wait for one to two hours just to unload. I have to be competitive in my business, I cannot afford to say no to calls I get from households and thus I have no other choice to find a dumping place elsewhere after TMC limits. FSTP is a good initiative but it is not executed properly. There is a strong need to have big sumps."

Honey sucker operator Ramesh: Mr.Ramesh is a 45year old honey sucker operator who mostly serves within Devanahalli town. According to Ramesh, "We cannot find an open space to empty the fecal sludge. People question us if we dump in open spaces. During the rainy season it becomes all the more difficult. Thus having a formal disposal site helps us. FSTP capacity is very less. Rajkumar asks honey suckers to wait or to come back after an hour if both the tanks are full. Least it should accommodate 8 trucks. If FSTP are created in other places like in Chikkaballapur it helps us. "

Devanahalli Fecal Sludge Treatment Plant is the first of its kind in the country. FSTP is functioning from the year 2015. FSTP is implemented by Consortium of DEWATS Dissemination (CDD) Society with the funding from Bill and Melinda Gates foundation. According to CDD's report "Insights from Fecal Sludge Management in Devanahalli", FSTP was implemented to facilitate scientific dumping of fecal sludge and to end open dumping of fecal sludge causing health and environmental hazards. FSTP converts fecal sludge into co-compost which is sold to farmers.

CDD was looking after FSTP for a duration of one year. From 2016 to till date TMC is managing the FSTP entirely with technical guidance from the CDD. The plant manager, civil engineer is from the outsourced private company who was appointed in 2019.

Finances of FSTP: The capital cost of FSTP is Rs.8,000,000. The land belonged to TMC and thus capital cost excludes the land cost. Major cost of maintenance of FSTP is on paying the manpower. FSTP has one manager, one plant operator and 3 workers collecting wet waste. Rs. 15,000 is the salary paid to four workers. This makes about Rs.180,000 per annum.

Operational capacity: According to CDD's report FSTP is designed to treat 6000litres of FS in a day and FSTP is currently operating at 1/3rd of its capacity. According to TMC in a day 3000litres of fecal sludge is collected in the FSTP (this could be a single trip or 2-3 trips having around 1000litres capacity). In 2020, Government owned honey sucker has just made 12 trips a year whereas private owned honey sucker made 333 trips.

Co-compost: Fecal sludge compost is mixed with Municipal wet waste in 1:3 ratio to create co-compost. Co-compost is suggested to balance the Nitrogen level where E-Coli and Fecal Coli growth (could grow when applied to soil) can be permanently stopped when mixed with wet waste. CDD experimented the efficiency of co-compost by applying it on to the plants grown in the FSTP premises. Only after the results were proved to be good co-compost was sold to the farmers. Co-compost is sold to farmers at Rs.7 per kilogram. Currently there are 10-12 farmers buying co-compost in smaller quantities and 5-6 farmers buying in tons. There are mixed opinions from farmers using co-compost, few find the co-compost is not giving good results and few say they are benefitted. There are farmers who are reluctant to buy co-compost because it is fecal sludge and famers who bought co-compost without being aware it is fecal sludge never returned to buy. Co-compost is generally used for rose and grapes which are best suited as the farmers suggest. Yearly 200-250 tons of co-compost is generated. When FSTP was just started, advertisements on co-compost and FSTP was made using print media and on auto rickshaws.

Monitoring of FSTP: TMC has been monitoring FSTP for almost two years. There are no challenges currently faced by TMC in maintaining the FSTP because of the efficient worker Mr. Rajkumar. Rajkumar has been working in FSTP since its inception. He brings every small or major issue into TMC's notice which reduces TMC’s burden. Environmental Engineer Miss. Nethravathi gives all the credit to Rajkumar for the success of FSTP by saying "if Rajkumar wasn't there we would have neglected FSTP in all the bundles of works we handle."TMC is now planning to train other worker to reduce the dependence on only one worker.

Records: A ledger is regularly maintained by Rajkumar which contains all the details of honey suckers. The details include, date, government or private, name of the driver, contact number, quantity of fecal sludge and its sludge and water ratio, type of pit toilet and dept, Valve one or two, time of flow to BioGas digester, weight of solid waste in kg etc.

Wastewater disposal: Commercial units have created big tanks to hold grey water in the areas where there are no storm water drains. Wastewater(grey water) from these tanks are emptied by honey suckers and allowed to discharge in farmers fields since it has nutrients beneficial for agricultural fields.

Penalty on honey suckers: TMC is putting fines on the honey suckers who are disposing fecal sludge in open spaces. Honey Sucker operator Mr.Ramesh was fined Rs.5000 for dumping in a farm field.

Biogas Digester: Biogas Digester has been very inefficient since day one. it was supposed to fulfill the cooking needs of Rajkumar. It would take two hours to cook rice using the limited biogas generated. Rajkumar approached CDD and asked them to provide an alternate fuel source. He has got a gas cylinder from CDD and cooking and now he says, he has put the air out option in the biogas digester always open which would generate no gas!

Wet waste: Wet waste is collected from 10 wards currently. FSTP does not aim to be a complete solution for wet waste and thus total wet waste generated is not fully utilized in FSTP. Currently there are 4 complete wet waste composts and one partial compost under TMC.

Currently treated wastewater is been pumped to Doddakere, Sihineerkere and Bettakote lakes to name a few. MID was pumping TWW in alternate weeks when it just started pumping. According to the water man of Devanahalli town, MID is aiming not to allow the lakes to go dry. MID monitors the water level in the lakes and if the water level is less than 50% it pumps TWW immediately.

Doddakere lake was slightly de-silted before pumping treated wastewater and the bund was strengthened by the TMC. Sihineerkere lake's waste weir must be repaired and bunds must be strengthened. TMC says yield of borewells near Sihineerkere lake have increased drastically. TMC is yet to check the borewells near Doddakere to find out if there is an increase in the yield.

TMC's open wells: here are two open wells within 100m from the lake belonging to Town Municipal Corporation. These two open wells went dry for two decades. The open in the shape of a lock is referred as heritage well. Heritage well is yet to be cleaned and desilted. The other well is cleaned up, desilted and stones are strengthened.

Pump test and water quality tests were conducted to this well. According to the pump test the aquifer yields about 70,000-80,000litres per day. Water quality test results indicated the water is fit for drinking with little chlorination. The current water level is at 12ft from the ground level. It is expected to increase as the water level in Sihineerkere lake increases. Water level in the heritage well is at 16ft from the ground level. Yes, the measurement might vary since the lake has solid waste accumulation.

Devanahalli is a small town of Bengaluru Rural District of Karnataka.  Devanahalli is located at a distance of 40kms from Bengaluru. The town is a Town Municipal Council having the population of 28,051 as per 2011 census (currently 35,000 according to TMC). The town is divided into 23 wards.

Devanahalli is popular for Kempegowda International Airport which geared the town growth. Migration to the closest Bengaluru in search of better employment opportunities is a common phenomenon. Yet Devanahalli is mainly agriculture driven. The town falls into semi-arid to arid climatic zone and also considered to be drought prone. Flowers, vegetables, spinach and grapes are the major crops grown. Long term horticulture crops are not popular in the town. The produce is sold at the nearest Bengaluru markets. Farmers complain of not getting wage laborers since daily earners are working in commercial units, Airport or moving towards Bengaluru city. 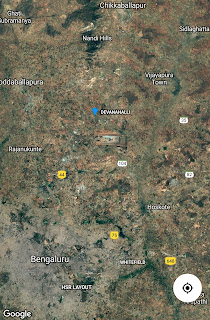 There is no perennial source of water supply in Devanahalli and groundwater is the only source of water supply to the town. Town Municipal Council (TMC) supplies 1,200,000liters of water a day at 55-65LPCD. TMC supplies both sweet and saline water to households. Sweet water is supplied once in 8 days and saline water once in 2 days. TMC is not supplying water for commercial units in the town. TMC is supplying water for government schools in the town and not private schools. TMC is not supplying water to ward number 22 and 2 since every household has a borewell.

RO Plants: RO plants are used to treat drinking water. There are 13 decentralized RO plants. One RO plant is provided for every 3 wards.

Water tariffs: Devanahalli TMC charges water tariffs to the households. Per month a nominal amount of Rs.120 is charged. Rs.4,800 is the deposit need to be made in order to take the water supply connection. 50% of the population is served for free without levying the water tariff.

Posted by Biome Trust at 9:04 PM No comments: