Rachenahalli Lake is on approximately 104 acres and is located in the north of Bangalore near the Embassy Manyata Business Park. The lake lies within the Yellamallappa Chetty Lake series within the Hebbal Valley. It is frequented by local residents who enjoy the provided walking path and park. During our visit on 7 November 2017, we observed that no STP exists in this lake; however, a well-demarcated area of wetland exists to the north of the lake. There are seven inlets - one into the wetland area, four from the wetland area into the main lake, and the other two directly into the main lake through naala overflow structures - and two outlets from the lake. The inlets carry a mixture of storm and sewage water. The volume of inflow through the inlets could not be determined. 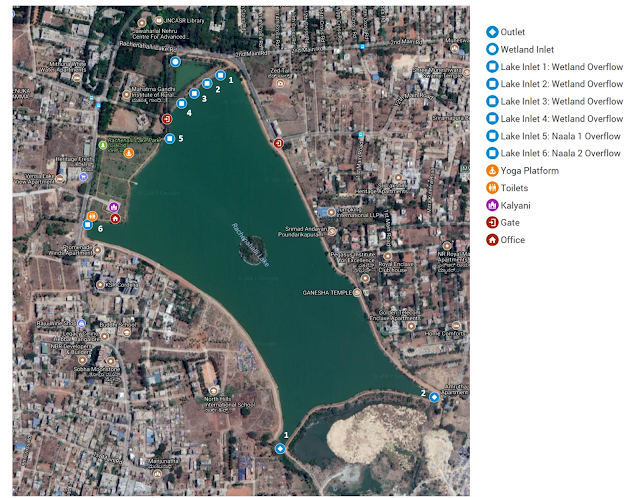 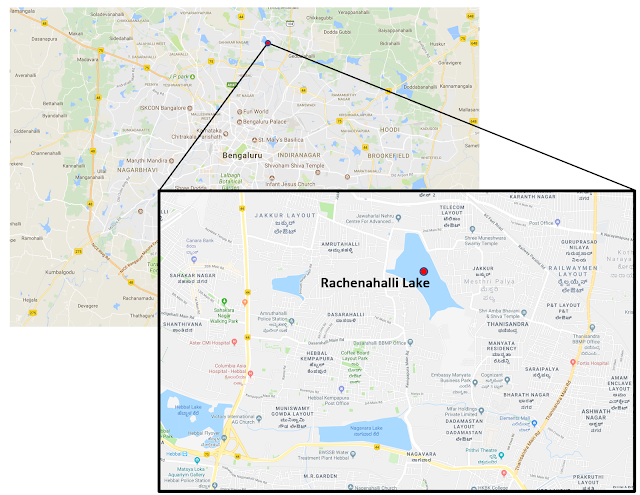 Overview and Observations
Rachenahalli Lake is located in Thanisandra, Bangalore. 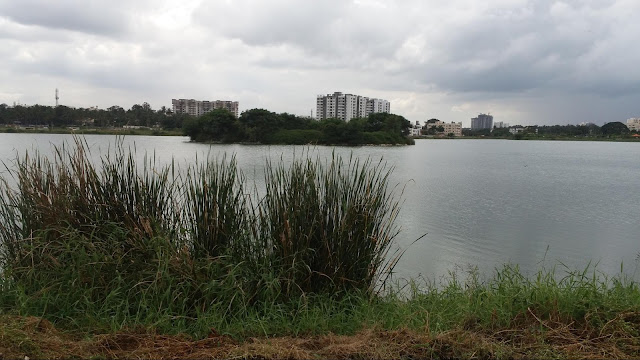 In 2016, Rachenahalli Lake was transferred from BDA to BBMP jurisdiction. Both prior to and after this change, the community group Jalamitra (founded in August 2015) has been active in the rejuvenation efforts.


In the mornings and evenings, local residents use the path around the western, northern, and eastern edges of the lake for walking, jogging, or other workouts while also visiting the park along the western side of the lake. The park was under construction at the time of our visit and includes the following amenities: a gazebo, toilets, an office, a yoga platform, and a kalyani, as well as several benches.

The Lake
One wetland inlet and six inlets where water would directly enter Rachenahalli Lake were identified and are summarized below.

The two outlets from the lake are both overflow systems under bridges in the south of the lake. At both outlets, particularly outlet 1, there was noticeable green hue to the water exiting the lake (see photos below). We also observed what appeared to be raw sewage mixing with the water just beyond lake outlet 1.


There was minimal buildup of algae on the water surface, though there was a noticeable green hue to the water near the outlets. In the center of the lake, the depth may reach about 10-11 feet.


Along the walking path, there is a park on the western side of the lake. Within the park are various amenities such as benches, toilets, a gazebo, a kalyani, and a yoga platform (see Map 1 for locations).

The STP
At present, no STP exists at Rachenahalli Lake.

The Wetland
There is a 2.5 acre natural wetland at Rachenahalli in the north corner of the lake which  accounts for about 2.4% of the total lake area. The wetland is separated from the main lake by a bund, through which is a bridge under which water will flow from the wetland into the lake.


The wetland also has a large number of wetland plants throughout. 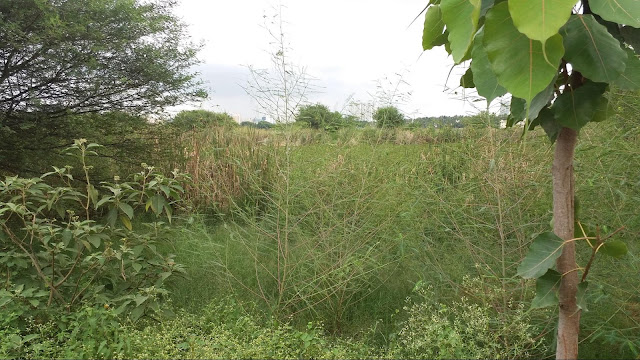 
Authored by Shreyas Sati and Alana Helin as part of the BIOME Trust Wetlands & Lakes Project
Summary
Ulsoor Lake is on 125 acres and is located very close to the central part of Bangalore by Kensington Road, Annaswamy Mudaliar Road, and Bhaskaran Road in Ulsoor, Bangalore. It is frequented by many local residents who enjoy the provided walking path, gym, kalyani, and other amenities. As of our visit on 6 October 2017, a 2 MLD STP is being constructed on the northeast side of the lake by Euro Tech Company1,2. At this point in time, not much information is known about the STP. There are no wetlands in the lake. The volume of inflow through the inlets could not be determined. 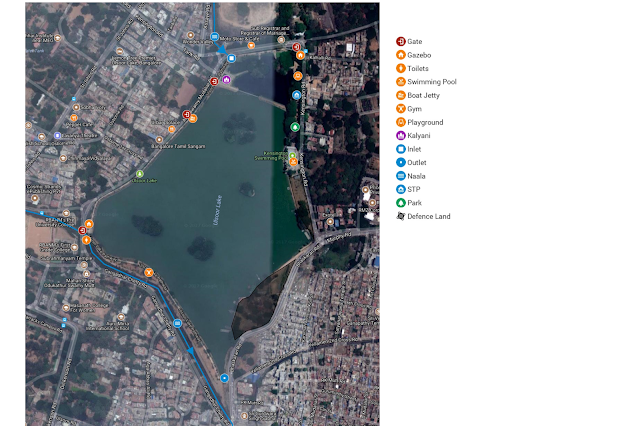 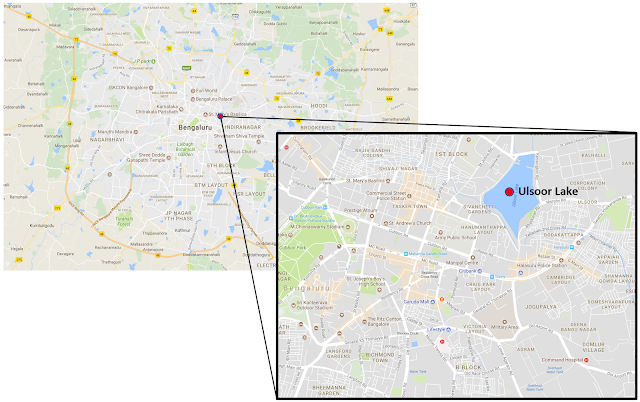 Overview and Observations
Ulsoor Lake is located in Ulsoor, Bangalore. 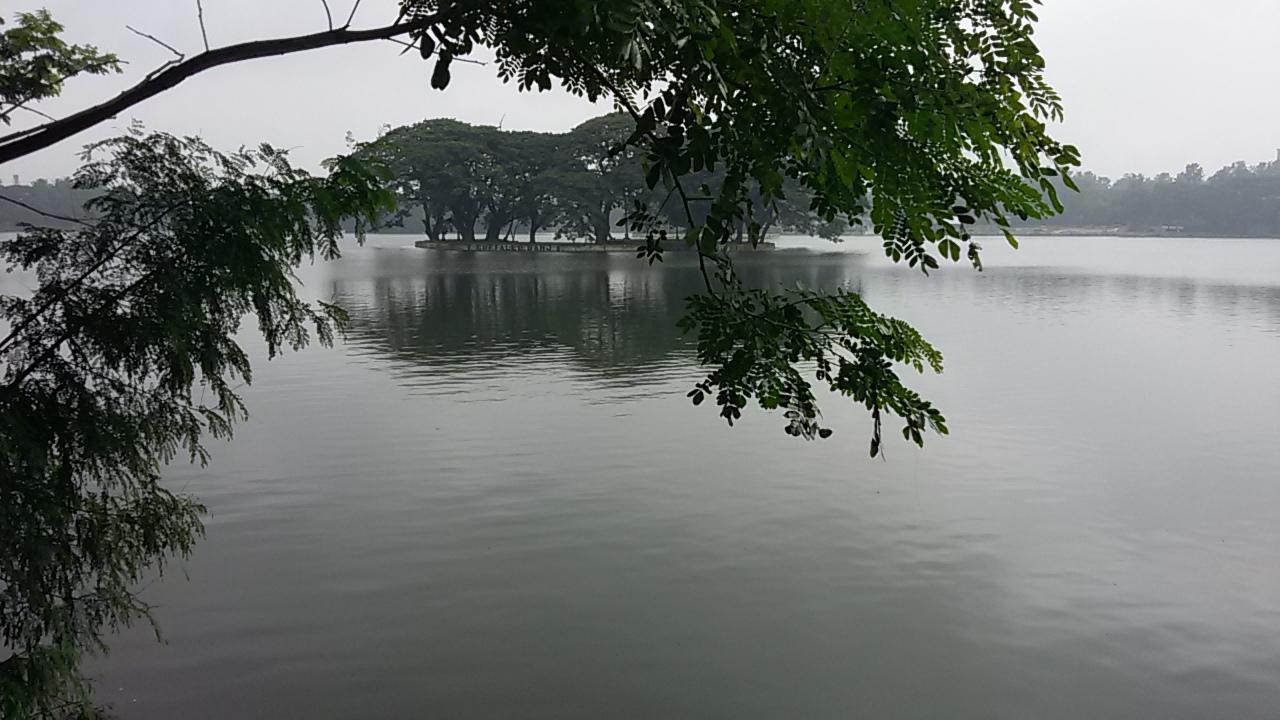 The Madras Sappers (MEG) have played an important role in rejuvenating the lake. Also, the Prestige Group have assumed some responsibilities in the rejuvenation, maintenance, and security of the lake. There is one primary inlet through which the sewage from the naala in the north overflows during a flood event into that part of the lake which is separated by a bund. The bund acts as a silt trap, which stops and removes plastic, silt, and other debris from the sewage before the sewage enters into the main part of the lake. The only outlet from the lake is located in the south.


There is a kalyani in the northern part of the lake. Based on its blackish colour and debris from previous idol immersions, we could assume that the water quality in the kalyani is poor. 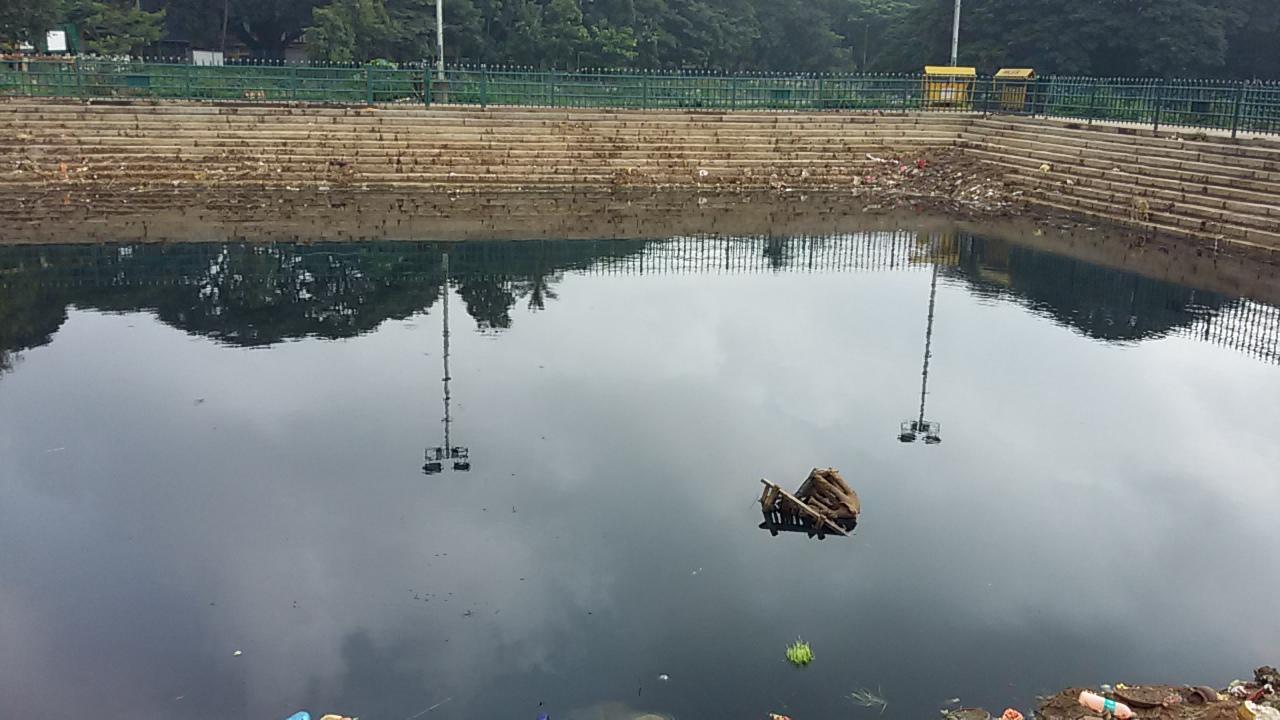 A huge naala flows towards the lake from the west and runs along the southwest boundary of the lake where it joins the outlet flow downstream to the south. 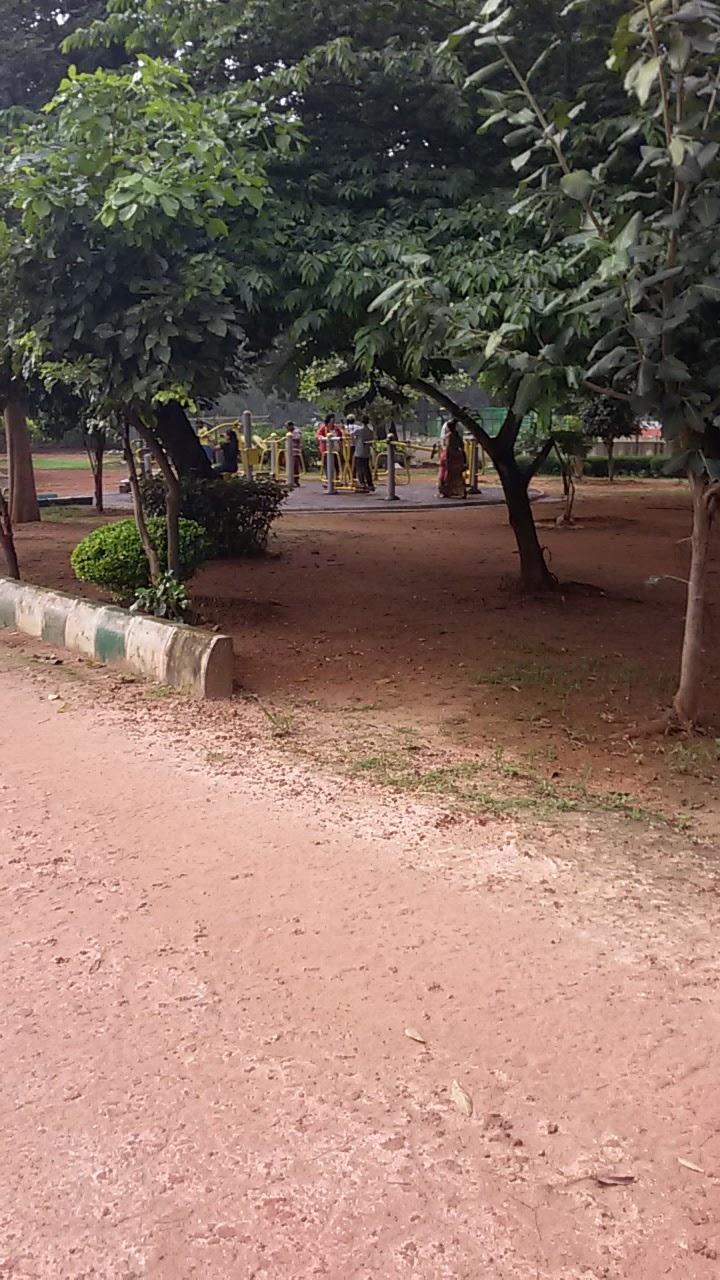 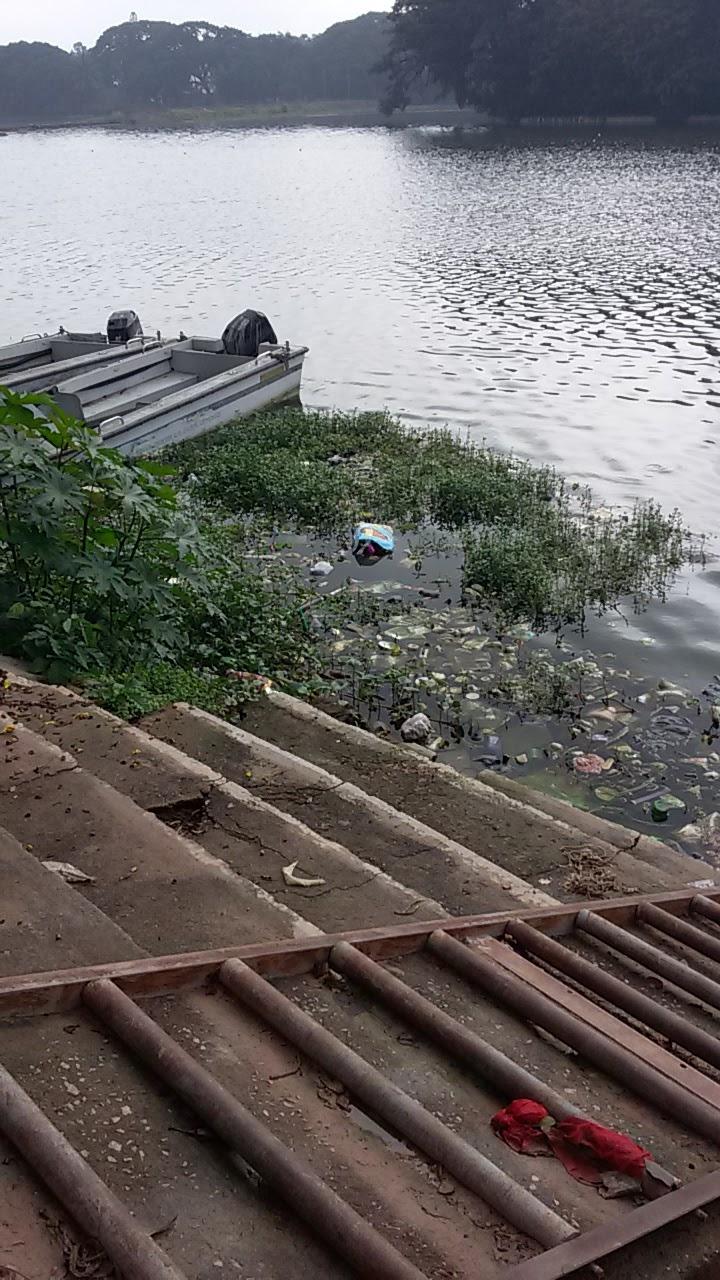 The beautiful Swami Vivekananda Park, a small playground, and a 50-meter swimming pool border the lake along the eastern edge. The rest of the land within the lake boundary on the eastern side belongs to the Defense Services. 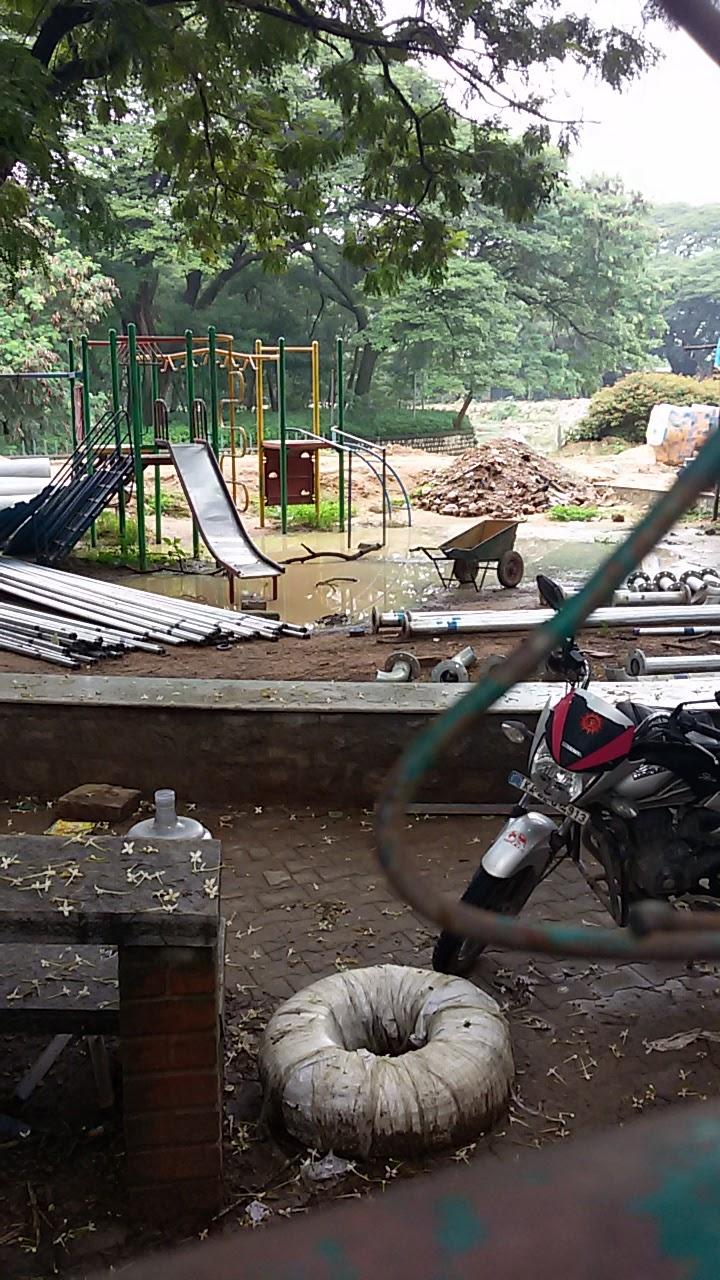 Fishing is done in Ulsoor Lake through specific contractors. From our secondary research, we know that in early 2016, due to heavy sewage inflow into the lake, people observed a large fish kill in the lake.


The Lake
Only one inlet was identified from which sewage would enter Ulsoor Lake. It is summarized below.
The STP is expected to completed in the first half of 2018 and may discharge treated water into the lake.


The outlet from the lake is an overflow system in the south of the lake. 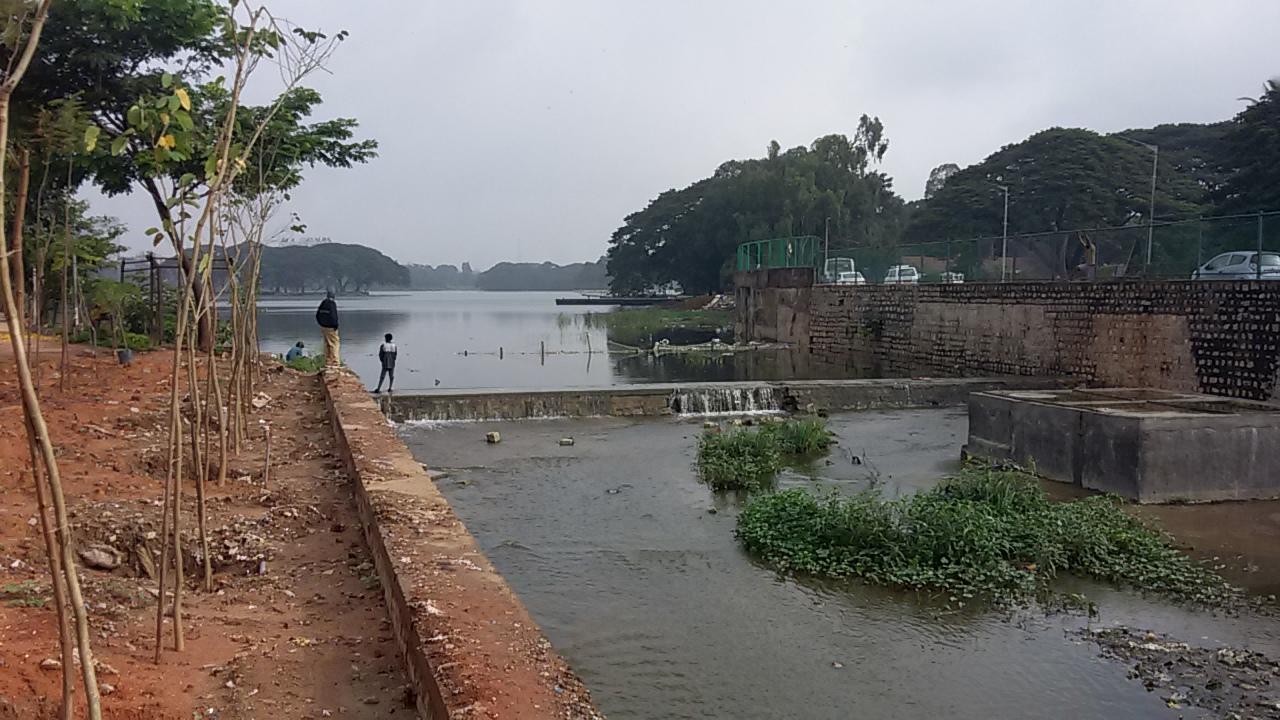 Overflow outlet from Ulsoor Lake (facing north towards the lake)


The STP
A 2 MLD STP is being constructed at Ulsoor in the north east part of the lake by Eurotech company. The STP is owned by BBMP2. No other information is available with respect to the STP. 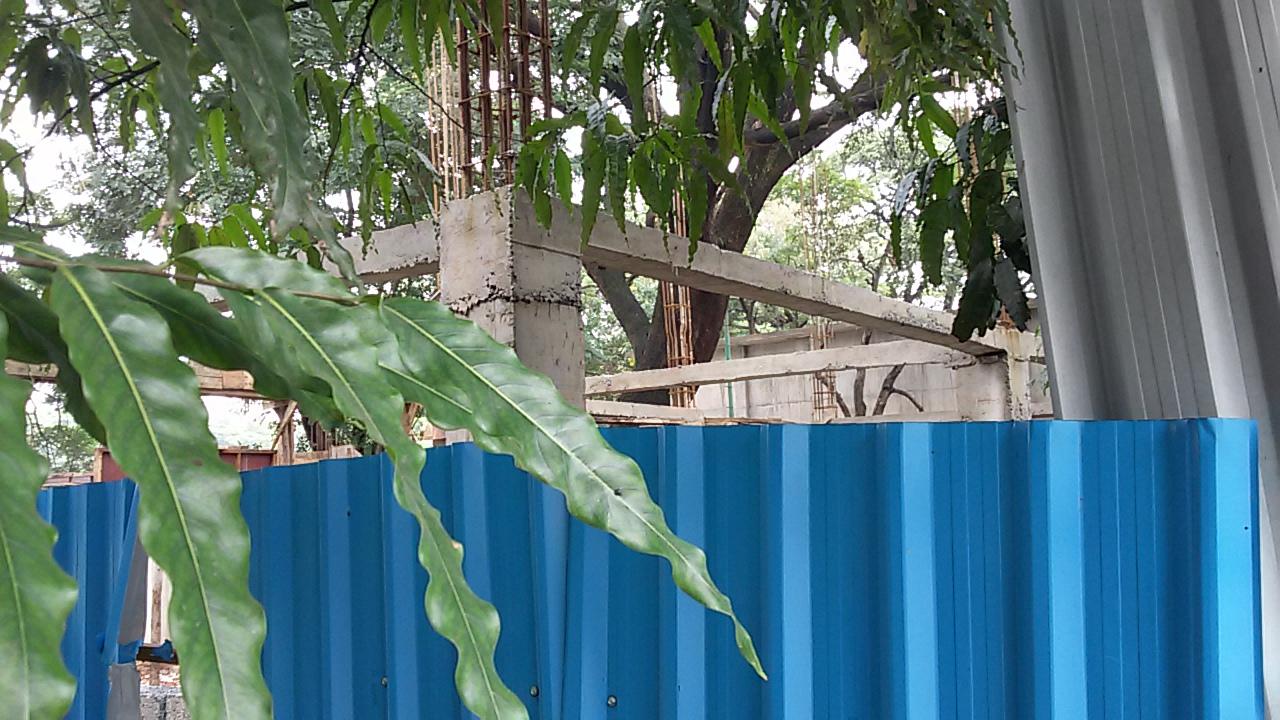 
The Wetlands
There are no wetlands at Ulsoor lake. However, the part of the lake that is separated from the main lake by a bund could be converted into a constructed wetland area. The available area for the constructed wetland (as calculated from Google Maps) is about 5 acres. 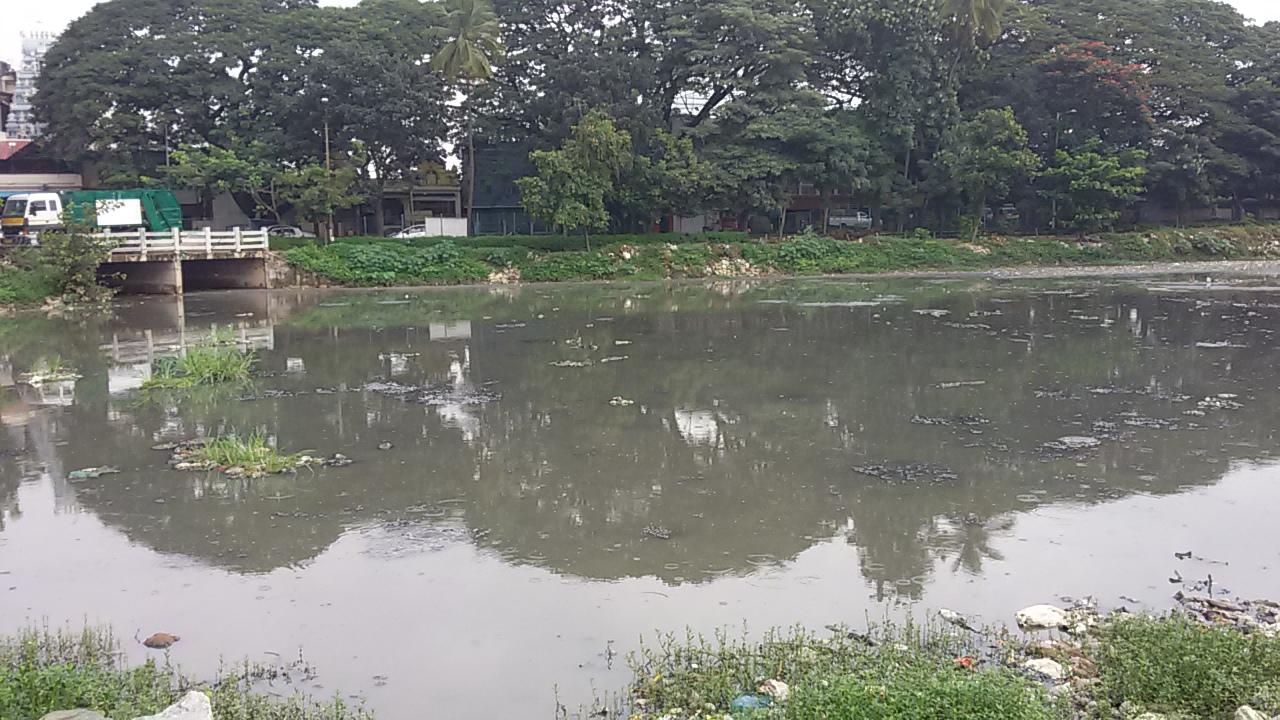 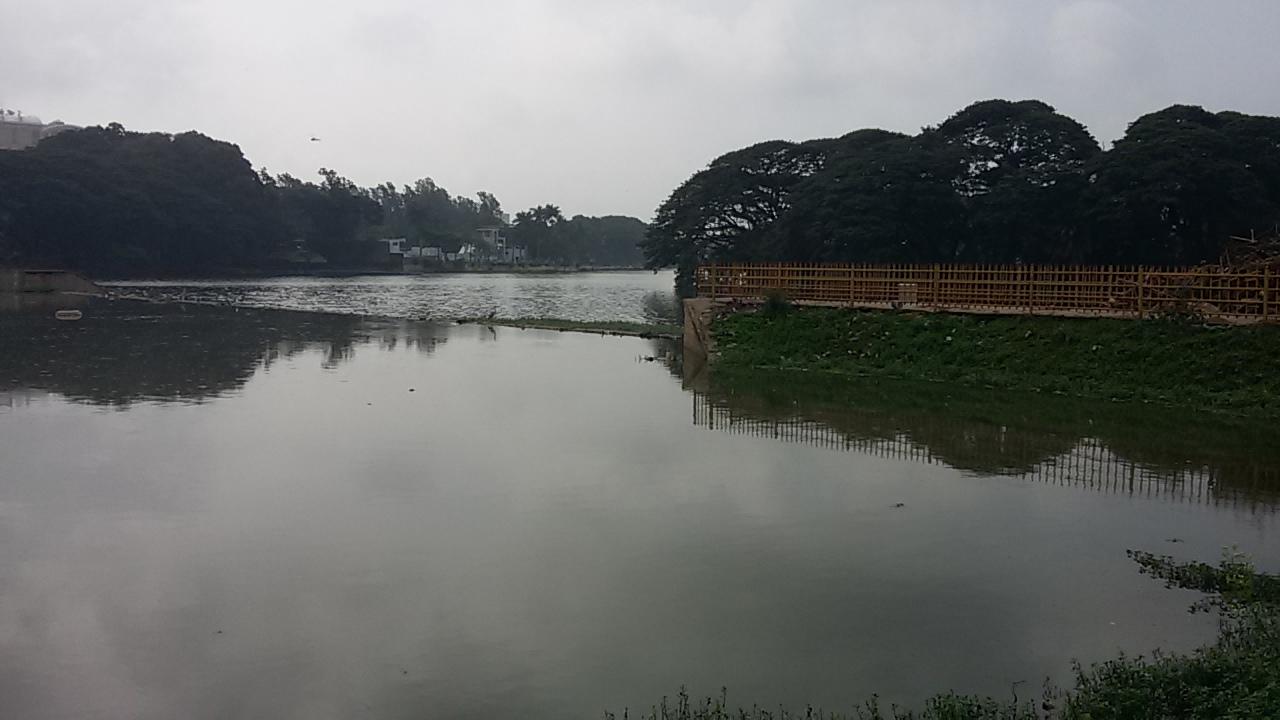 Part of the lake where sewage overflows that could be potential constructed wetlands.