The full article is here ...
http://www.home-review.com/2014/02/space-biome-environmantal-solutions/
Posted by Biome Trust at 8:13 AM No comments:

RWH Mela organized by BIOME and WIPRO on 22nd March 2014

A Short Summary of the Presentations and the Stalls

Stalls were setup by :
The event included the following speakers

Pictures of the Event

Word of Acknowledgement from some of the participants

"It was a pleasure to be part of the mela and there was lot to learn from different speakers. Thank you for inviting us to be part of it .

We appreciate the effort that you and other Biome members are putting up to create awareness regarding various aspects related to water.  "

"Thank you, for inviting me to present in this gathering, and for all the backend coordination you did to put together this talk series. Hats off to your enthusiasm, as I can imagine the effort it took to coordinate with so many different speakers, Wipro authorities and the invitees. I hope that one or two would be converted to doing RWH because of this seminar. That would be the best testament for the efforts you undertook."

Posted by Biome Trust at 1:33 AM No comments:

INVITATION EMAIL THAT CAN BE CIRCULATED

Wipro in association with Biome invite the community of Sarjapur Road/Bellandur Road area for a
Rain Water Harvesting Mela  on the 22nd of March 2014 (Saturday) at the
Auditorium, SJP-2, Wipro Corporate Campus, Sarjapur Road Bangalore
Timings : 11:00am to 1:30pm

For registering, please send an e-mail to eco.

POSTERS FOR PRINTING OR ATTACHING TO EMAILS (Uploaded on Slideshare)

Posters can be downloaded from here

Posted by Biome Trust at 9:56 PM No comments:

Biome went to Central Ground Water Board (CGWB) for secondary data collection regarding ground water levels around Sarjapur area of Bangalore.Several interesting facts came into light after the discussion about the city of Bangalore as well as our place of interest.
Dr.Sooryanarayana explained that very few City Municipal Corporations have BWSSB supply and how the water table in these newly added areas are quite deep (about 60-70 m is the depth to water level). In fact seven City Municipal Corporation's have been added to the old Bangalore City Corporation and most of them are heavily ground water dependent with little to no BWSSB supply. Whereas areas like Cubbon Park, an old Bangalore city corporation area, have got good ground water level. When discussing about the role of regulatory authorities and their purview, Dr. Sooryanarayana said that 22 taluks notified by CGWB come under 35 taluks notified by the State Ground Water Authority.

He also informed us that how water quality tests have been done in CGWB on samples from selected observation wells and it was found that nitrate content was quite high indicating sewage mixing. Also 550 observation wells of CGWB have gone dry and monitoring of these wells has been discontinued. The CGWB, he stated, monitors 350 piezometers with one in Sarjapura area where manual monitoring is undertaken. Digital data loggers are not functional hence manual monitoring is done now a days. Also, a heliborne survey was done in Tumkur area to understand groundwater in that area. 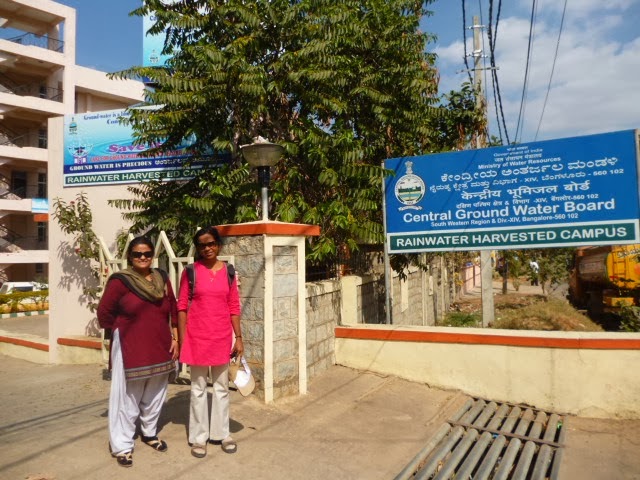 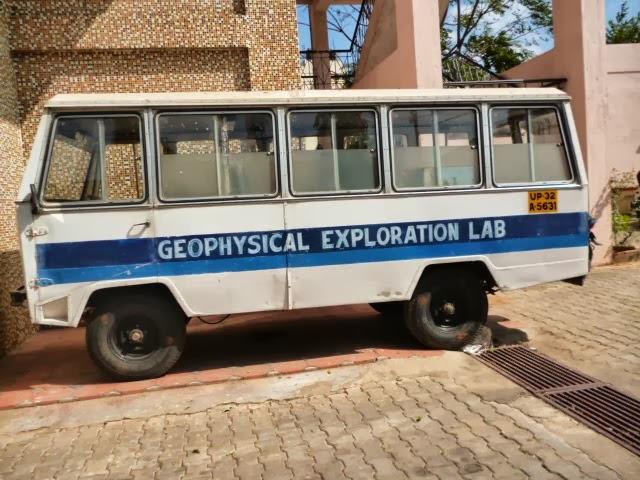 When Biome mentioned about its study on mapping Bangalore's aquifer with specific focus on the Sarjapura - Bellandur region, he suggested that we focus on the micro water sheds in the study region and also a good sample size of borewells and their extraction patterns. When Biome asked if open wells could be indicative of the aquifer itself, he remarked that wells in the vicinity of lake may not be representative of the aquifer as they can have water due to perched water condition. The aquifer itself can be either shallow (phreatic) or deep (piezometric) and if we were to determine the age of water then National Environmental Engineering Research Institute (NEERI) or Bhabha Atomic Research Centre (BARC) can do carbon dating and determine age. He also informed that Sarjapur area is over-exploited mainly due to the rapid development that it has seen in the last decade. When asked about any resources that would be helpful for our study, he pointed us to the CGWB's Ground Water Year Book which has details on 30 observation wells.

The solution of Bangalore’s water issue according to Dr.Sooryanarayana could be to treat water from lakes and then use it, rainwater harvesting and then managing demand.
These conversations will be really helpful for us for the future of our study to progress. We hope more cooperation from CGWB in the coming days.
Posted by Biome Trust at 10:19 AM No comments:

In the last couple of days BIOME has been to the KSPCB office twice. This was to clarify a couple of questions that cropped up every time we had any conversations around STP, zero discharge, ground water recharge etc. The main queries were around

The above screenshots carry some responses to the queries in the form of official documentations (in this case called OM - short for office memorandum). Here is the spirit behind the other responses that we got (responses not reproduced verbatim)

The Environmental Officer at the HQ of KSPCB (Central office) did express:
1. It is understandable that it is difficult for people to manage treated waste water without crystal clear rules on what to do.  Yes we know people find it difficult to understand what exactly they are supposed to do.  We also know that builders/real estate developers "exit" the projects and then it becomes peoples problems as the waste water gets generated only after occupancy.
2. There is a need for stakeholder institutions to come together to resolve some of the questions around Treatment, discharge and reuse of waste water.

It must be said that BIOME could meet with the KSPCB chairman as wells as other  officials that we
wanted to meet, fairly easily (of course after calling up and taking appointments) and each of them gave us a patient hearing and very thought through responses. It was also apparent that they were very aware of the current limitations in the system and the issues  that we were approaching them with and were already on their way to figuring out something that would work for all. They also saw a need for a body that would see the connectedness in all these issues (lakes, ground water, sewage treatment) and come up with appropriately implementable rules

We came back having decided to keep this conversation going
Posted by Biome Trust at 10:06 AM 2 comments:


There are 5 large, (of diameter greater than 20ft)  open  and perennially yielding wells in the KSRP (Karnataka State Reserve Police) campus in Madiwala. Since there is BWSSB water supply in the area, the well water is currently not used for domestic purposes. Lately the well water has not been tested either. But people on the campus are convinced that this water is of potable quality. Very many years ago this water was used for all domestic purposes.

Will these wells continue to yield water as construction activities around the lakes (that possibly feed these wells ) ensures that there is very little ground water recharge ?

For registering, please send an e-mail to eco

Many Thanks to Maitri for this hand drawn poster !!

Posted by Biome Trust at 9:06 AM No comments:

The lakes in and around the Sarjapura road area need to be understood in greater detail to study their role in the ground water situation in the Sarjapur - Bellandur region. A quick tour of nine lakes revealed the following information.


v  Singasandra lake: Located at 12º52’56.71” N latitude, 77º38’40.84” E longitude, and an altitude of 842 m. BBMP has de-silted the lake with an aim to convert it into a park. The lake area is about 10acres, of which the water body occupies about 8acres. By de-silting, the idea is to make the lake fit for collection of rain water; discharge of wastes into the lake is also being stopped. 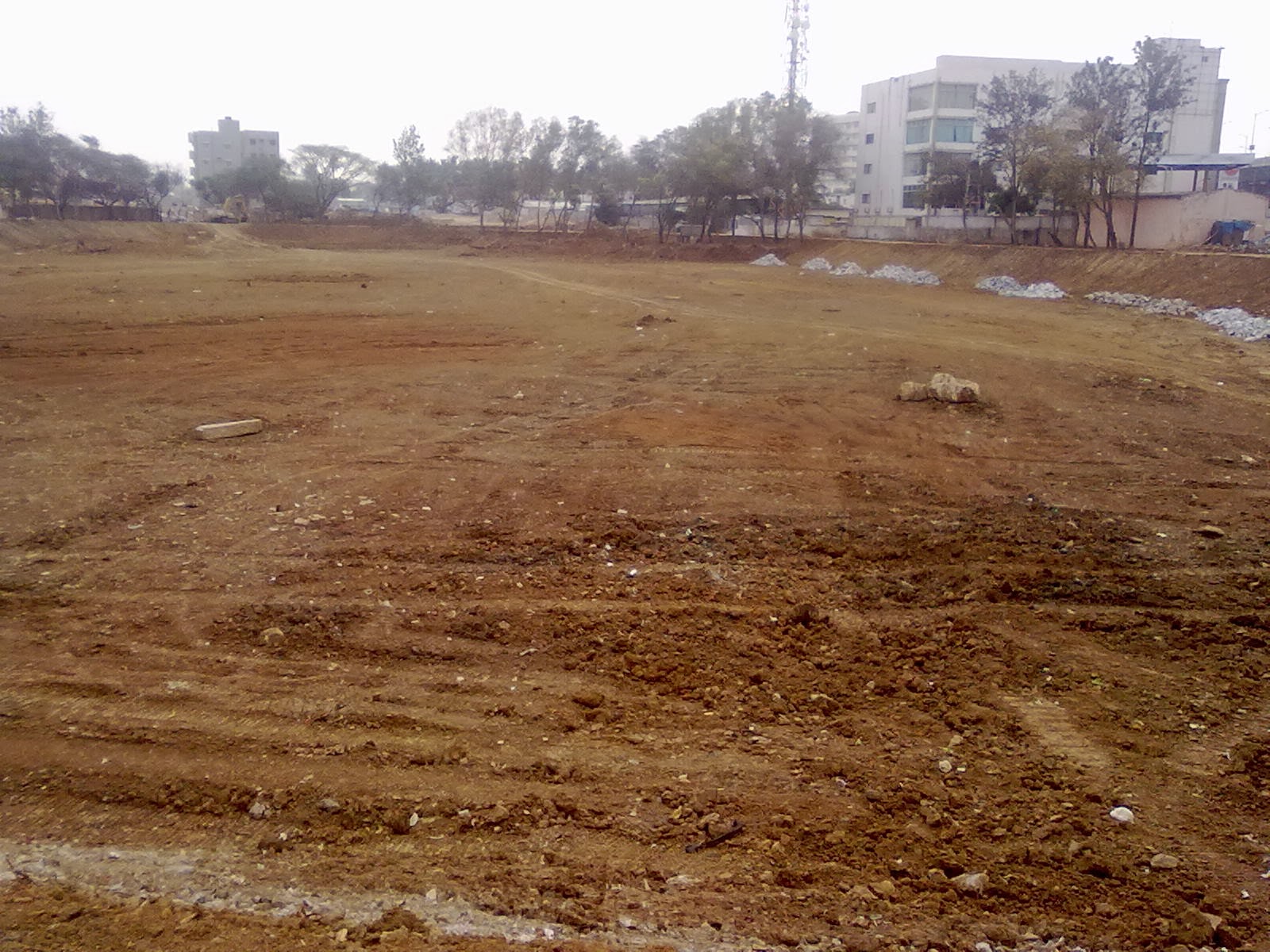 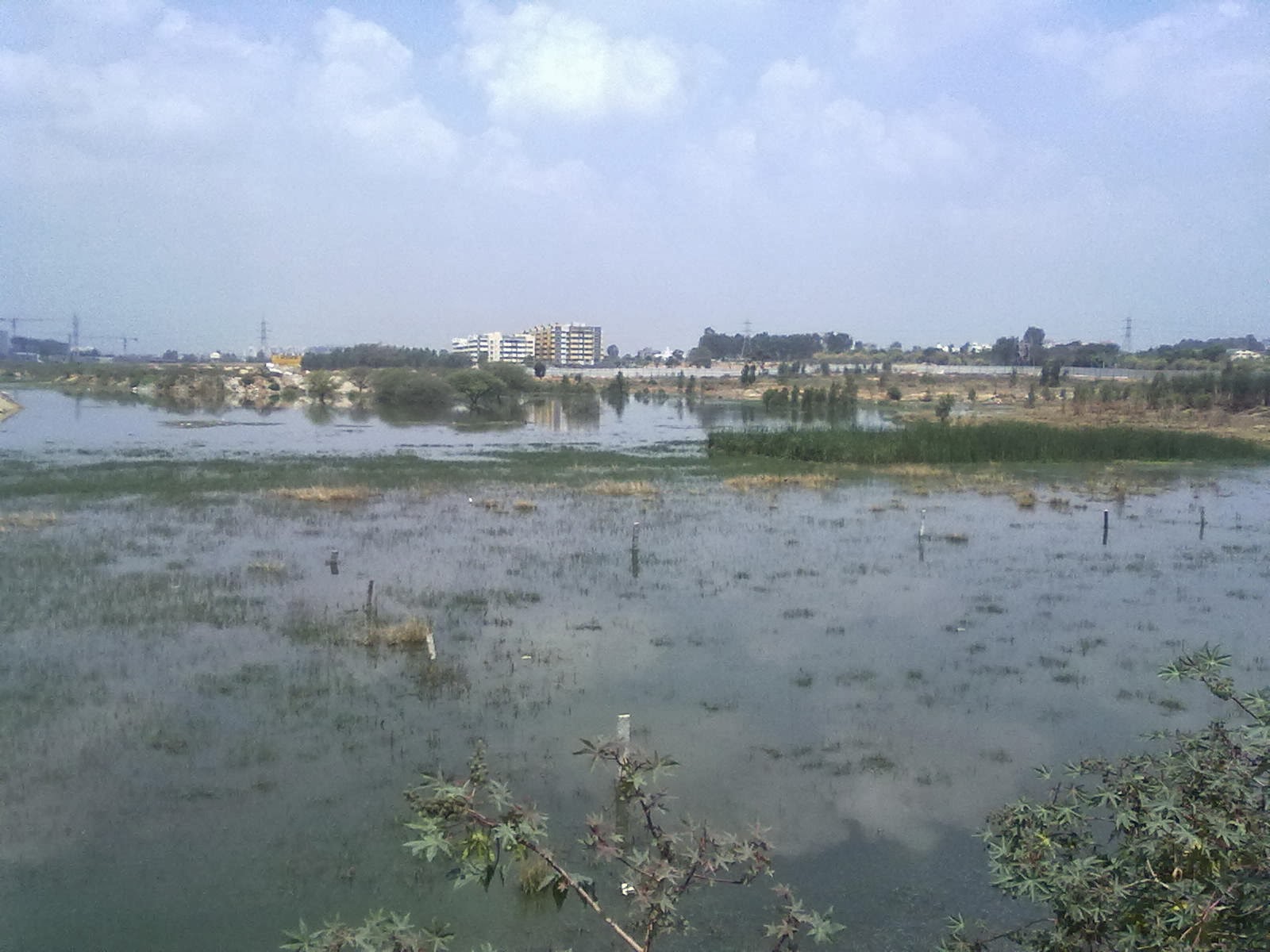 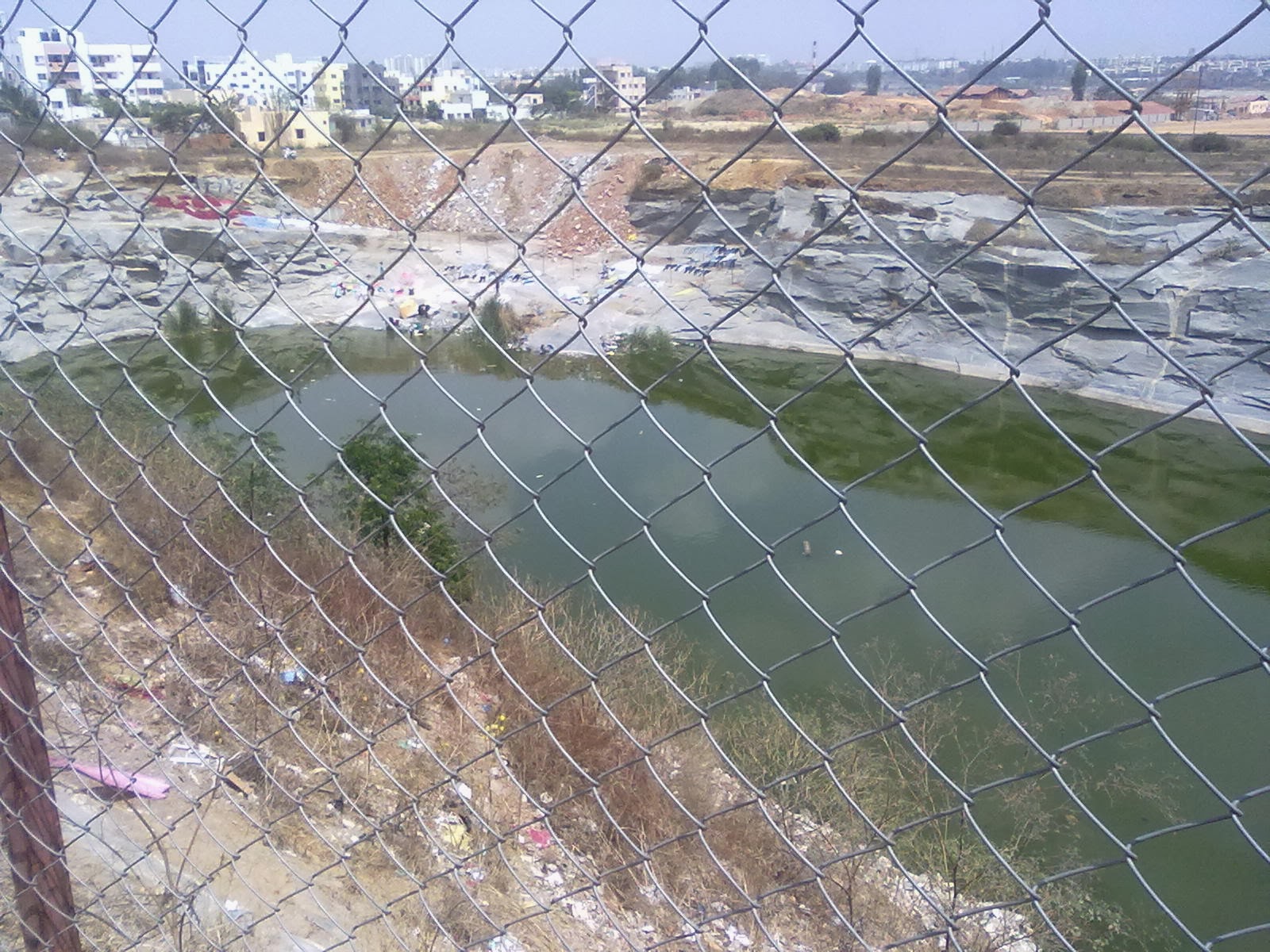 Illustration 2: Kudlu Lake and nearby ‘Bandi’ 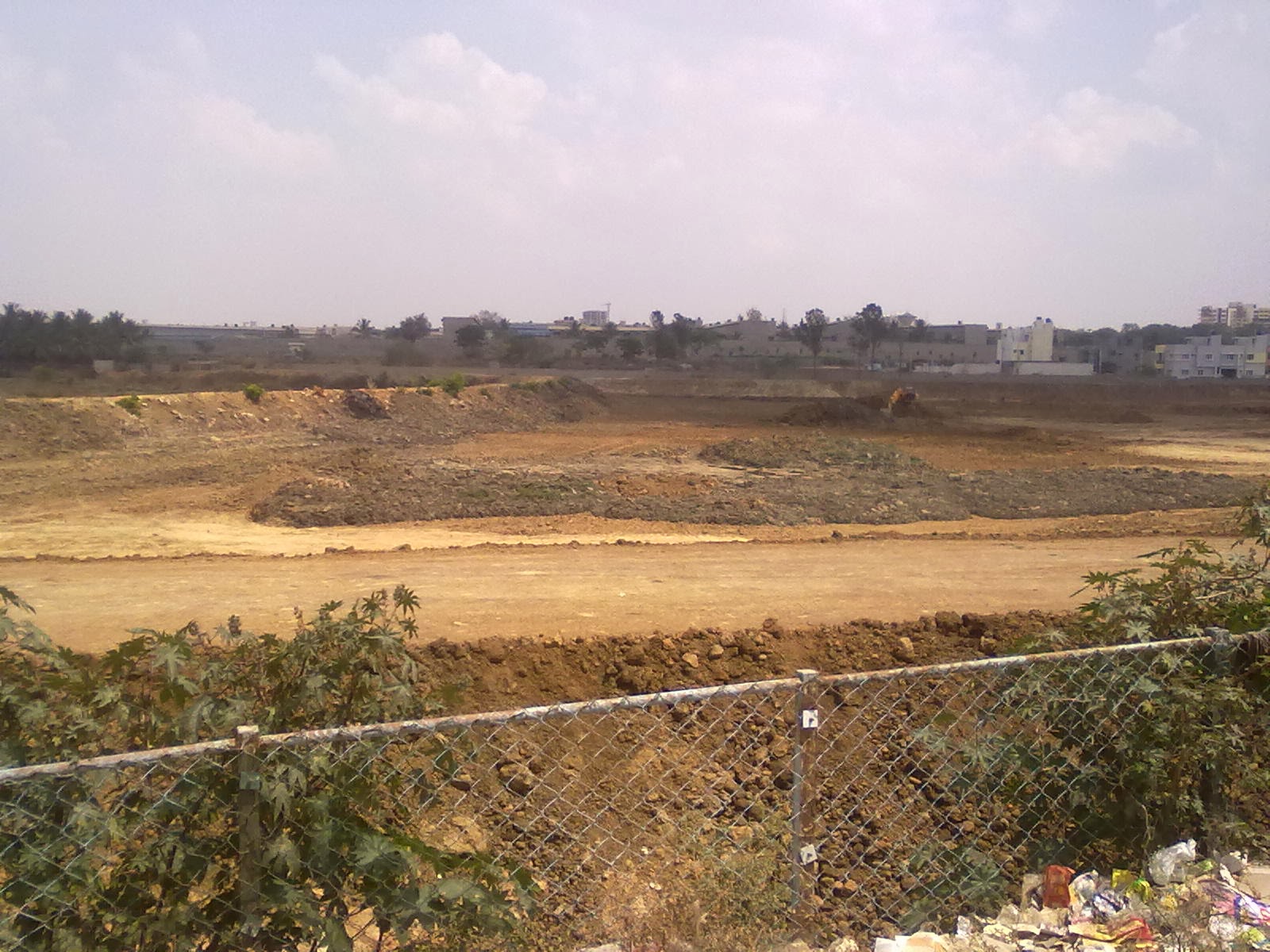 
v  Kodige Singasandra lake: Located at 12º52’46.30” N latitude, 77º38’32.32” E longitude and 846 m altitude. According to a local, till a couple of years ago, the lake was used as a source for drinking water and fishermen were earning their livelihood by catching the fishes from the lake. But now, the apartments and garment industries around the lake discharge untreated sanitary wastes and the chemical wastes into the lake. The person also added that people have complained about the sorry state of the lake to the BBMP but the authority has failed to take suitable action against the polluters. 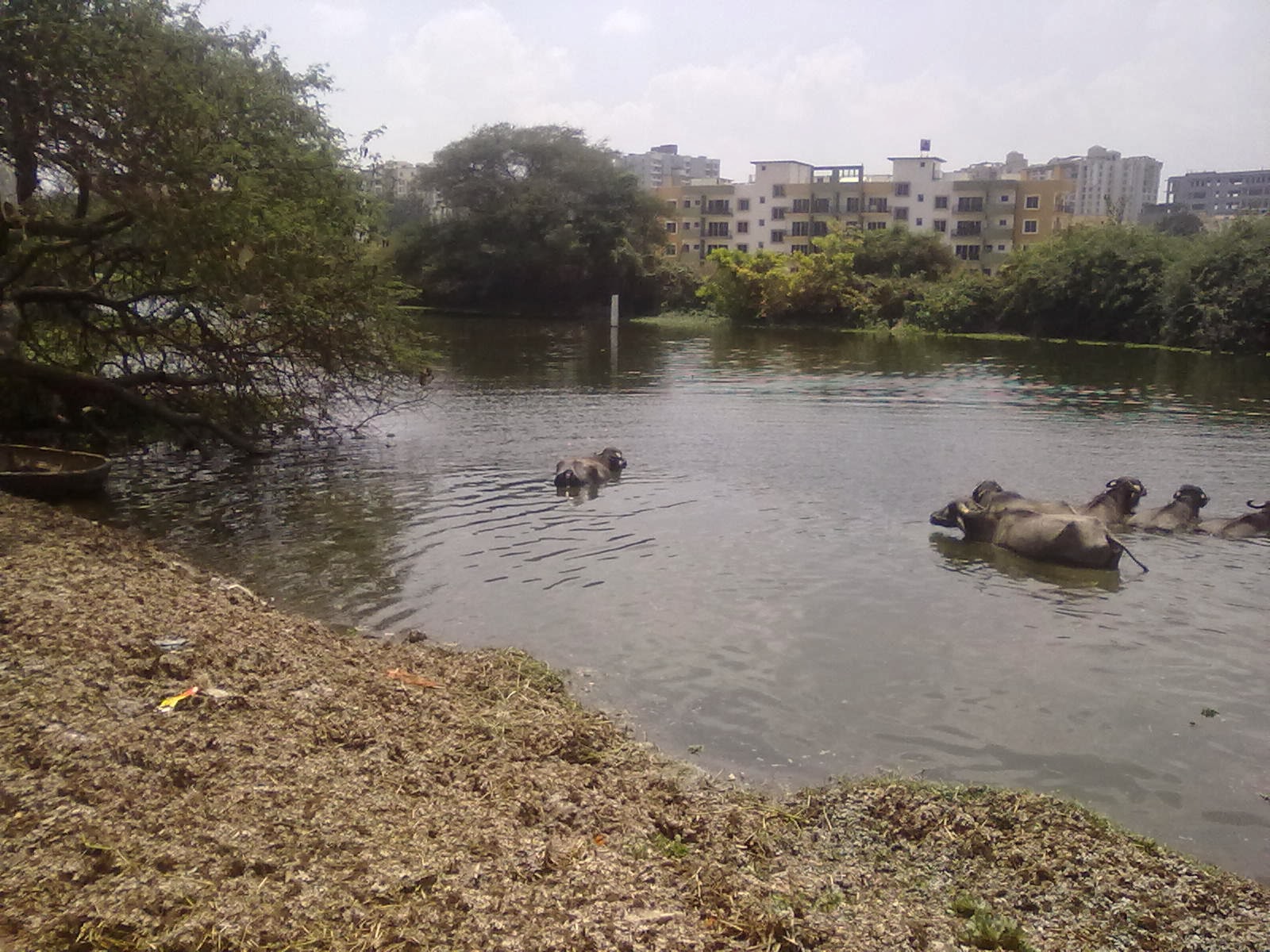 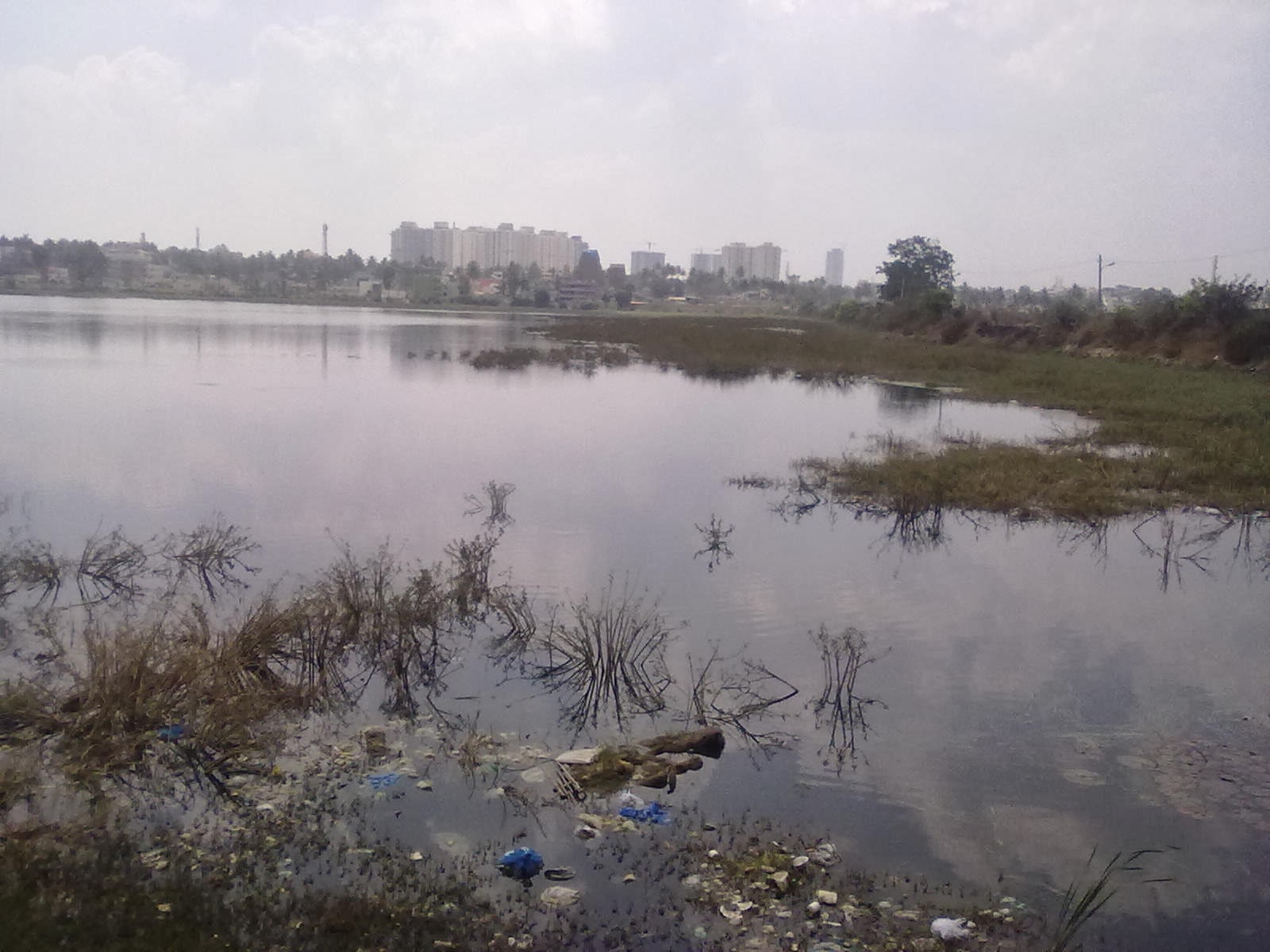 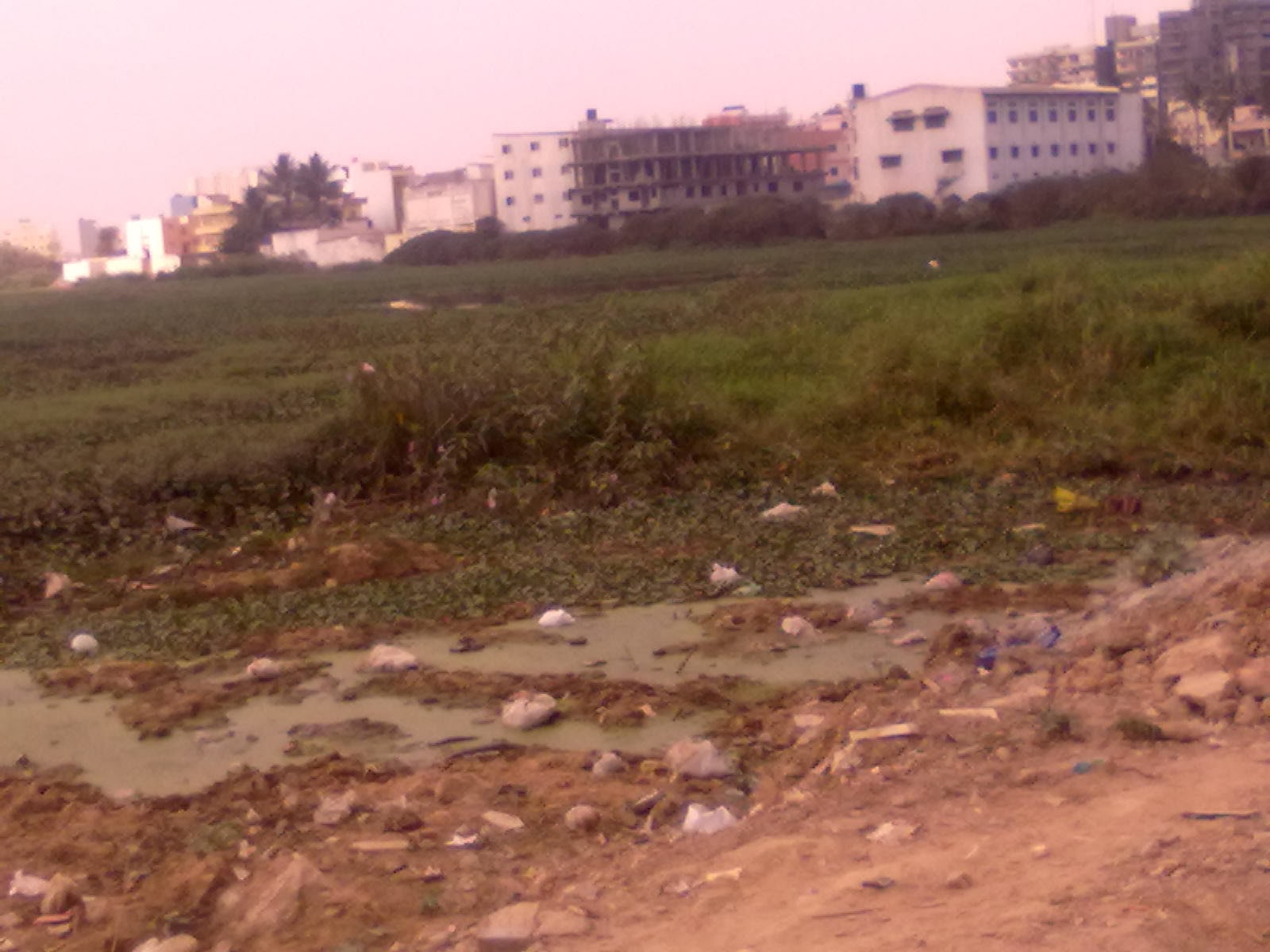 
v  Doddakanneli lake: Located at 12º54’46.17” N latitude, 77º41’44.77” E longitude and 809 m altitude. The lake was de-silted, the sanitary waste, previously discharged into this, is now diverted to a separate gutter. The lake will be soon surrounded by roads, and will only depend on rainfall for its water. 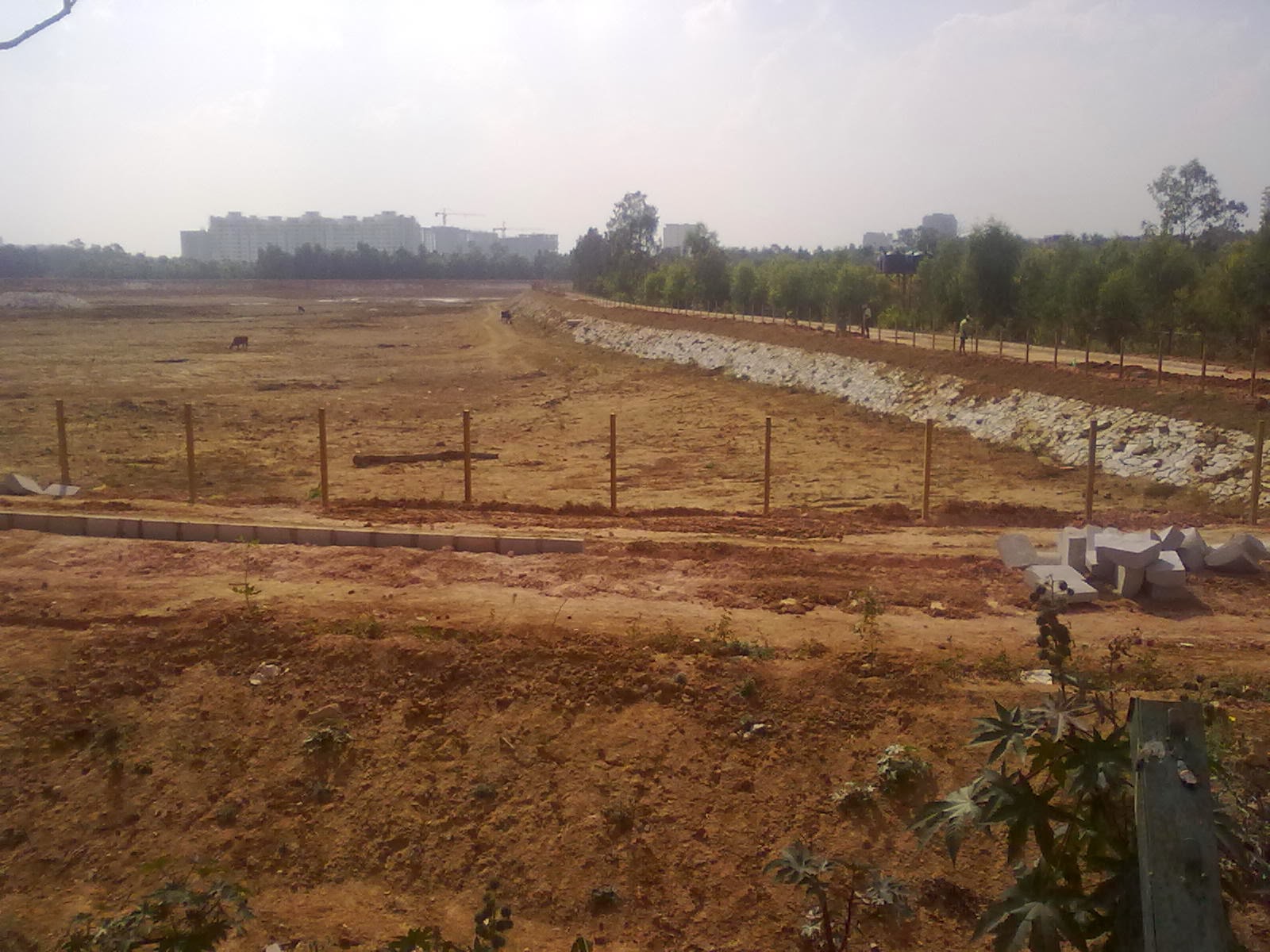 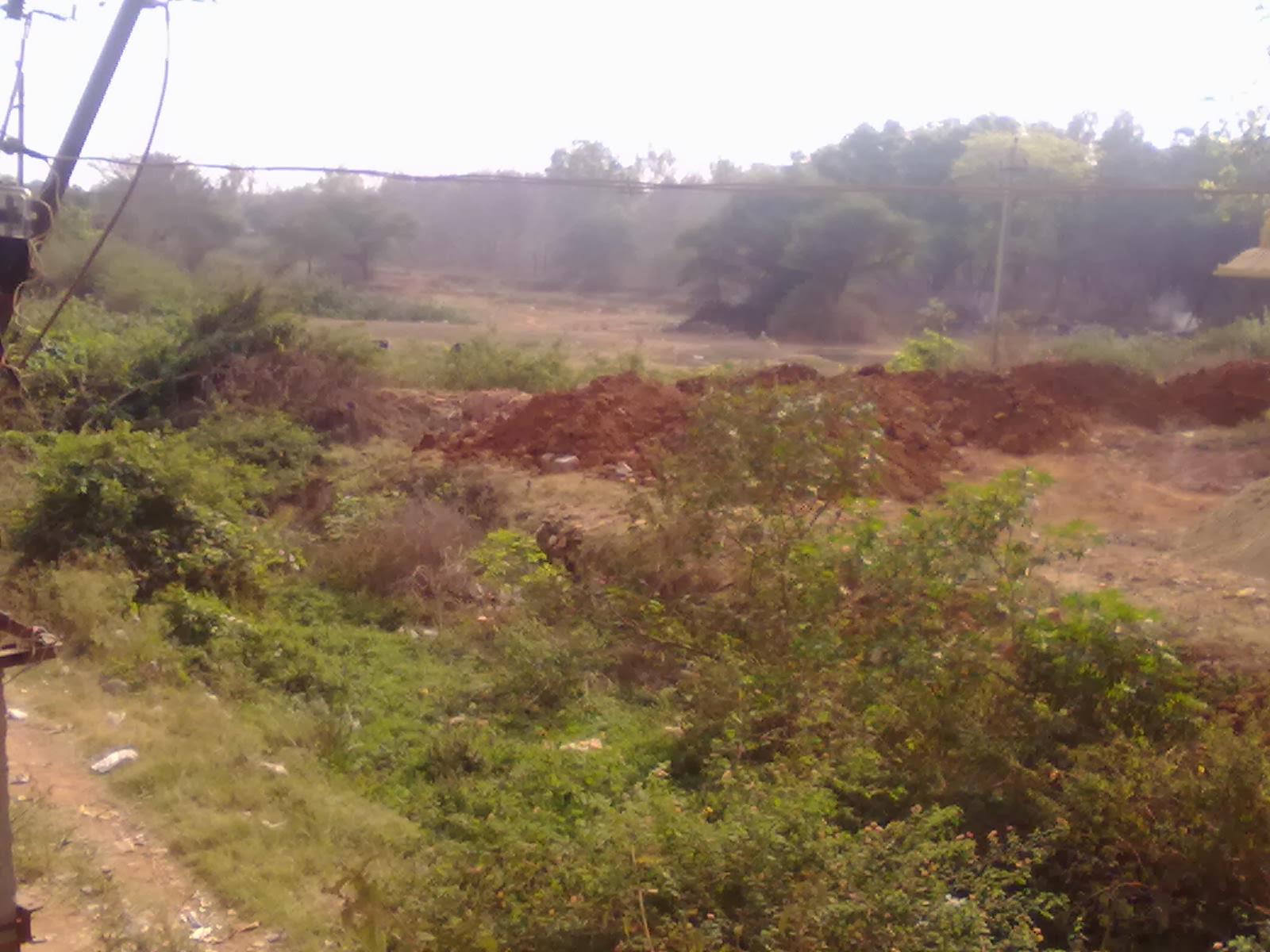 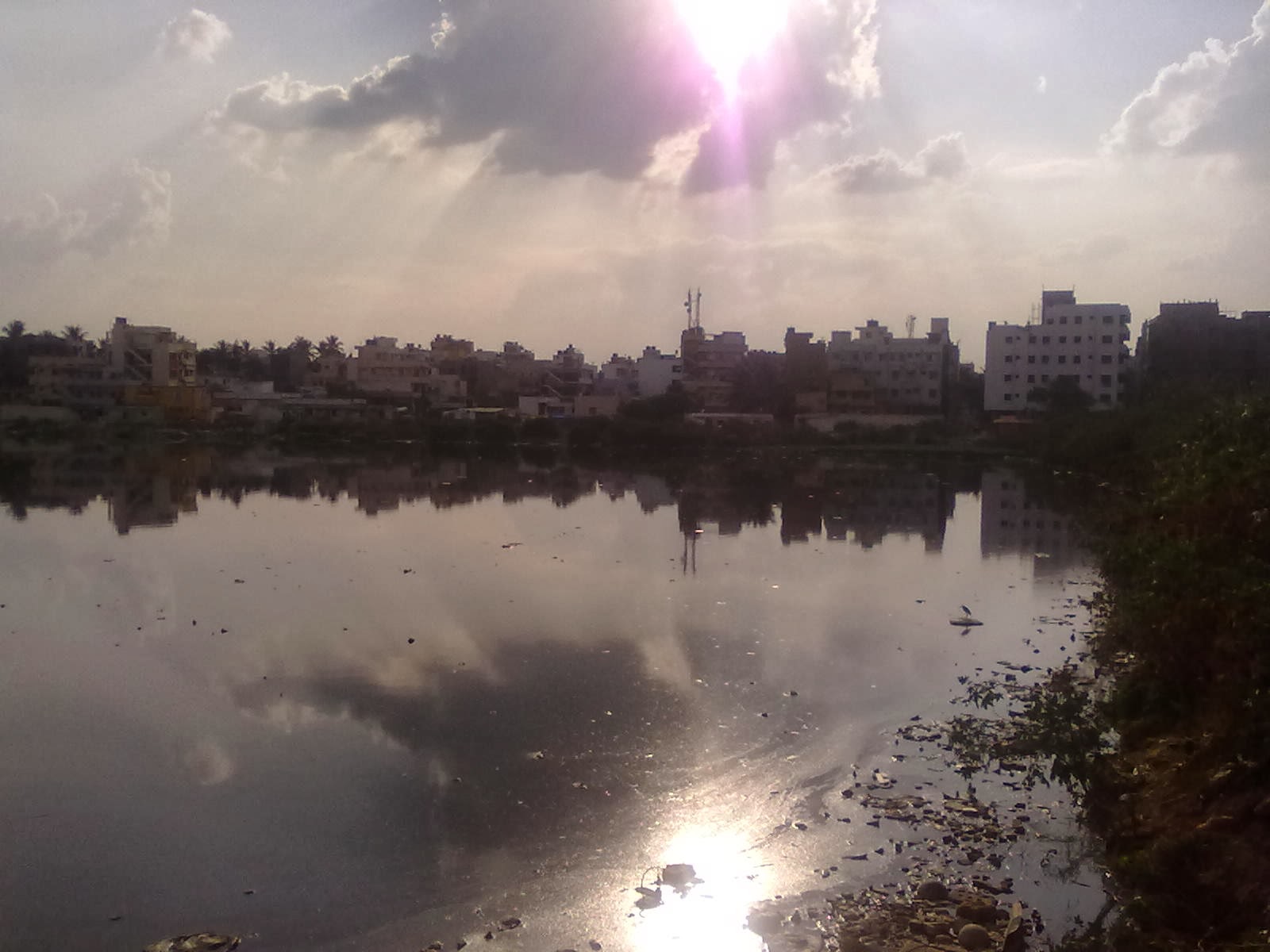 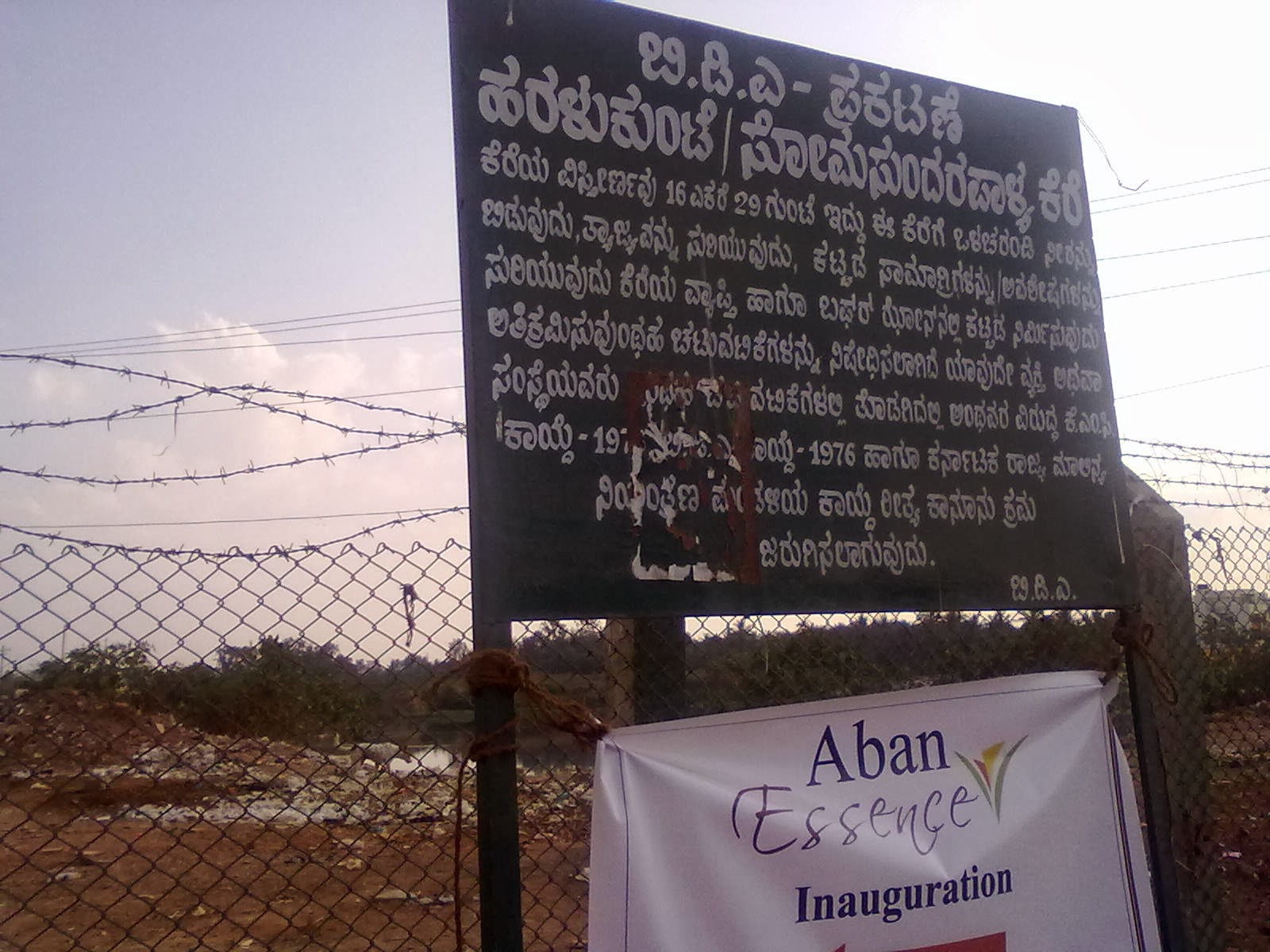 Beautiful old open well in Kodathi (Off Sarjapura Road) . Said to have last held water about 15 years ago. We were glad the well had not been filled up and closed. It could revive. Would be good if people 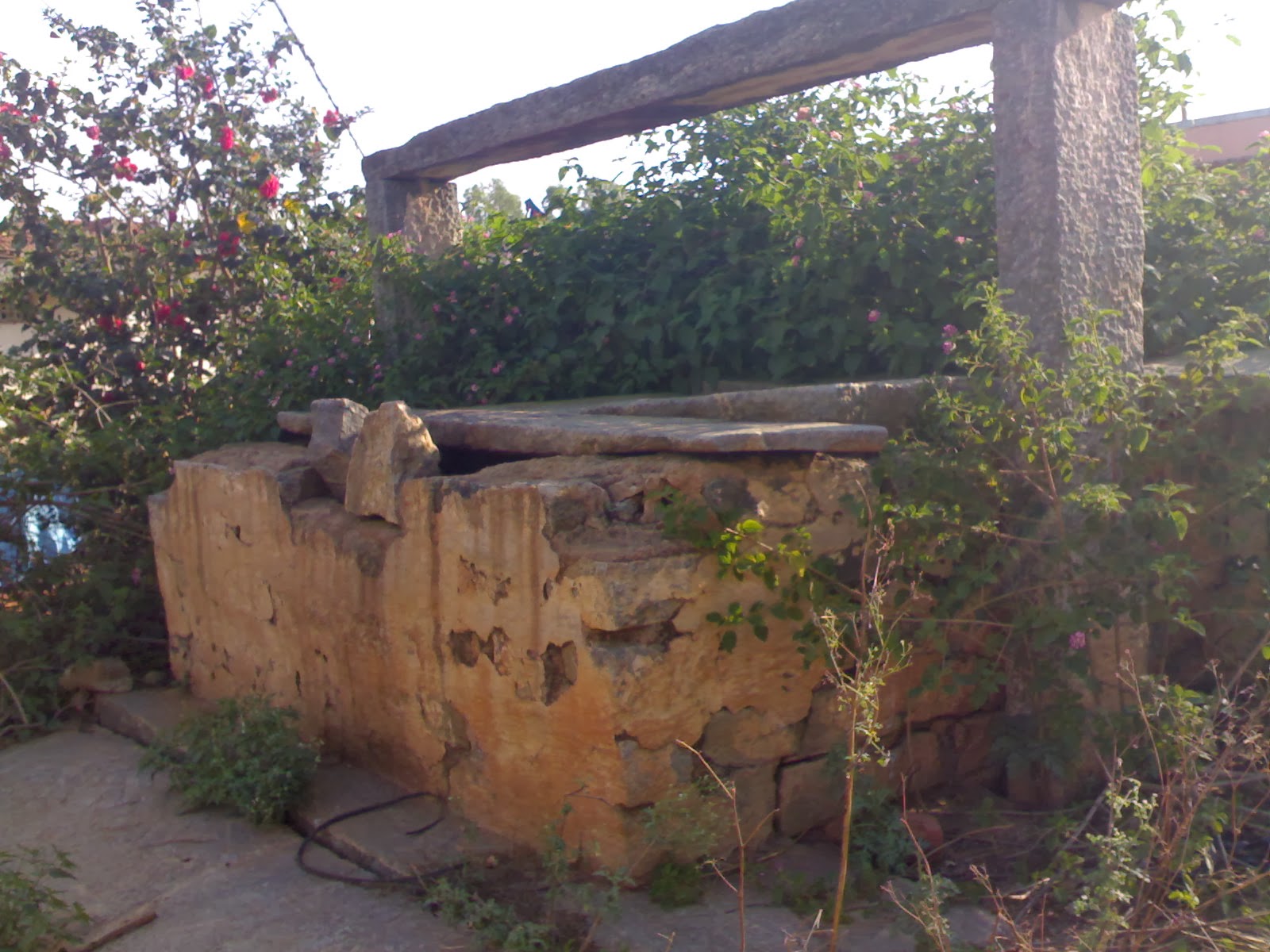 could get together and do ground water recharge in the area.

Groundwater does not have to be got from depths > 800ft (yes - even on Sarjapura Road). There seems to be ample evidence (in the form of old and abandoned open wells)  to support the fact that there was a shallow aquifer in this area at a depth of 20ft and below

An inspiring story on people going back to open wells in the Hindu: http://www.thehindu.com/todays-paper/tp-national/tp-karnataka/bidding-adieu-to-borewells-this-village-embraces-open-wells/article5752126.ece

Finally found what we had been looking for. An open well about 10ft in diameter, adjacent to Bellandur lake. The well had water at about 6ft below ground level. The water quality didnt look too good. But the water was certainly being pumped and used for irrigation. Could not find anybody who could tell us more about this well