The objective of this workshop is to train people on how to conduct biodiversity walks. It is a two day workshop, the first session was on the 16th of November, 2019 and the second session  on the 15th of December, 2019.


Often in urban areas, people are lost and detached from the biodiversity  around them. This is a collaborative effort by BIOME and ATREE to break this notion as part of CItizen-Science project funded by Oracle. 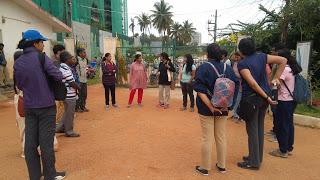 The day started by gathering at Jakkur Lake on 16th November 2019 at 7:00 am. An interested group of 16 gathered around for this journey. Dr. R. Ganesan, a Botany Researcher at ATREE conducted this walk and session. After a short introduction, Dr.R. Ganesan spotted the tree right next to us (a fig tree) and asked the question, 'how did this come into existence?' 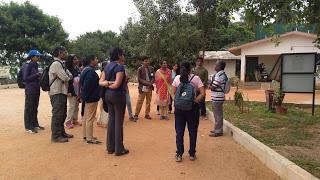 The group came up with a lot of answers, which not only included the trees and plants around but the whole system of nature (including insects, birds and animals). We learnt about different species of trees, explored their anatomy and understood their behaviour.

'One of the best ways to learn about biodiversity is just by observing', R Ganesan says. 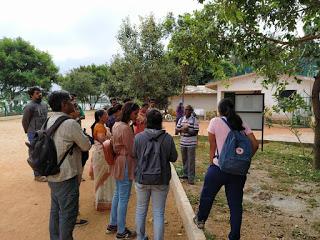 After two hours of walking around and exploring the biodiversity at Jakkur Lake, we headed back to ATREE which was followed by breakfast. We then gathered around in the auditorium to explore more about this journey. We learnt about various forms of trees and its surroundings. 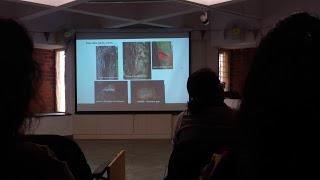 After this, we were divided into 4 groups to explore the biodiversity around ATREE. After half an hour, we gathered in the same place to exchange our learnings. We realised that even a small patch of land filled with nature has so much to learn and explore. It is very much necessary for many more to understand its value.

The next session is held next month. Meanwhile the task/challenge is to have a small biodiversity walk, record them and share it with others: the beauty of nature.

The second session started with a walk at Jakkur lake at 7.30am. The walk was on Spiders and insects.  Vena Kapoor, a spider expert from the Nature Conservation Foundation led this walk and session. Plan was to spot a spider or a web and observe its behaviour, pattern of the web, its habitat such as - on ground,  on the tree bark, under the leaves, in the leaf litter or between shrubs or on the wall and then name it.

Spiders belong to the class Arachnida, order Araneae. They are not insects.  One of the differences between spiders and insects is, Spiders have eight legs whereas insects have 6 legs. Spiders can be blind, or have 2,4,6 or 8 eyes. Over 50,000 species of spiders have been identified.

There are mainly two kinds of spiders, one which builds its web to catch its prey and the other which do not build webs but actively hunt to catch its prey. All spiders produce silk. They use it for different purposes to build web,, to protect the egg sacs, as retreat etc 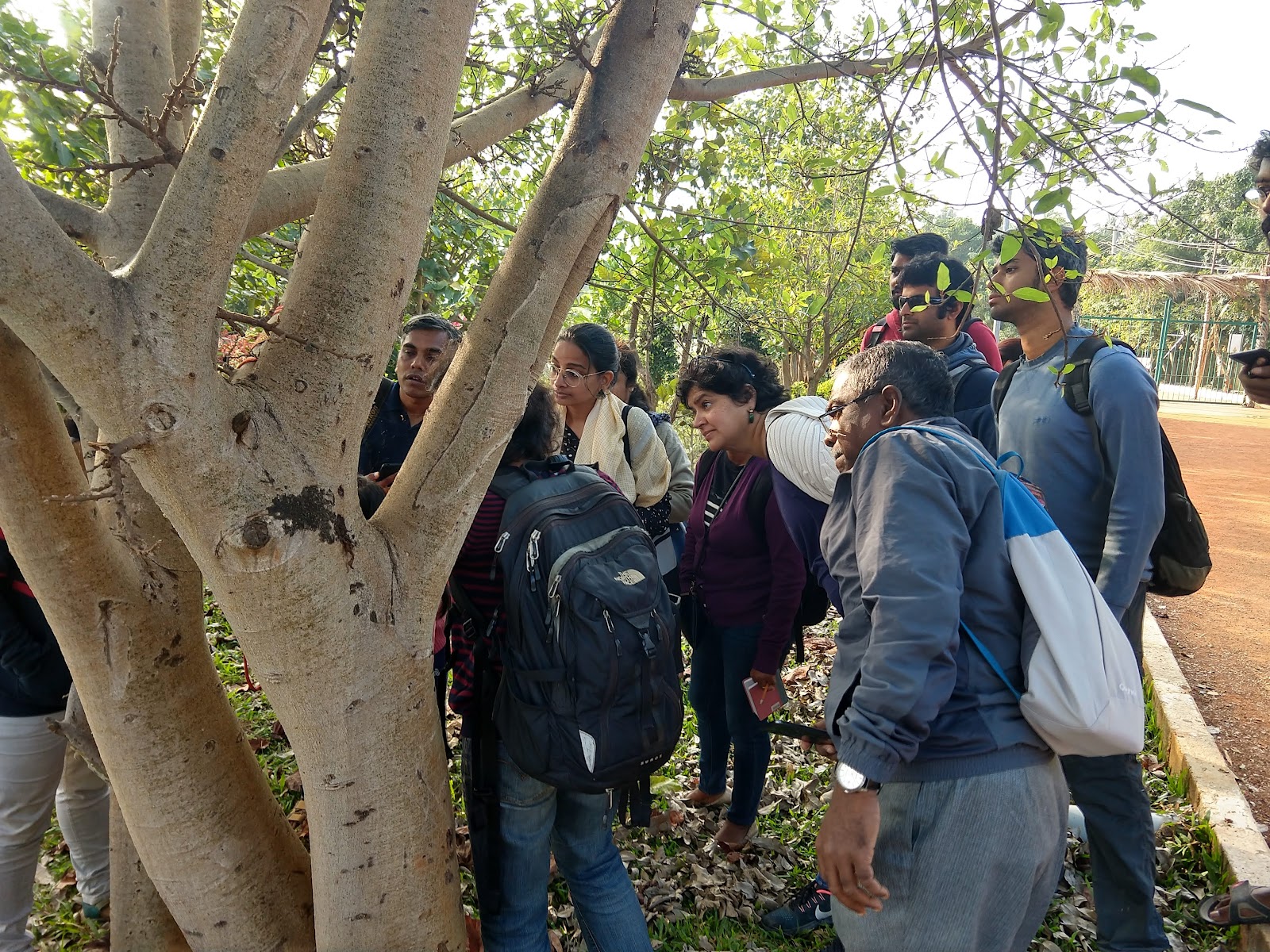 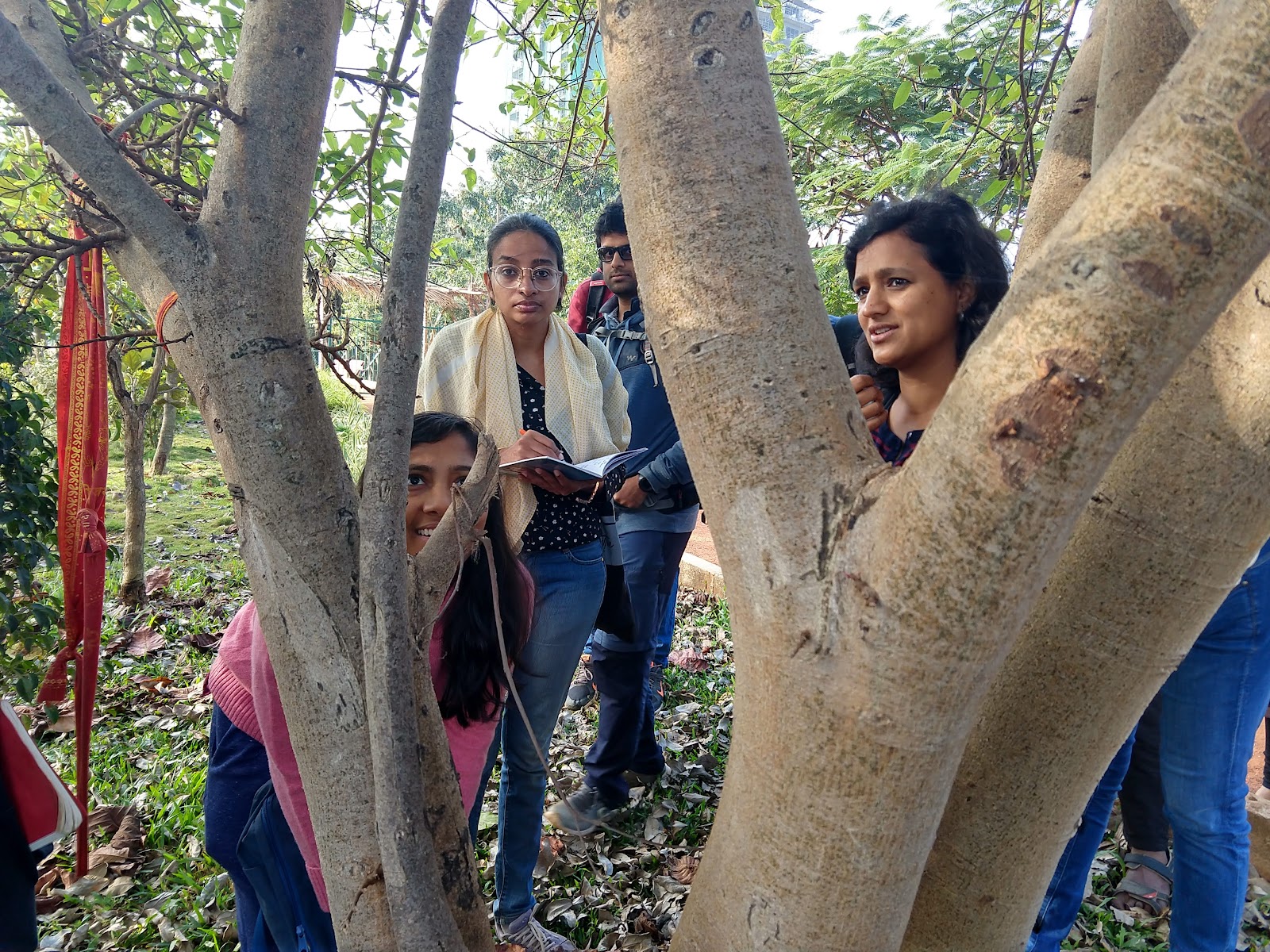 Spider which build web can be seen on the web or away from the web but they are always connected to their web.  Few of the spiders which we saw were

Orchard orb weaver - This is a web building spider. The web is in the shape of a wheel or orb.  They are found in shrubs and build the web at an angle. Usually one can spot the spider sitting at the center of the web which is called the hub. When a prey gets trapped in the web they inject venom which has enzymes to liquify inside parts of the prey.  The spider then sucks the liquid of the insect leaving the exoskeleton intact.

Tent web Spider - The web of a tent spider is more complex than the orb weaver.  It looks like a tent, has scaffoldings and a platform at the bottom. This helps to entangle the prey betten and an effective defence against predation. 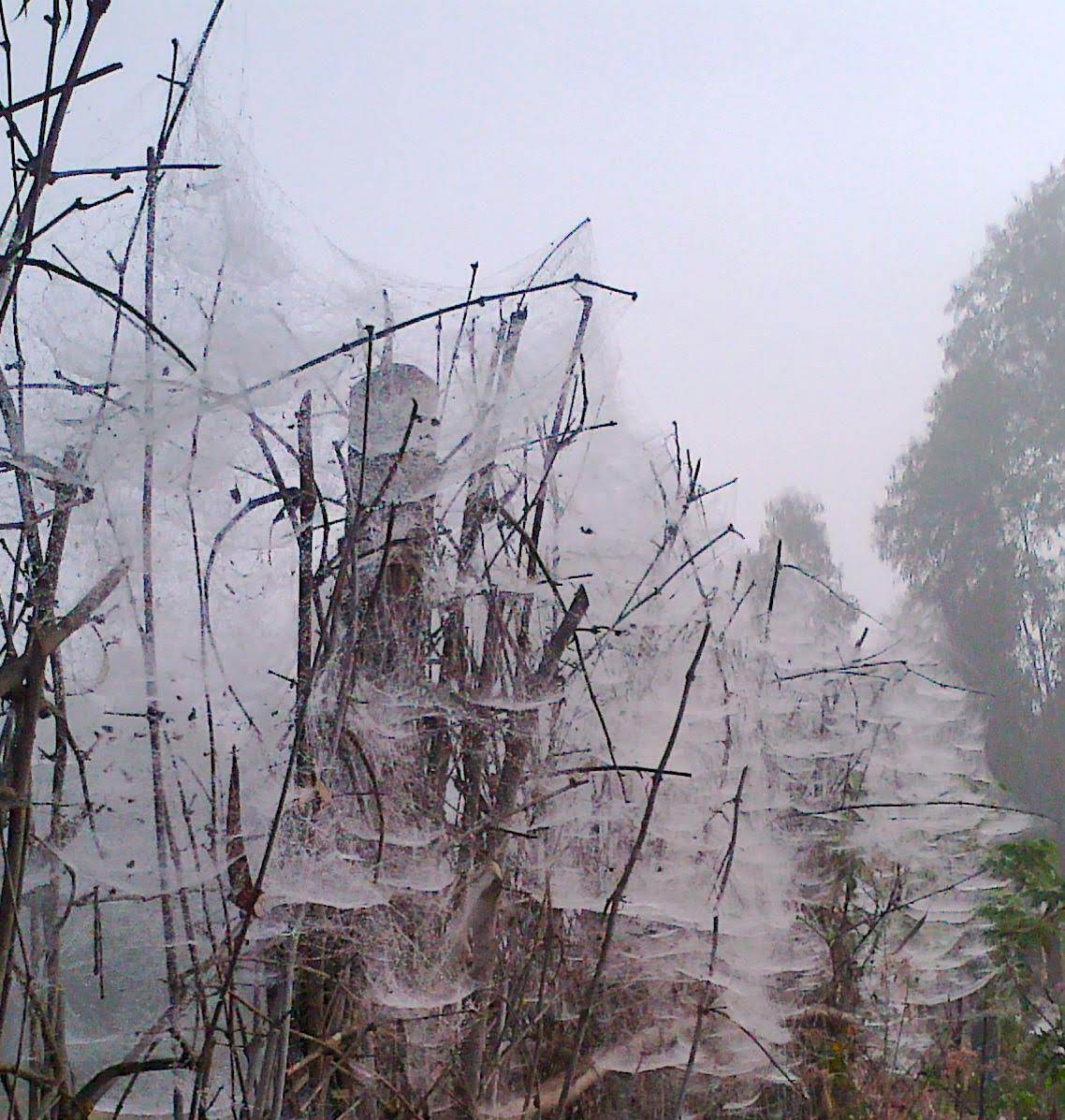 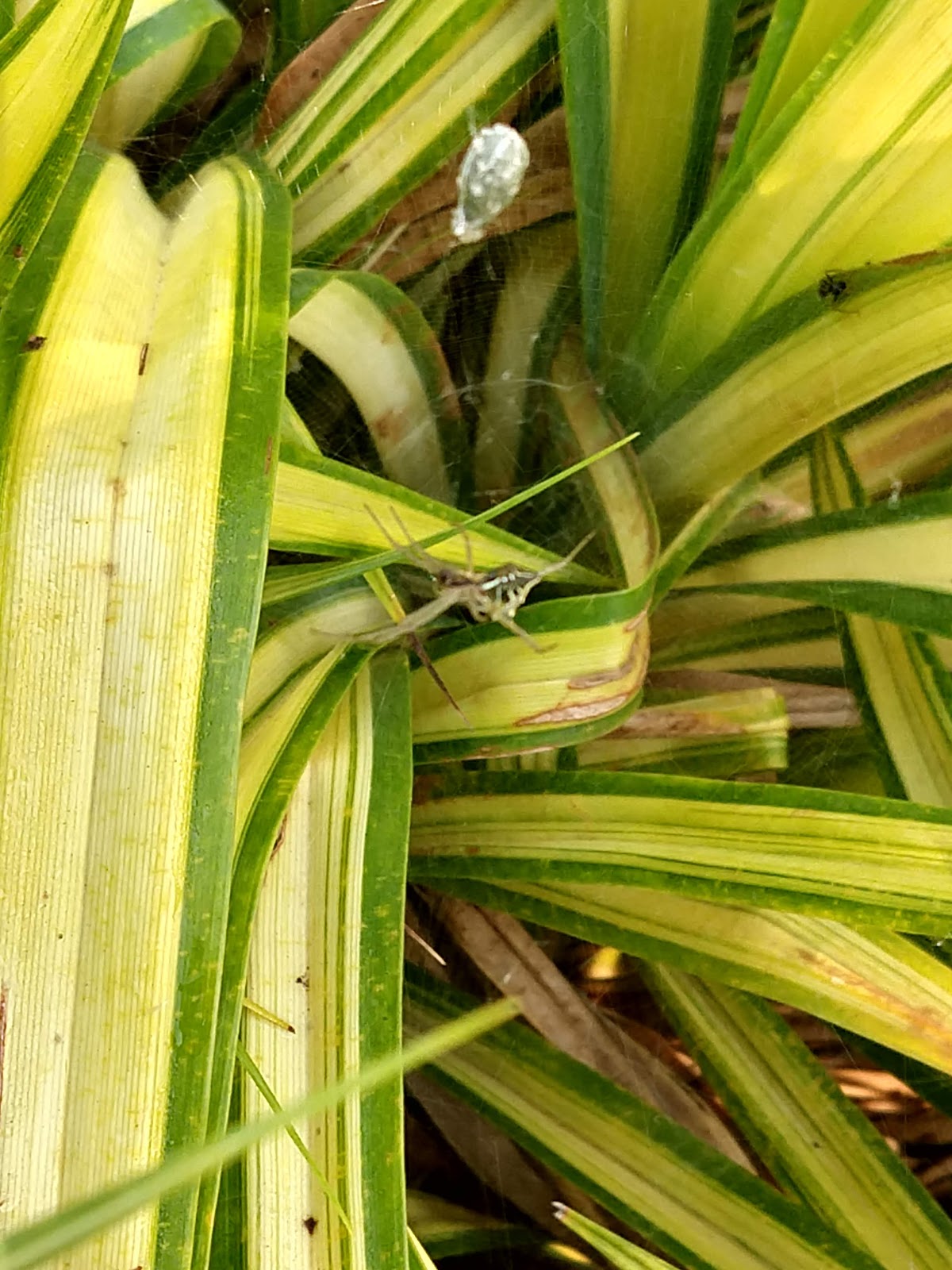 Cross Spider, Signature spider : They have their tipical signature  - the zig zag pattern which is called the stabilimentum.  They are called cross spider as they sit in the shape of ‘X’. 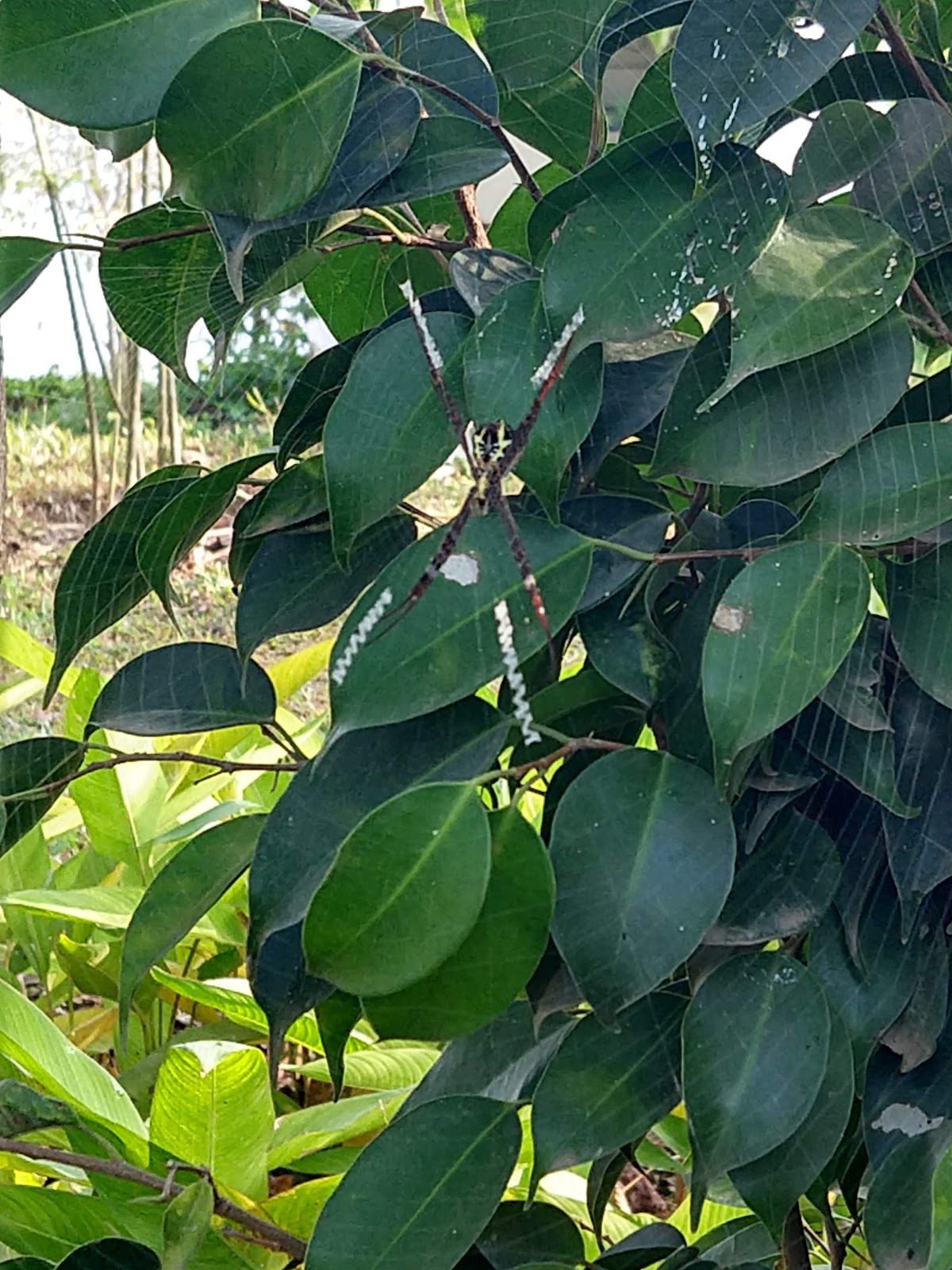 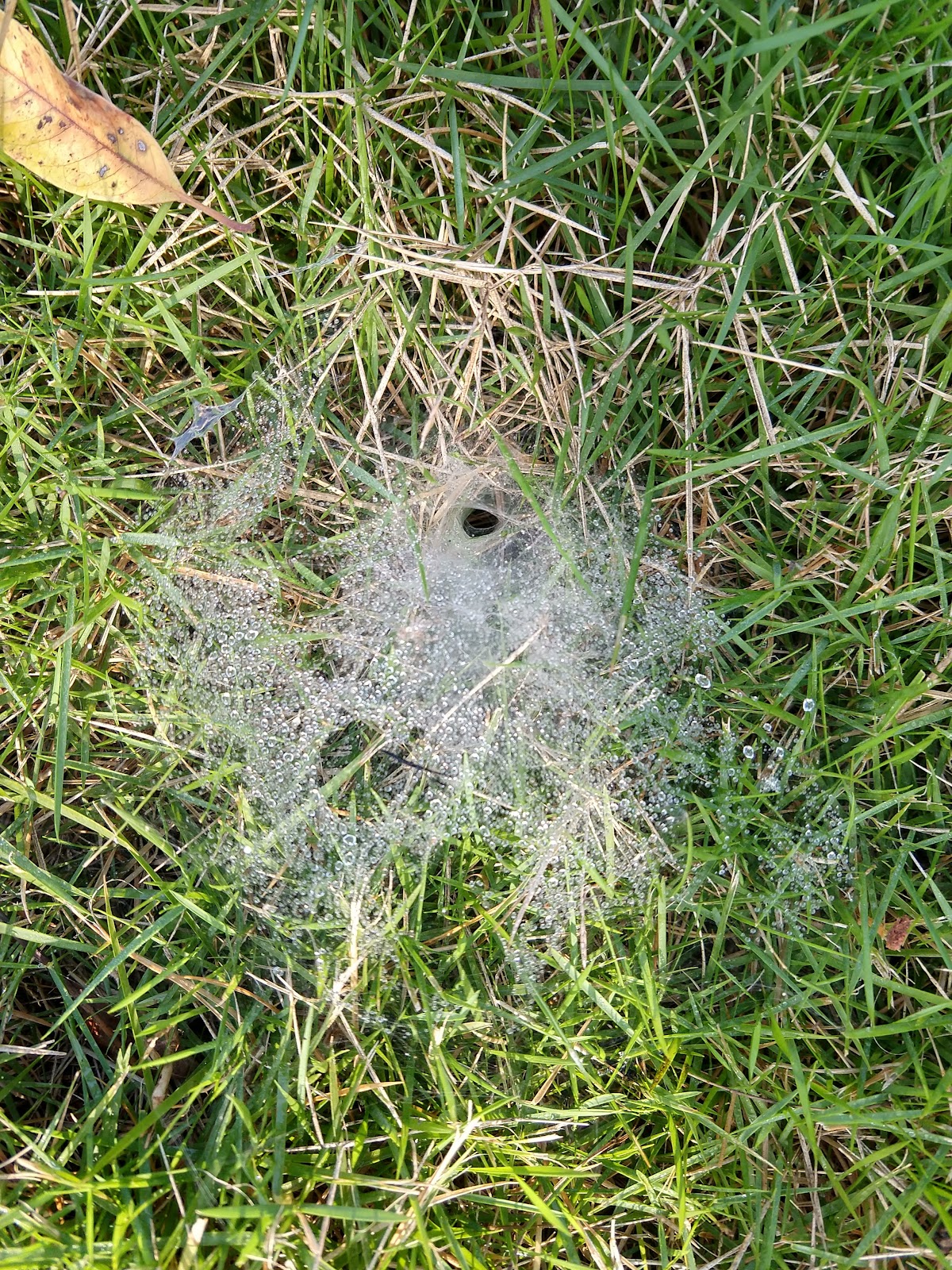 Sheet web spider - Found on the ground level.  This also has a tunnel where the spider is found.

Comb footed spider - have a random shaped web which crisscross.

Social family spider - These build thick webs which are sticky then other spider webs. A  group of related individuals live together to hunt large prey and repair the web. Sometimes they bring up young once. There is ongoing research on to understand their behaviour better. 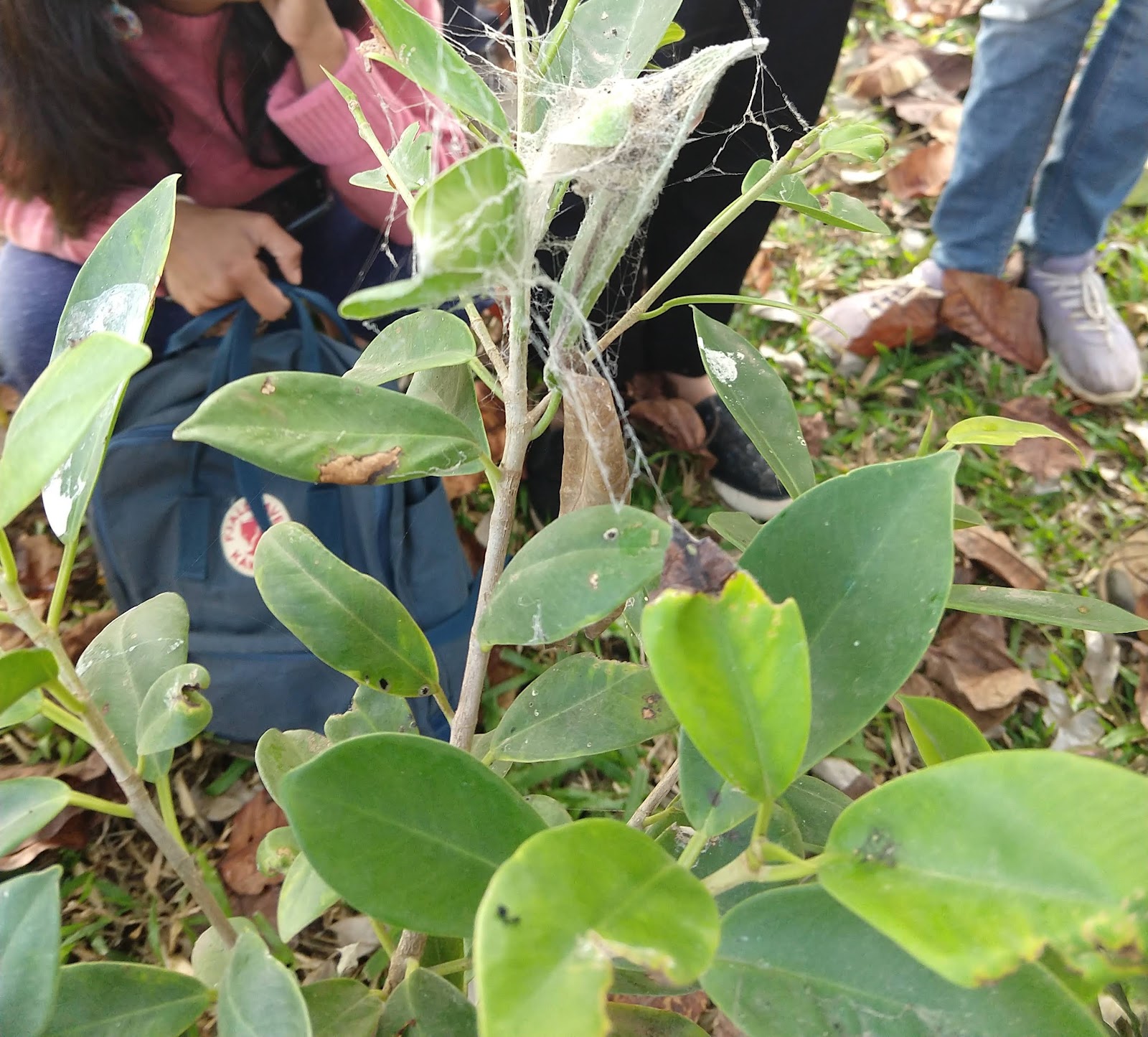 Candy striped Jumping Spider - Do not build webs. They jump to catch their prey.  They stalk their prey like cats. They have the best eyesight amongst spiders. The egg sacs are under leaves and they build web around it to protect it. 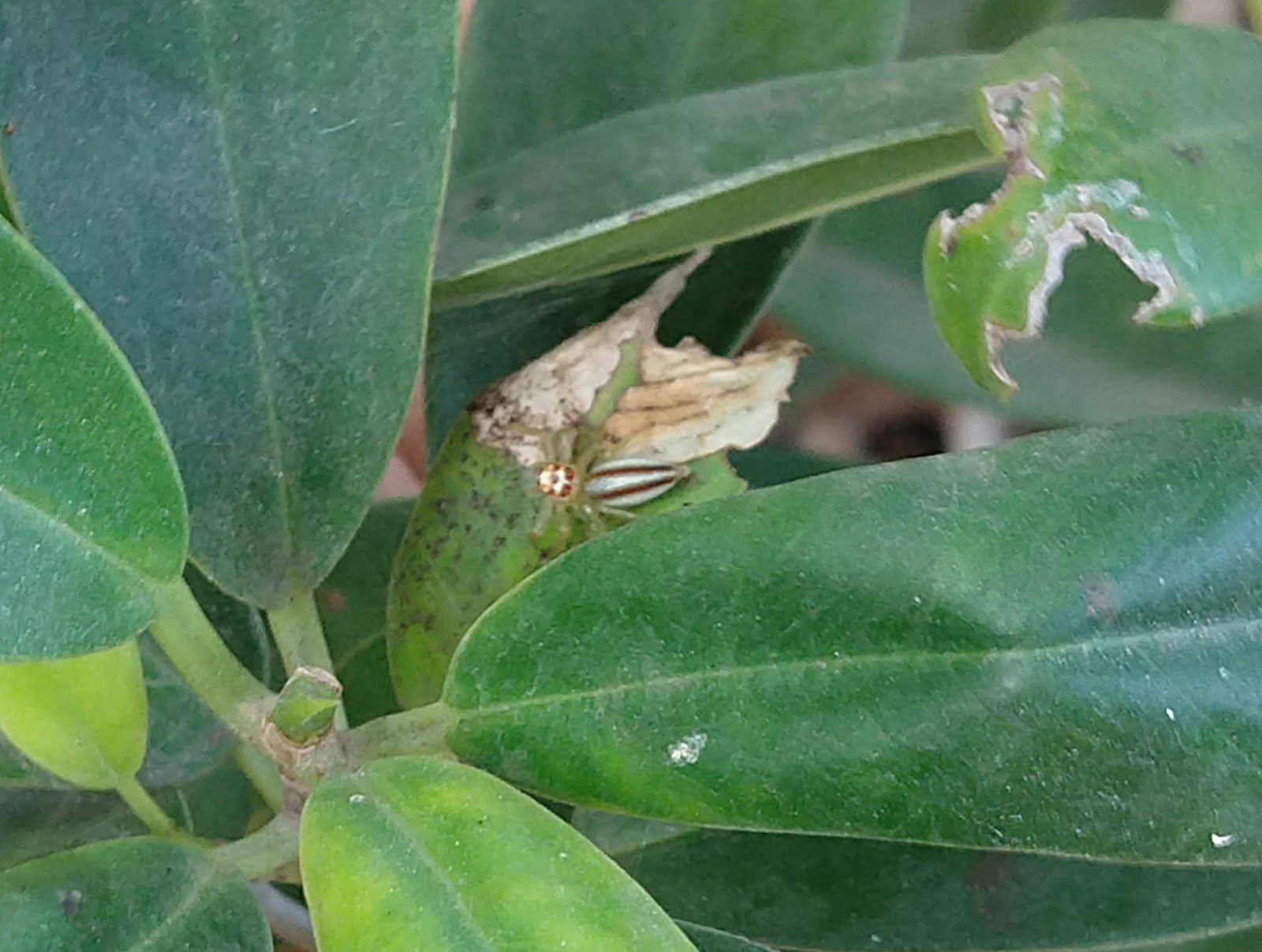 Candy striped jumping spider
Common two tail spider - In the pic below she is sitting on her egg sac.  The white fuzzy layer is silk protecting the egg sac. These are found on the bark of the tree, a great example for camouflage. The two long tails are the spinnerets. She has six eyes. 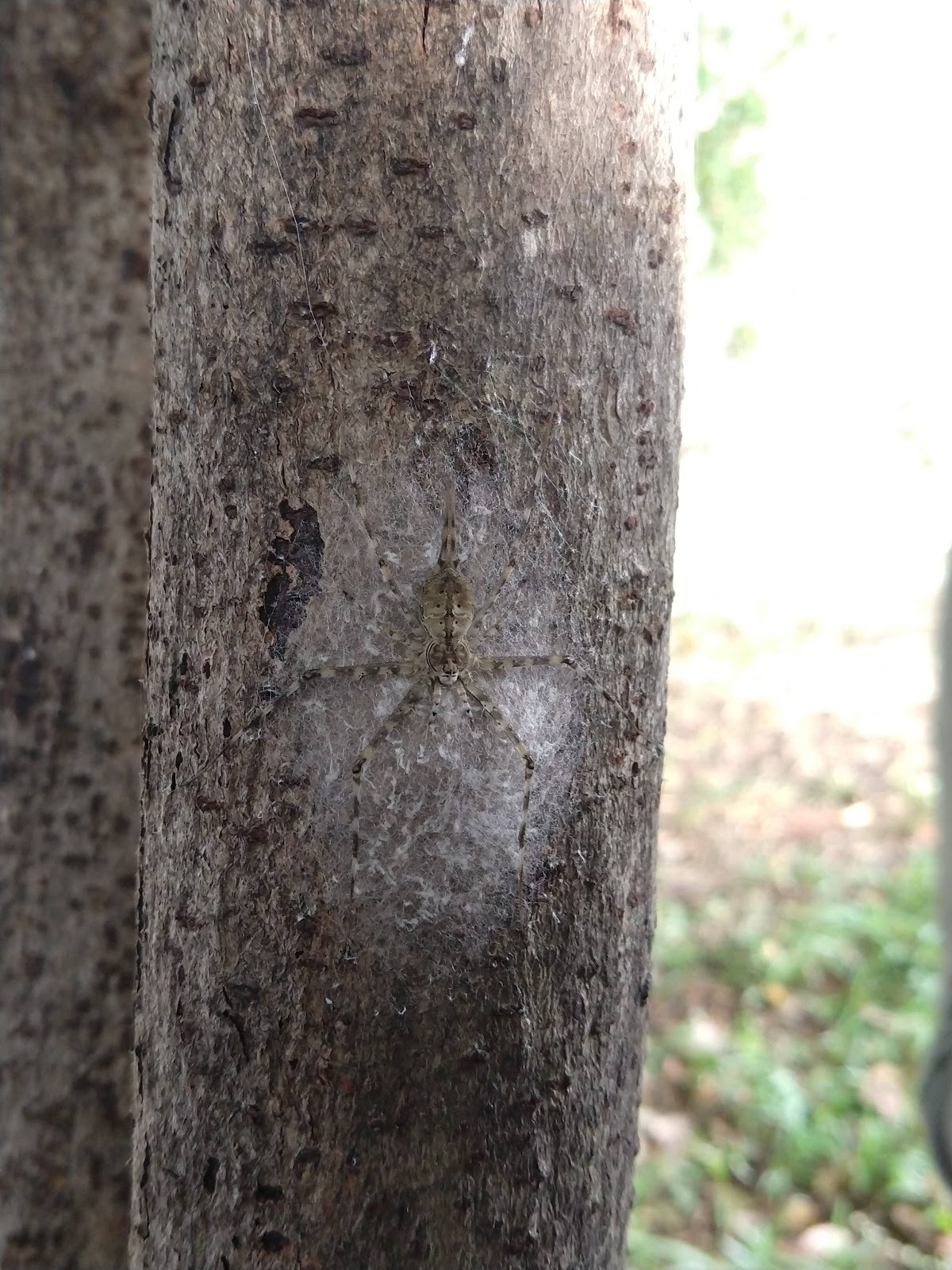 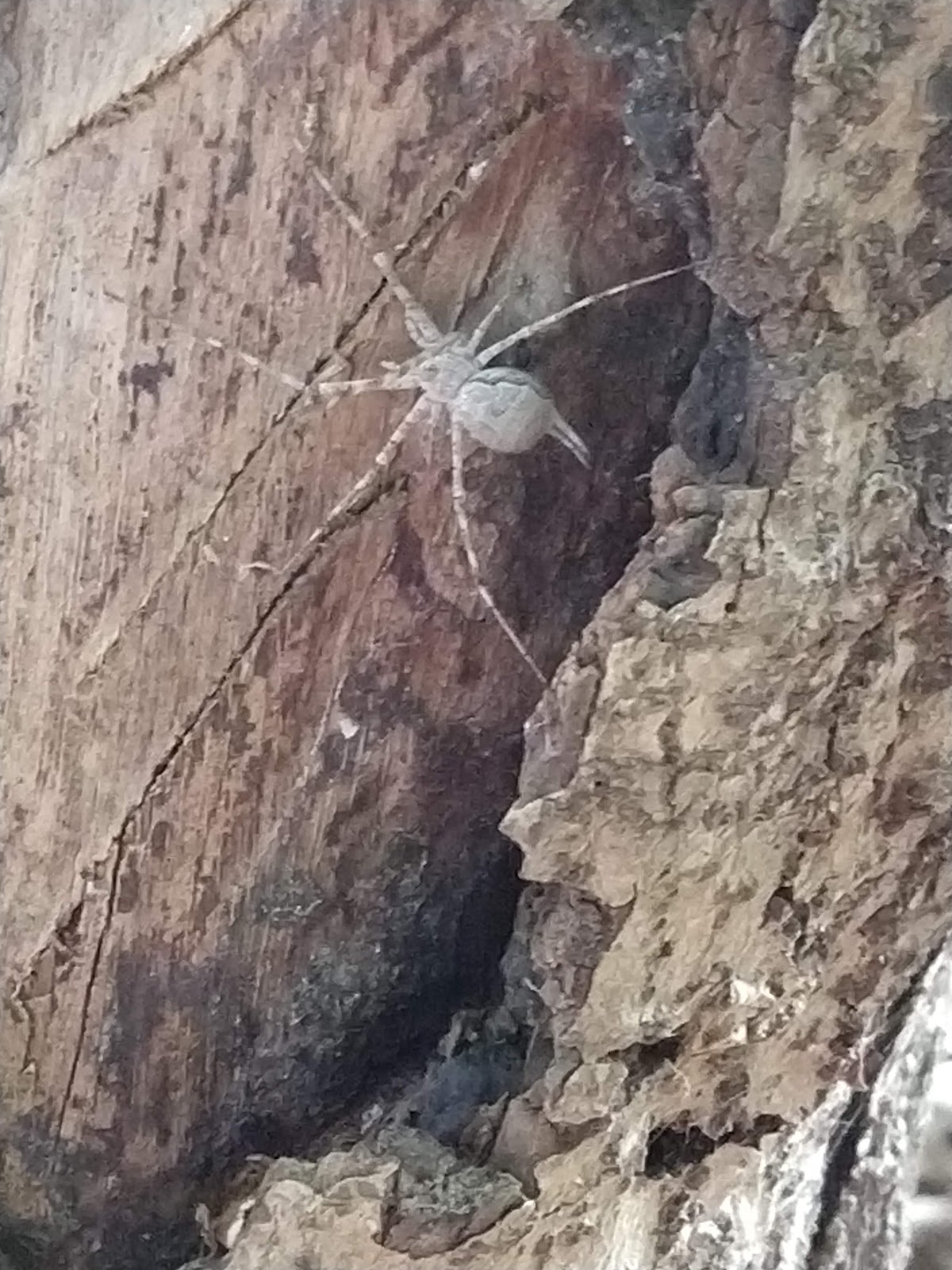 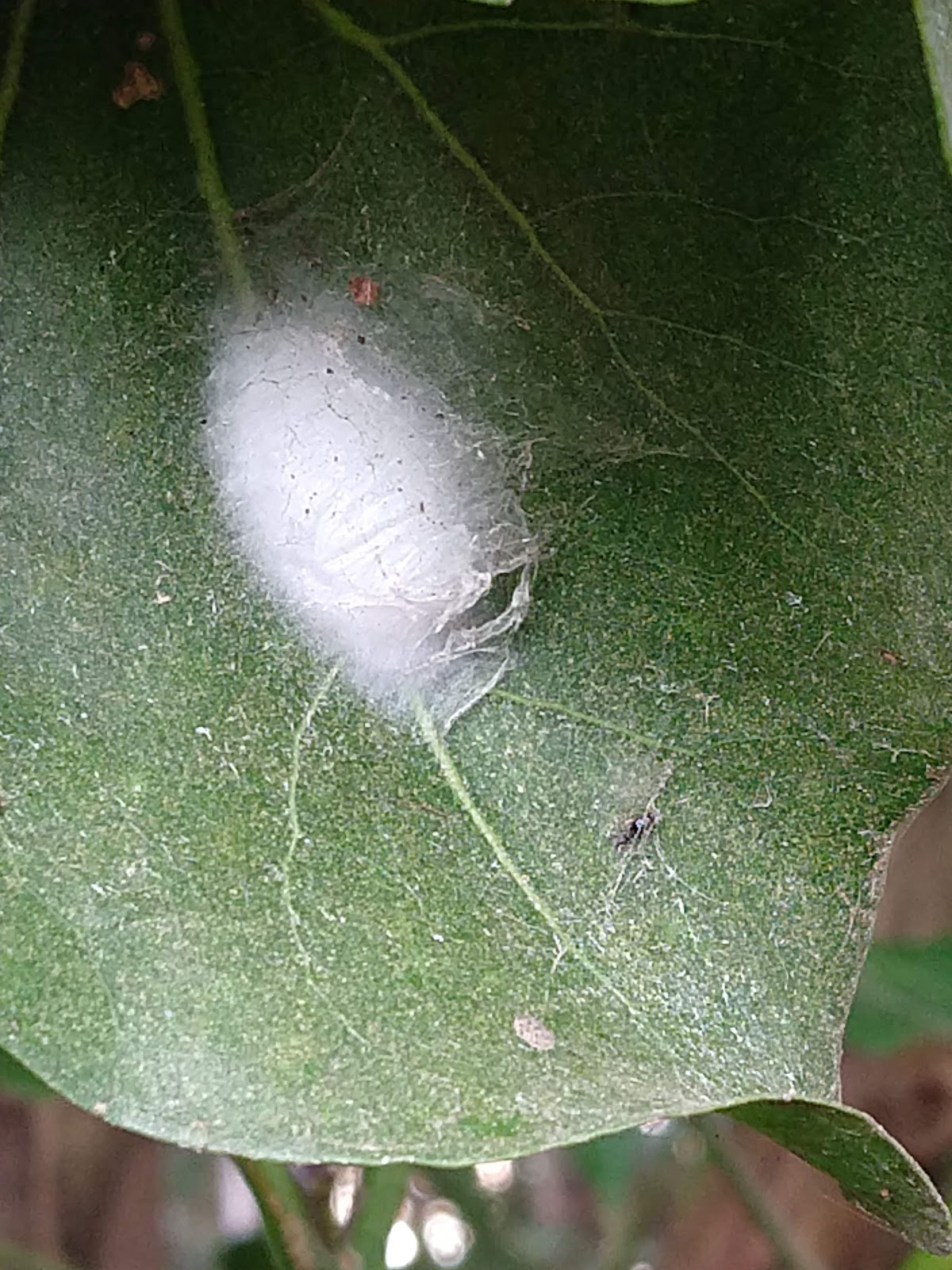 Green Lynx spider - hunting spider - Do not build webs. They are called sit and wait predators. Are usually found on hairy flowers/plants.  They sit and wait and feed on the insects which come to the flower . Below is a picture where the spider is sitting in the flower of Bixa tree. 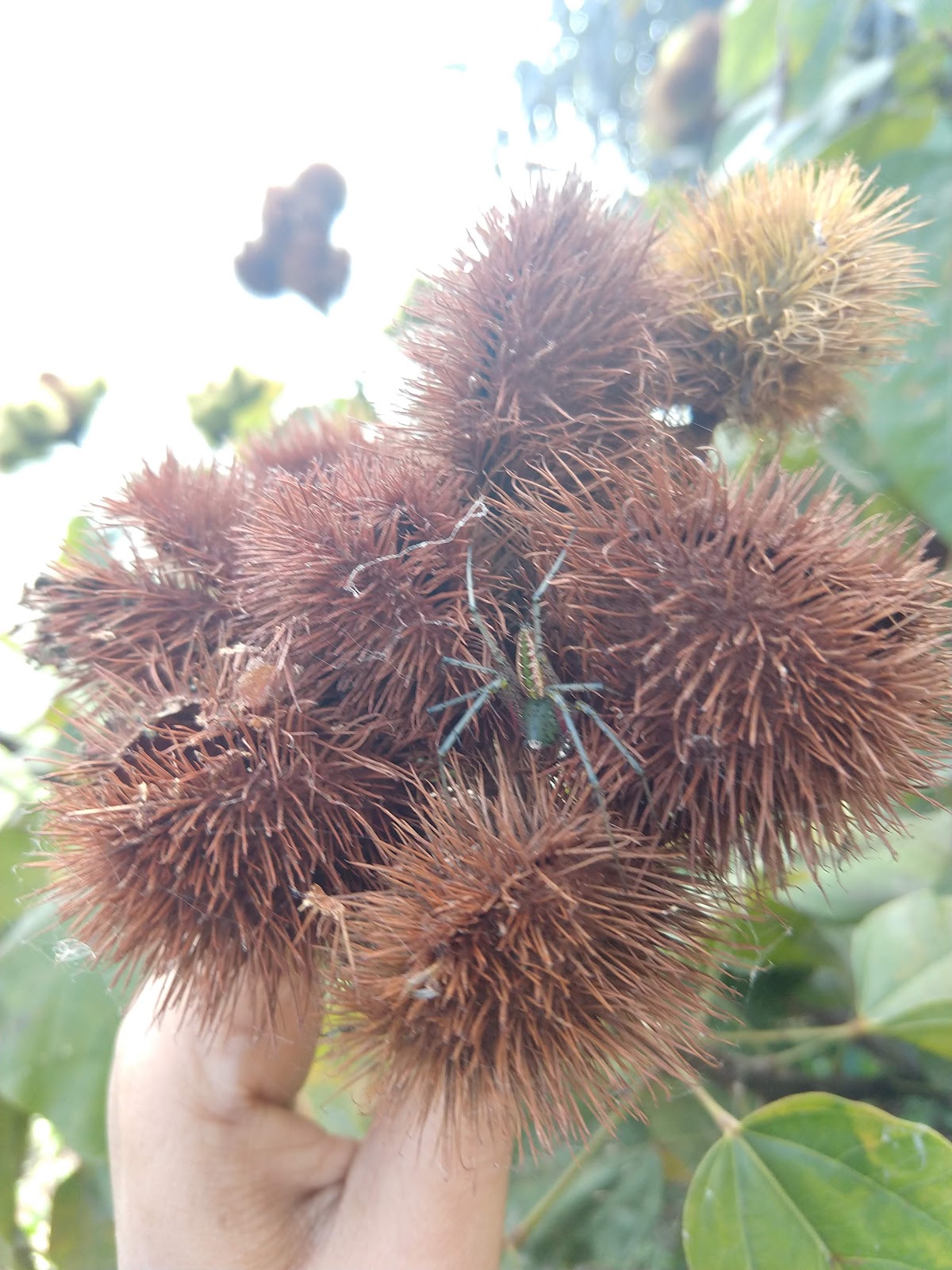 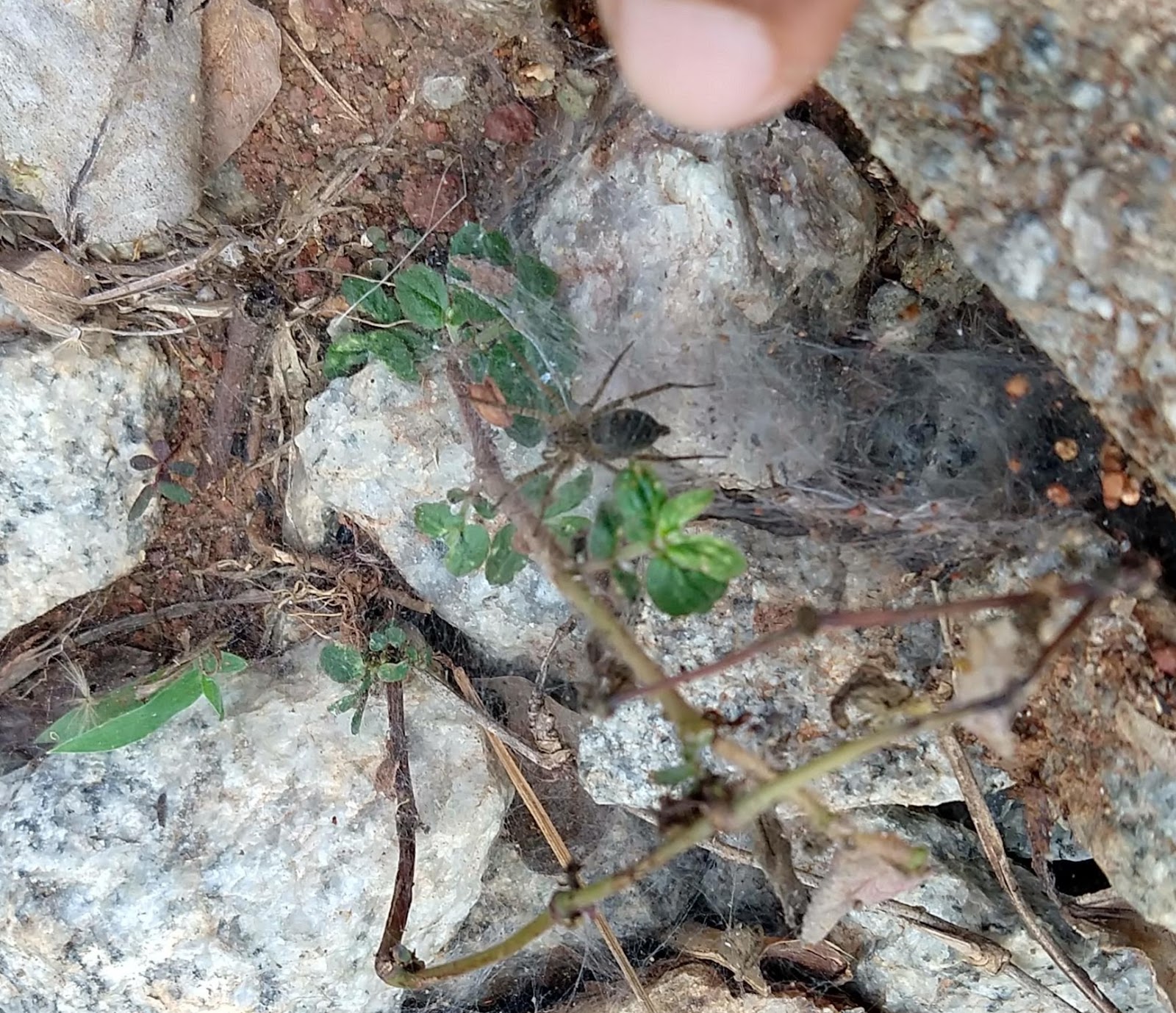 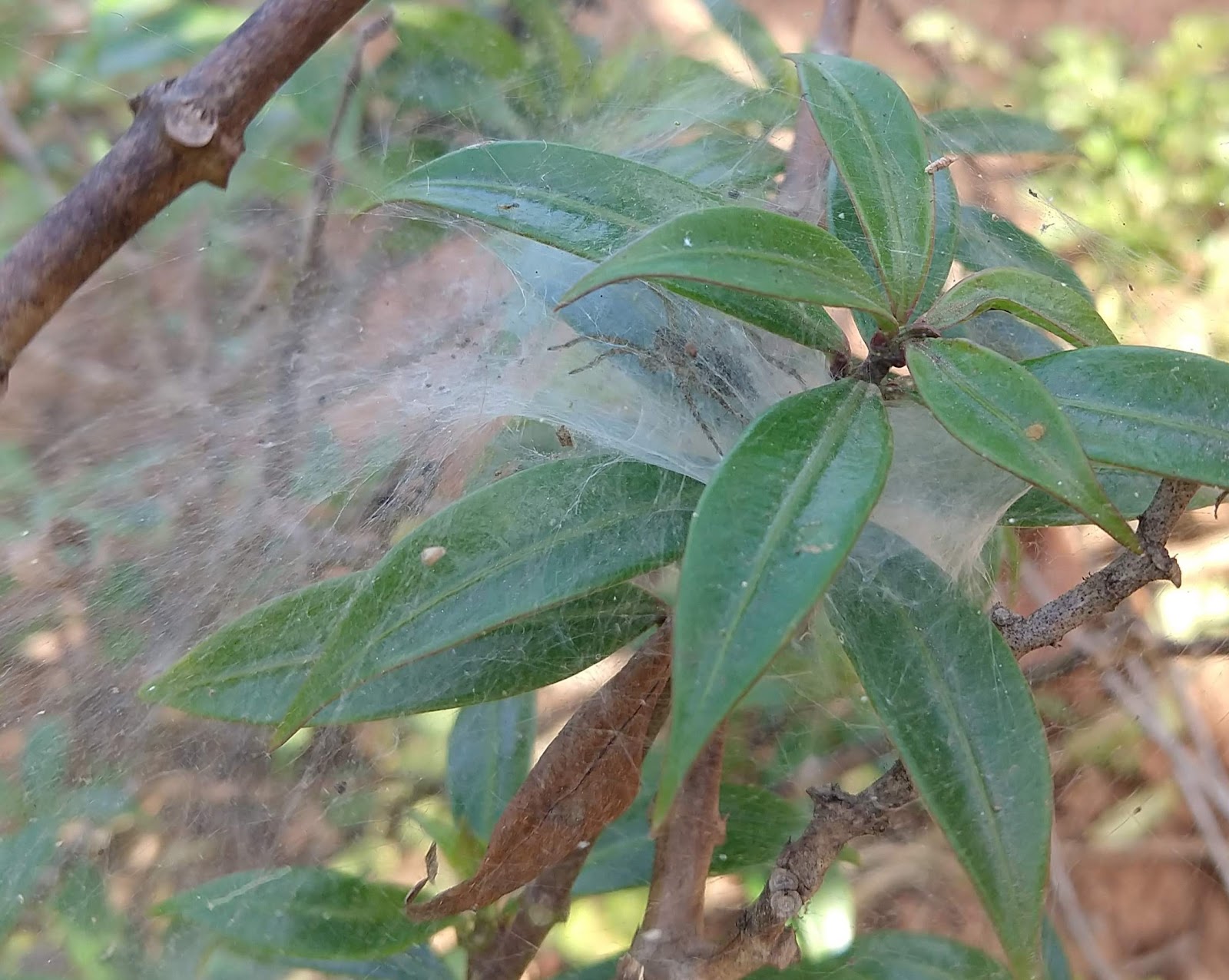 Few of the other spiders we came across were

We also got to see some insects such as

After a couple of hours of walking at the lake we headed to ATREE. After breakfast Vena shared more information about spiders. 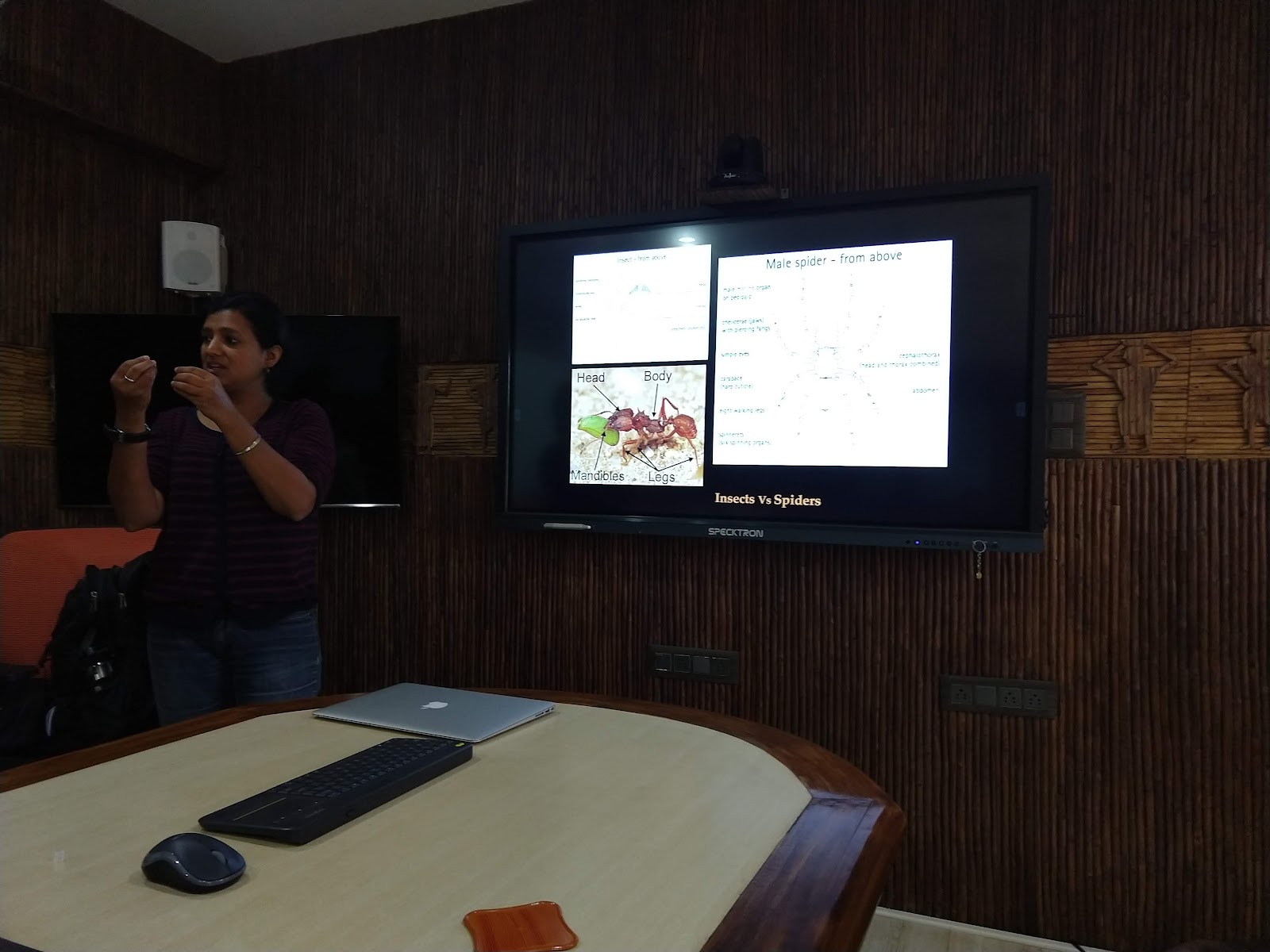 Later the participants presented and talked about the walk they conducted. They shared their learning and takeaways from it. 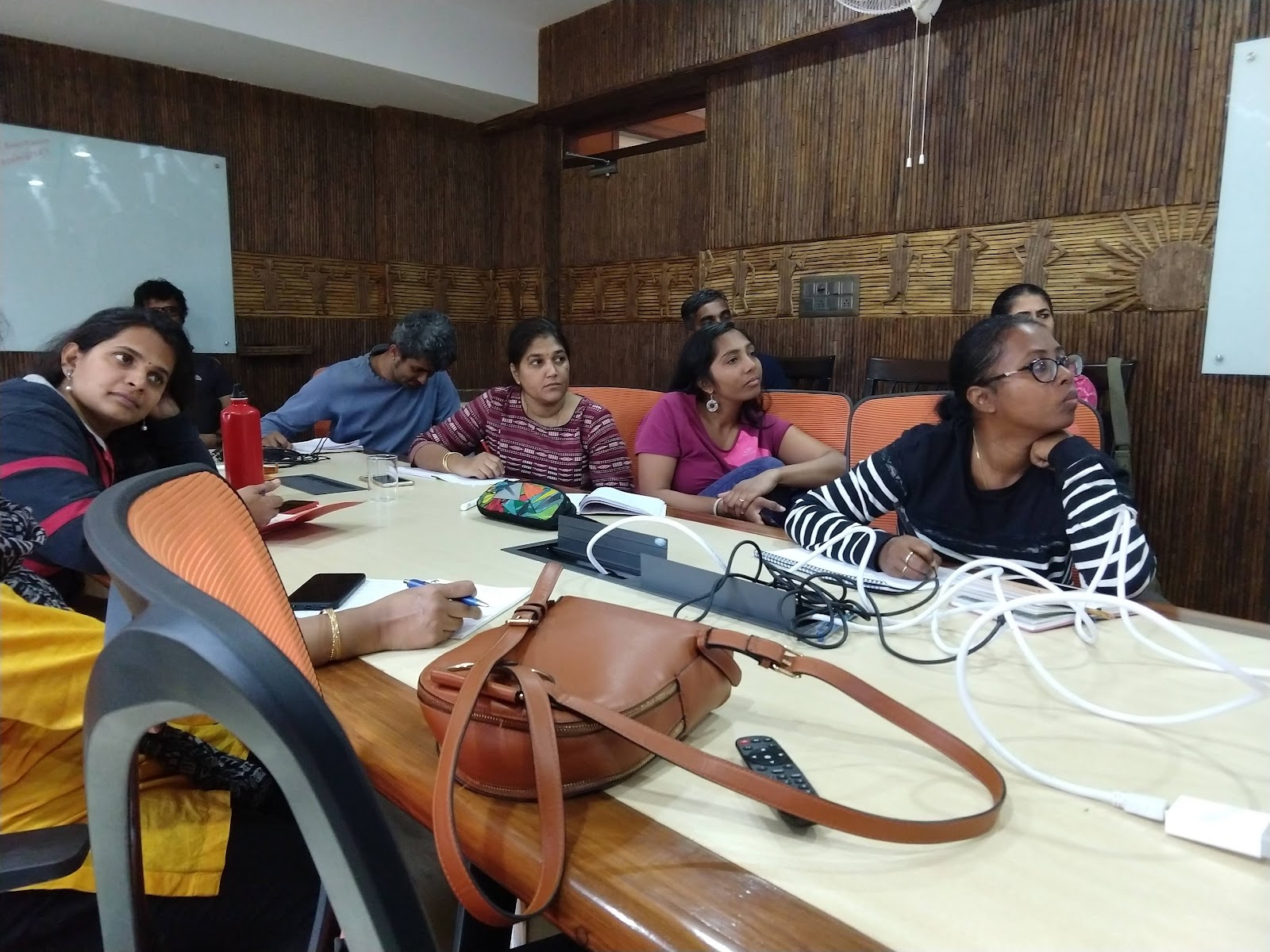 All participants who conducted a walk and  participated on both the days were given a certificate for participating in the workshop.
Posted by Biome Trust at 9:37 PM 1 comment:

Biome is working on a Bangalore Sustainability Forum (BSF) funded project to identify and revive dead zones in Jakkur lake. Dead zones are low oxygen areas in oceans and lakes that occur due to eutrophication (presence of excess nutrients such as phosphorus and nitrogen). It often negatively impacts aquatic life, since most plants and organisms require oxygen to survive.

A way to identify a dead zone is to measure dissolved oxygen (DO). DO levels of 4mg/L and above generally indicate a healthy aquatic life and DO levels less than 4mg/L indicate poor water quality and is considered detrimental to aquatic life. To test DO levels we will be using a YSI Pro20 Dissolved Oxygen handheld meter. The cost of the meter was approximately Rs 70,000 and it was purchased from Xylem Analytics, a dealer for YSI instruments in India. A picture of the DO sensor is shown below in Image 1.


We started the project in August 2019 and monitored the DO in the lake on a regular basis. We identified three dead zone areas: two near the wetland and the other in the kalyani. We will be trying different methods such as aerators and floating wetlands to revive one of the dead zones.

This is an ongoing project, which will be updated once the project is completed.
Posted by Biome Trust at 3:25 AM 1 comment: