BIOME at the Simple Living Workshop organised by CGBMT: April 2022 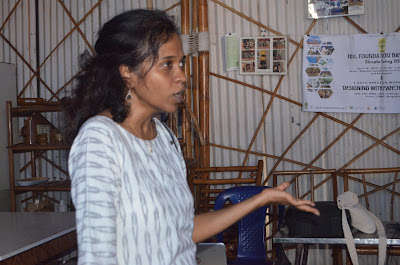 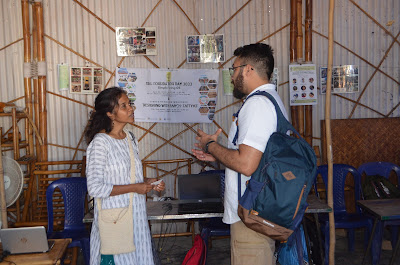 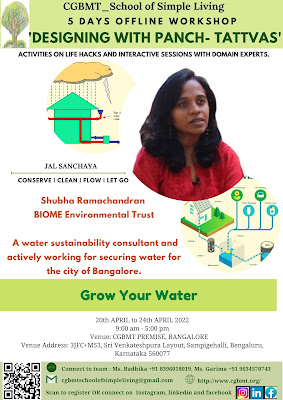 Posted by Biome Trust at 9:14 AM No comments:

The first link is for the article page and the second for the uploaded document.
Posted by Biome Trust at 8:57 AM No comments: Posted by Biome Trust at 8:42 AM No comments: 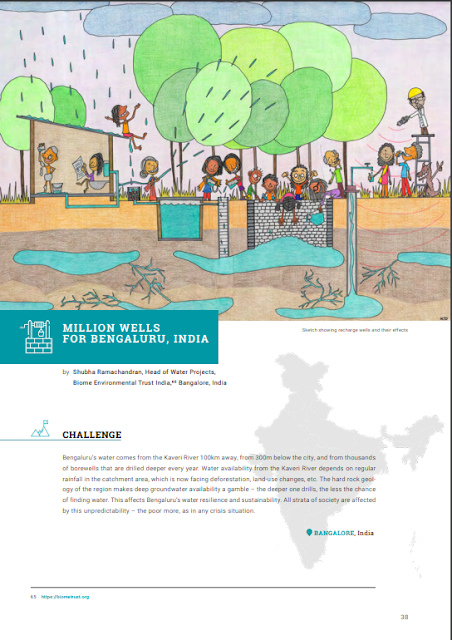 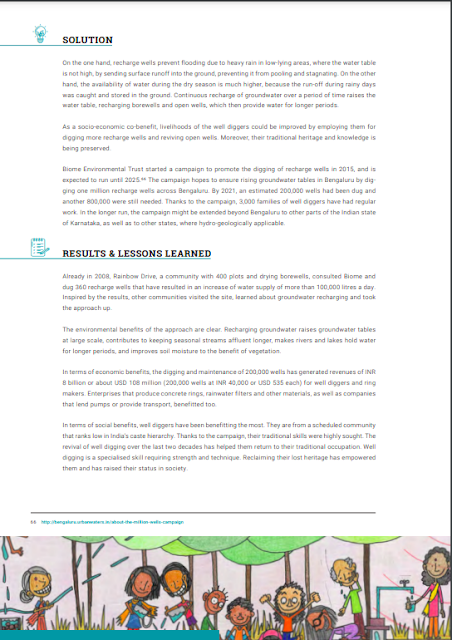 Posted by Biome Trust at 3:53 AM No comments:

Acknowledging the people on ground that make projects happen 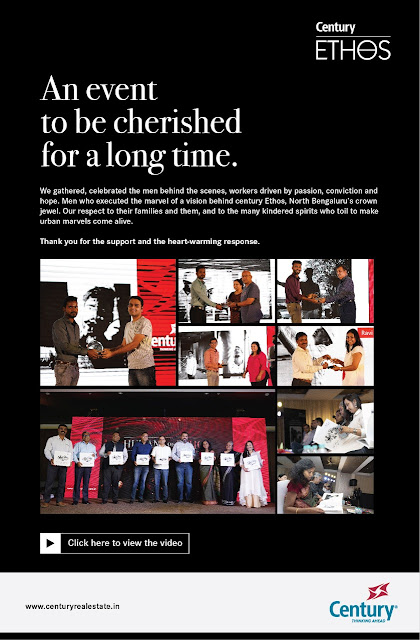 Posted by Biome Trust at 3:47 AM No comments:

Biome's stall at "Oota from your Thota"

On 28th August 2022, the 40th event of ‘Oota from your Thota’ was organized by Rotary Jalahalli in association with Hosachiguru in HMT grounds, Jalahalli. Observed on World Kitchen Garden day, the focus of this event was to promote and enable the growing of food in urban kitchen gardens sustainably.

Biome was among the invites that included a well-balanced mix of vendors, practitioners and enthusiasts. The focus was on spreading awareness about sustainable water management practices in urban spaces.

The Biome team set the assigned stall up with posters, banners, booklets and other info-graphic printed material to attract visitors. Among the hubbub of the working display models and products put up for sale, the team was pleasantly surprised to have encountered a continuous flow of visitors throughout the day. About 30 people also signed up for more details via email about our work. 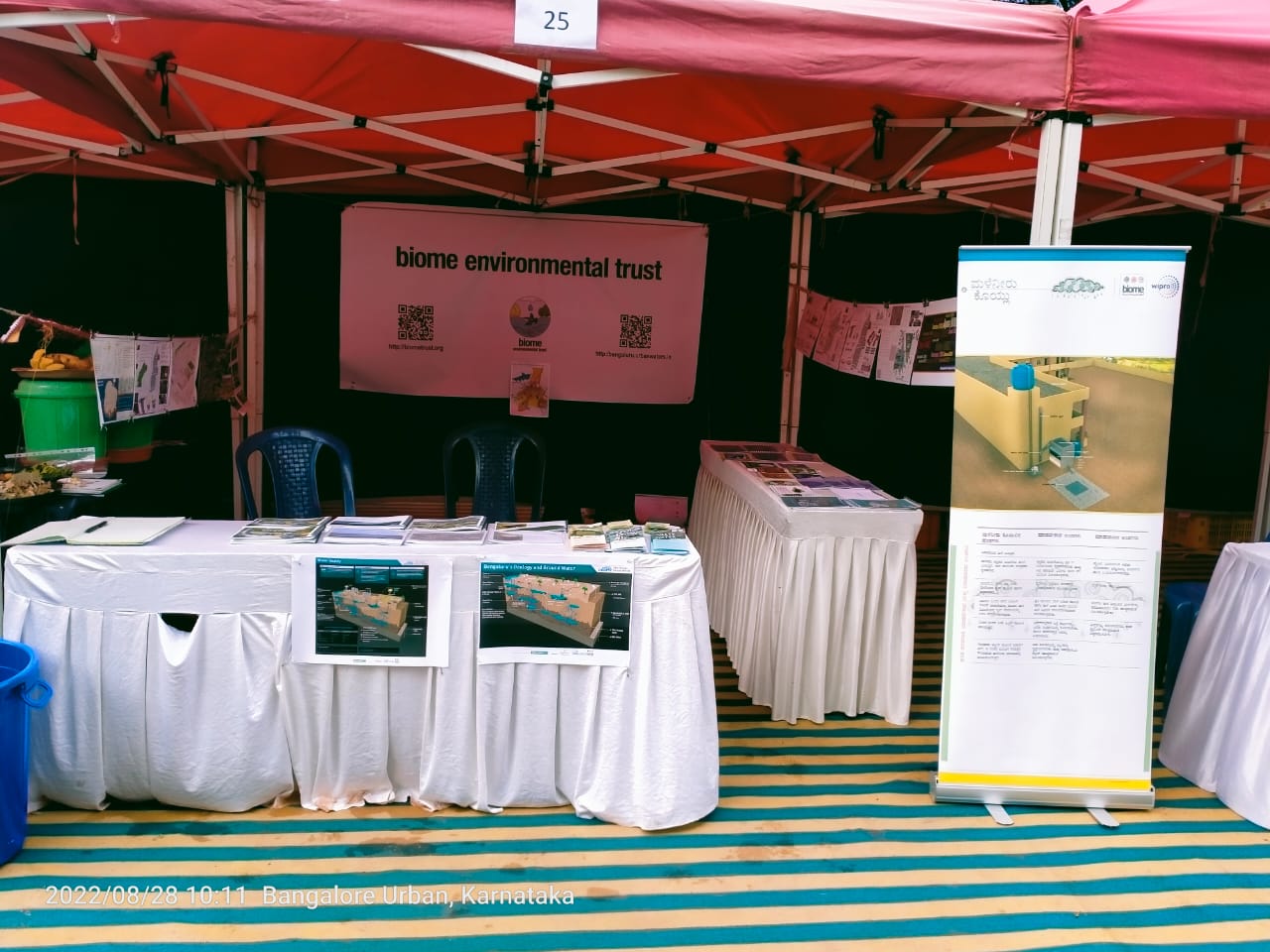 The day ended with a satisfied bunch of visitors of varied age groups along with happy Biome representatives. 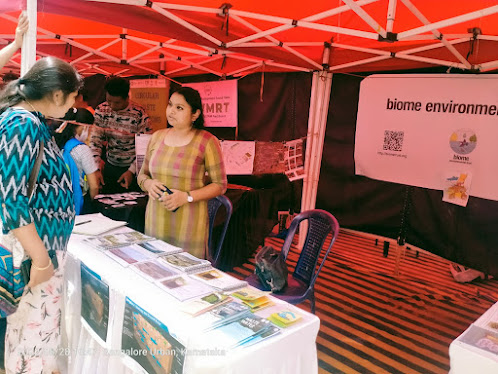 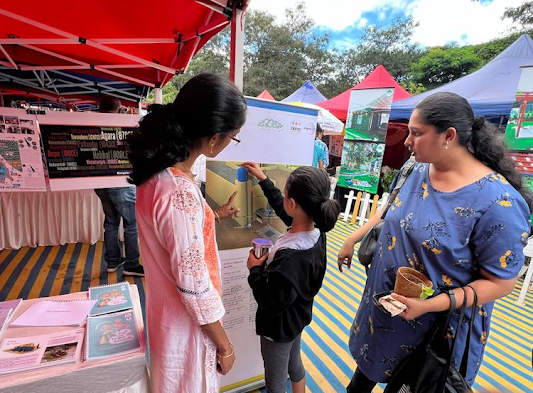 Posted by Biome Trust at 6:18 AM No comments:

As a part of the course “Ecological Living in Urban Spaces”, Biome Environmental Trust conducted a 2-day workshop on ‘Sustainability and Water’ on the 24th and 25th of August, 2022 at Bhoomi College, Bengaluru.

The theme revolved around groundwater, surface water and communities. A few days prior to this, the students had visited the gated community Rainbow Drive on Sarjapur road, to learn about the commendable water management practices they have put in place in the layout. Anchored by Mr KP Singh, this visit helped the students gain a proper context of water management in the city before the workshop began.

The first day began early with a field trip to Sowl Kere in Kaikondrahalli, which was anchored by Suma. The slight breeze and the pleasant morning sun made it a perfect morning for birdwatching and observing the lake. The objective of the visit was to understand the tank ecosystem in Bengaluru, the different functions of a lake, its design, the different habitats that develop in and around the lake and its various relationships with human communities.

The enthusiastic students, some avid birders among them, seemed to be on overdrive sharing their views, stories and experiences while Suma went through all the aspects of the lake and its ecosystem.

After what seemed to be a very short one-and-a-half hour, it was time to hurry back to Bhoomi College where some hot and delicious breakfast awaited us. After filling our bellies with some scrumptious and locally grown food, we all gathered in the lecture hall for a short introductory session by Suma, on Biome and its work on water management. Despite the lack of time, discussions about various aspects of water in different contexts kept creeping up, which were actively initiated and pursued by the students.

Following this, Srinivas took the students through a session that delved deeper into subjects like rainwater harvesting, groundwater recharge and aquifers. The subject of groundwater and its movement through the aquifers as well as it’s interactions with human societies seemed to grip everyone’s interest very strongly.

Lunch followed. An innovative and tasty lunch that was made with locally grown ingredients was served.

Post lunch, Suma dived deep into lake visioning -  the aspects that need to be looked at if one wishes to rejuvenate a lake. Political, technical and socio-economical angles were explored here.

Finally, Srinivas introduced the Million Wells campaign to the students. Its conception, progress and its vision were put forth. The day came to a close with some important discussions on the practical actions that the students could take at a personal as well as their community level for water conservation. 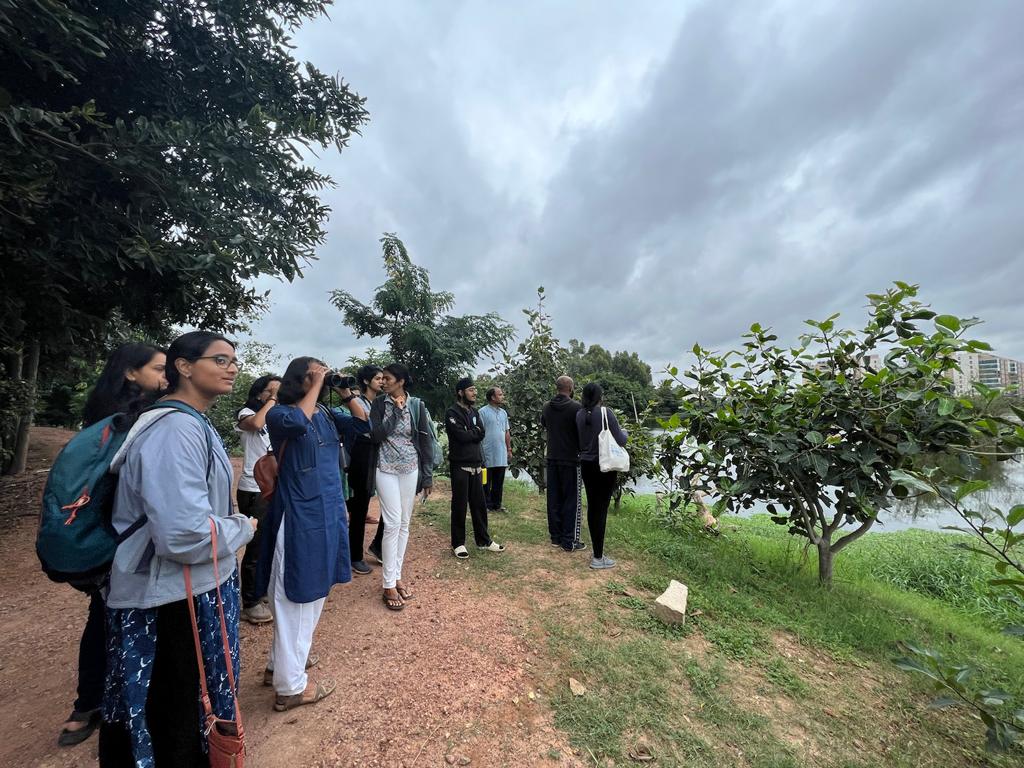 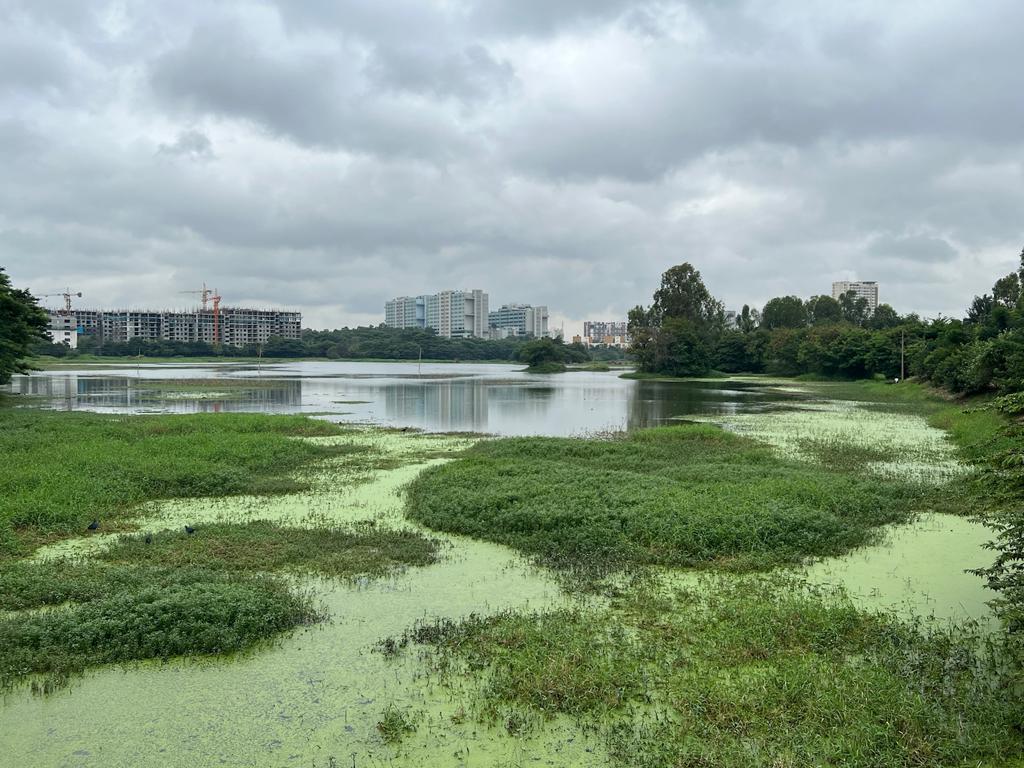 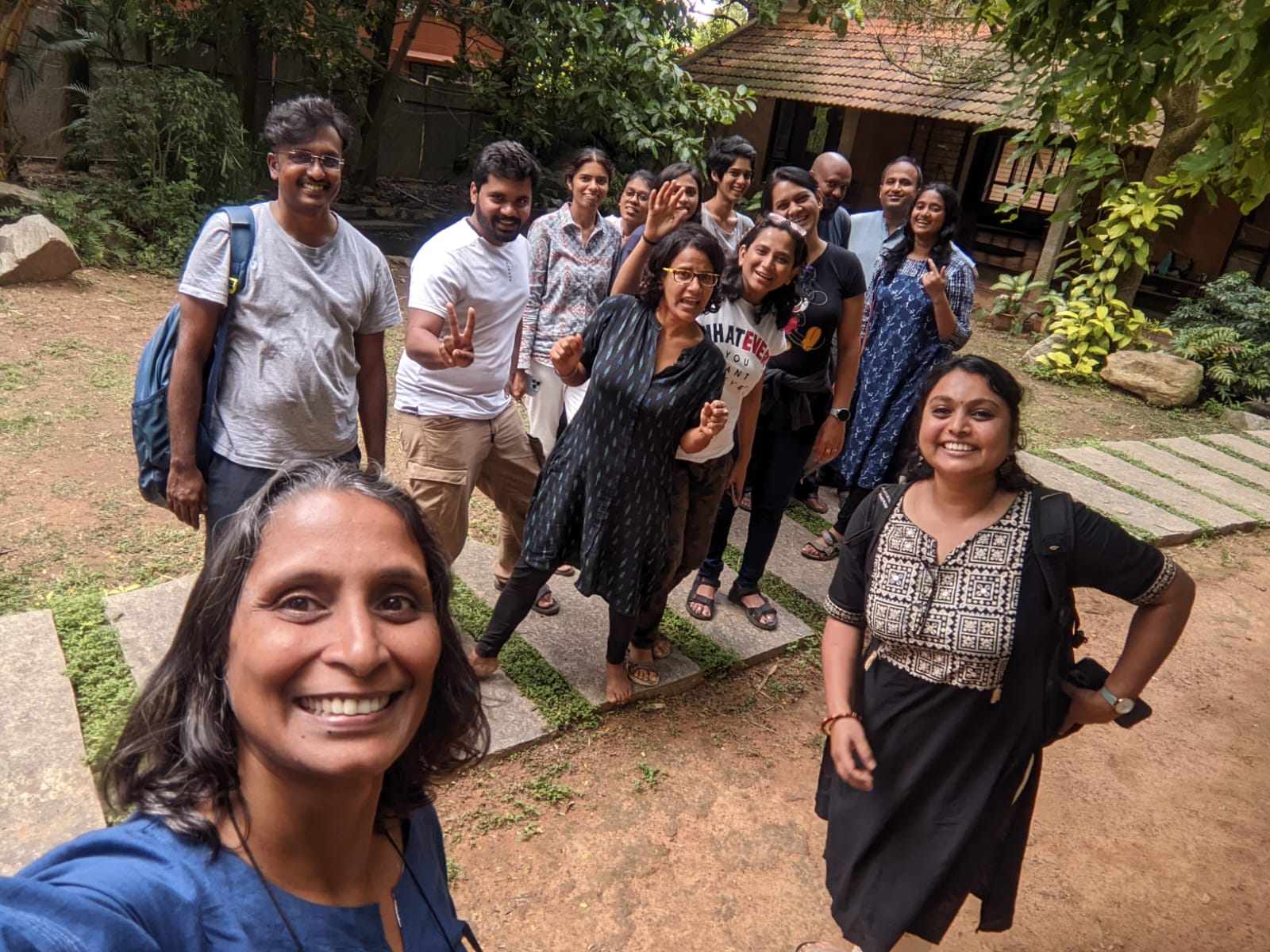 The students with the Biome team (Day1)

The agenda for day 2 was not rigidly fixed. The idea was for the day to progress organically with the sessions intended to be extremely interactive.

One of our seniors from Biome - Avinash - conducted the session for the whole day. On the students’ request, it was decided that the discussions focus on the context of the cities the students were from.

An introductory session began which, apart from the student’s name and the city/town/village they were from, called for a story on water in their city/town/village. Interesting stories started to emerge. One student wondered how she would convince her fellow villagers to conserve water in a state with abundant water. Would she even have to? While another wondered why she was being forced to pay for municipality water when her well was full. Yet another wanted to know how to stop his mother from over-watering the plants while another was on a pursuit to find his human connection to water beyond the tap. Story after story emerged that led to discussions on topics like ecological conservation and responsibilities of the citizens, governance and politics. Right to water or responsibility for water was highly debated. The concept of our relationship with water and in turn with all the other creatures on earth was discussed extensively. The conversations took high turns and led to deep insights. The story of the evolution of human societies in the last few decades became the focus of the discussion.

This engrossing discussion had to be cut short at 11:15 am for a short tea break followed by a visit to Prakriya School. This school shares its campus with Bhoomi College. Prakriya School has implemented various water management systems that include rooftop rainwater harvesting, groundwater recharge in the form of small ponds and recharge wells and natural greywater treatment systems. The students were taken around these systems to see their working implementation.

Lunch followed. Full stomachs, however, did not diminish the students’ enthusiasm. Discussions from the morning session continued. Avinash showed them a video of his visit to Meghalaya to portray how human relationships develop with water and how “convenience” can sever this relationship.

The day ended with deep insights into the story of water. The students, as well as the anchors, thoroughly enjoyed the workshop, taking away shared experiences, thoughts and deeper questions about water. 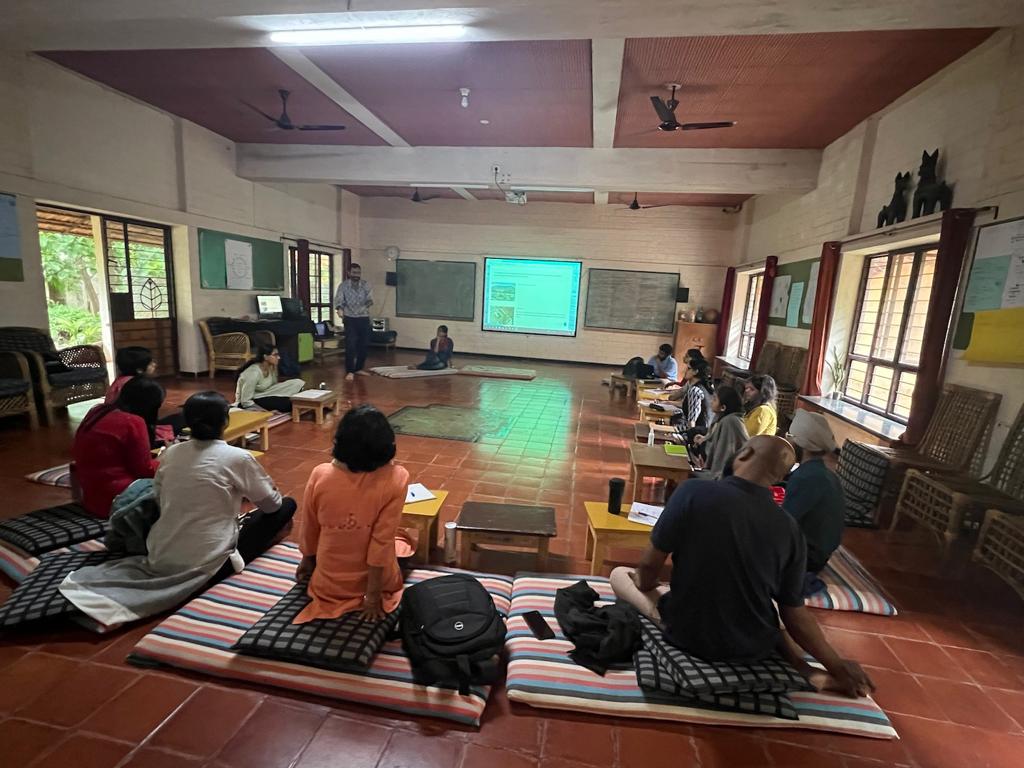 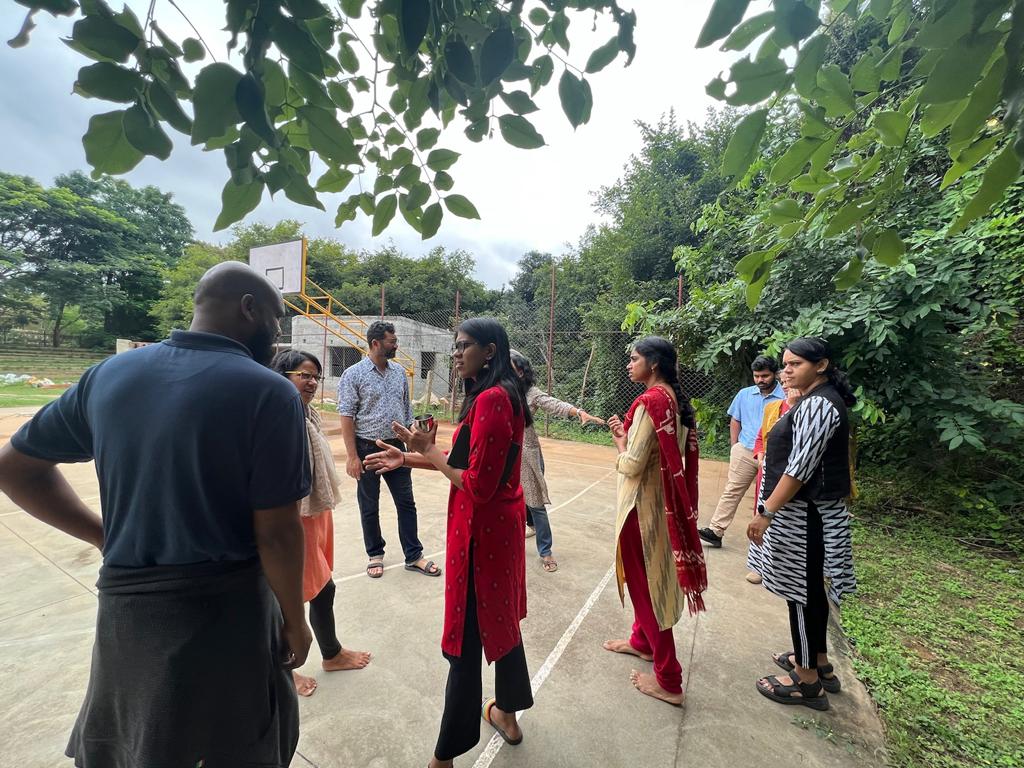 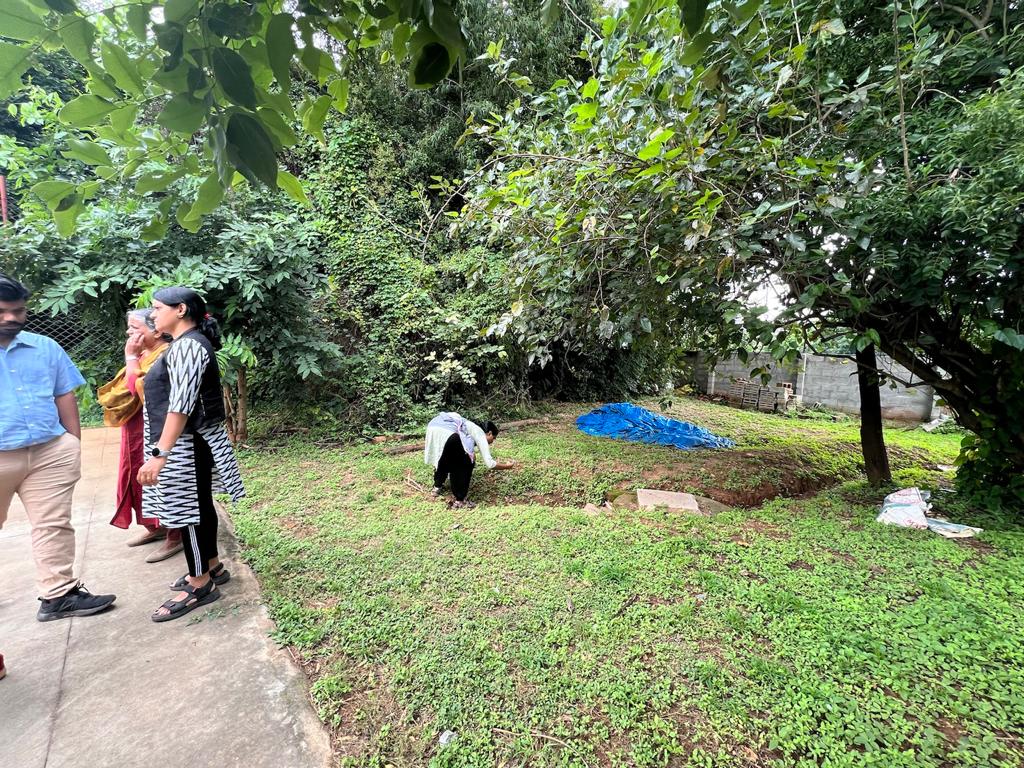 Discussions about the recharge well 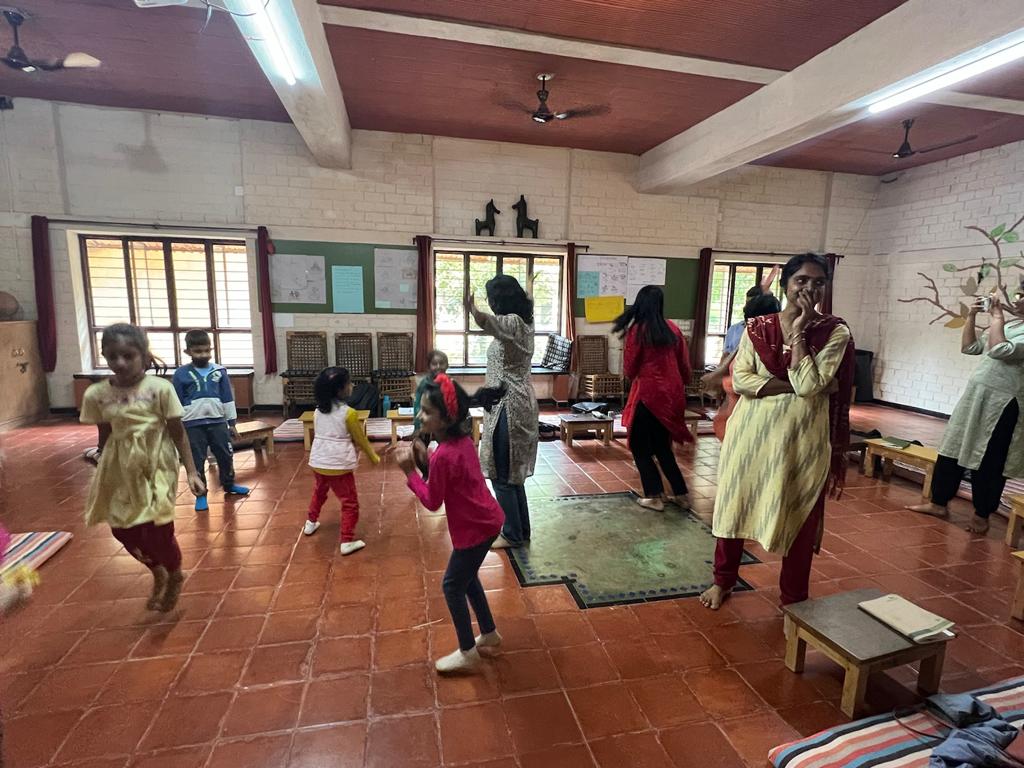 Having some fun during the break 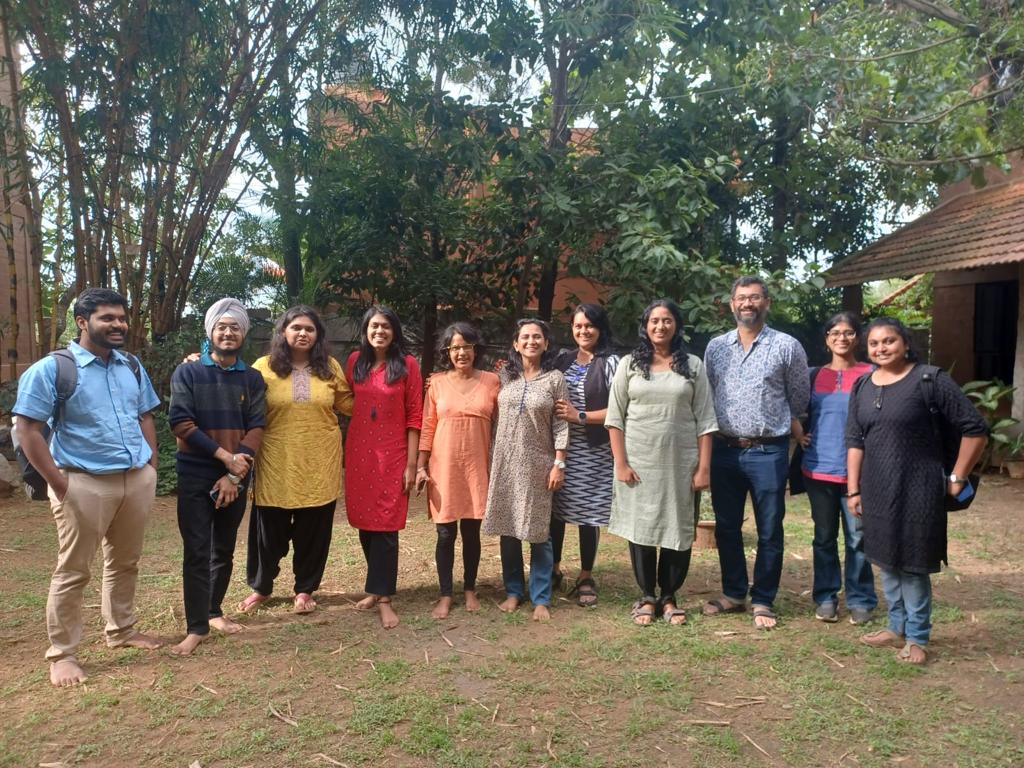 The students with the Biome team (Day2)