Authored by Shreyas Sati and Alana Helin as part of the BIOME Trust Wetlands & Lakes Project
Summary
Dasarahalli Lake is situated on approximately 20 acres of land located in Dasarahalli, Bangalore just south of the Dasarahalli Metro Station. A 1 MLD STP was constructed in 2013 which discharges treated water into the lake. In addition to the treated STP water, there are five more inlets into the lake - all of which would discharge untreated storm and sewage water into the lake. Water from the naalas which is in excess of the STP’s capacity will flow through a diversion culvert to the next lake. During our visit on 4 July 2017, we observed that there are no constructed wetlands but one region that is separated from the main lake body in order to capture trash and other debris without letting it enter the lake. Note for map below - N: Naala, I: Inlet, POI: Point of Interest. Map labels match up with corresponding legend element. Top of map is north. 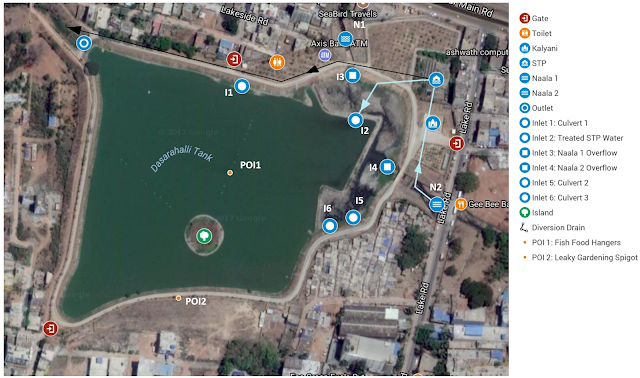 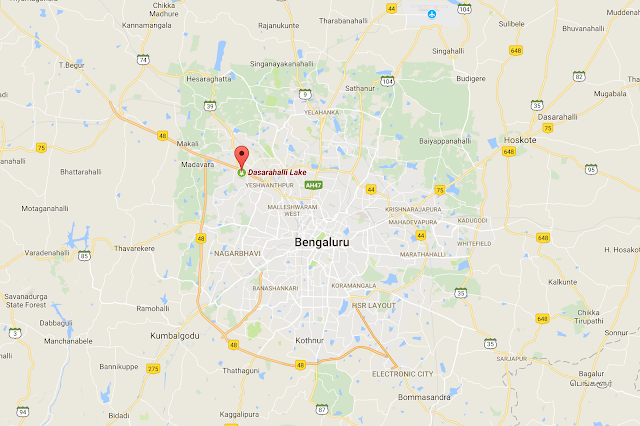 Overview and Observations
Dasarahalli Lake is located on about 20 acres in Dasarahalli, Bangalore. It is reported that in 2013, an activated sludge STP of 1 MLD had been commissioned. There are six sources of potential inflow into the lake and one outflow from the lake.


This lake is owned and maintained by the BBMP. There are three entry points into the lake premises. These entrances are in the north, east (main entrance), and southwest parts of the lake. Near the main entrance, there is a small kalyani which will be filled with water for idol immersions. 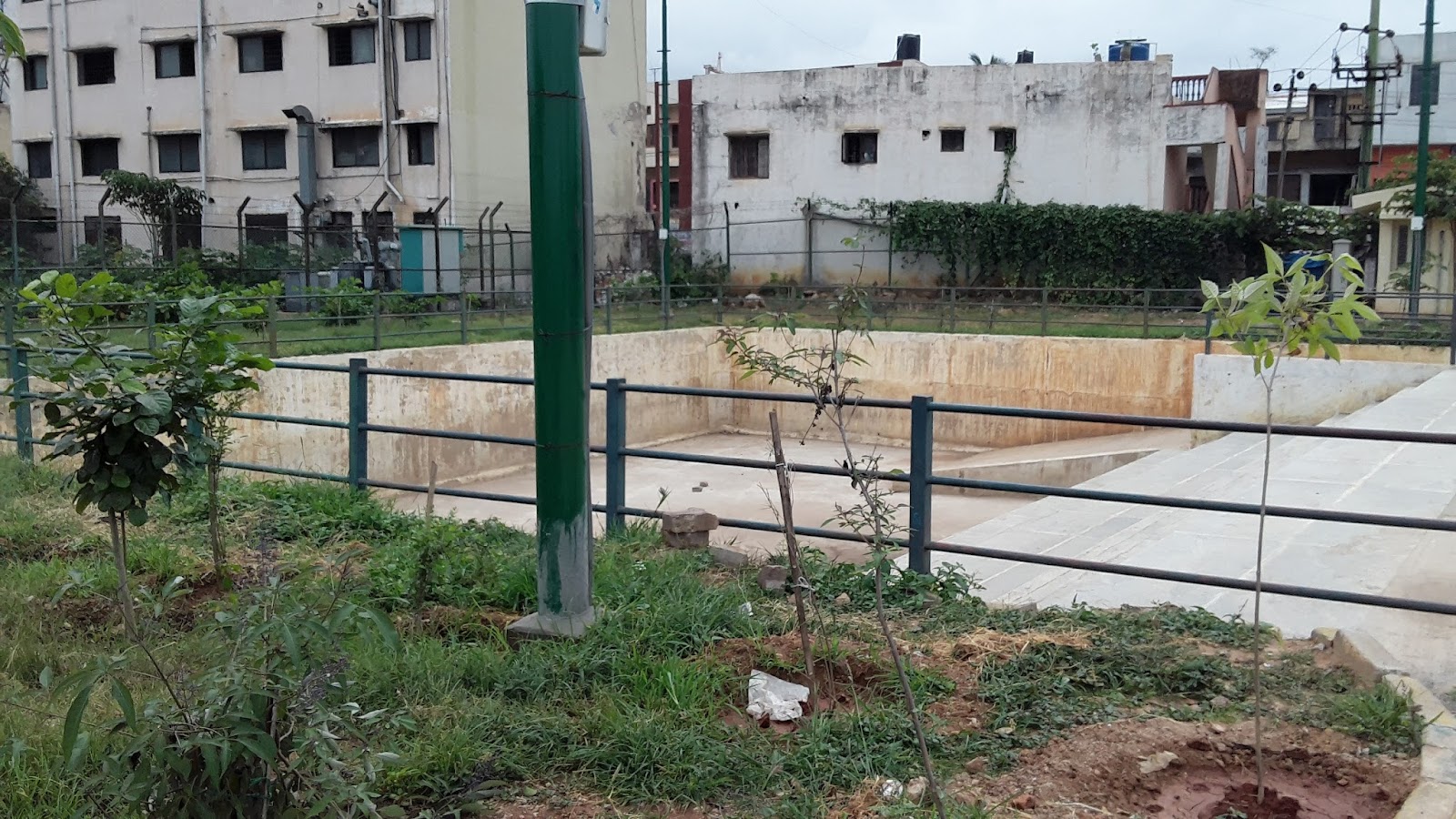 There is also a small building for maintenance workers. The restroom facilities are supplied with Kaveri water for flushing and handwashing. There is a fence around the entire premises and a smaller fence between the paved walking path and the lake.


This lake may also provide livelihoods for contracted fishermen and local residents. Within the lake, there are ropes that hang fish food in the water. Additionally, residents may cut and take home grass as fodder for cows.


The Lake
We identified six distinct inlets where water would enter Dasarahalli Lake.

As stated above, each inlet structures will allow untreated storm/sewage water to flow into the lake during large rain events.


The only outflow from the lake is an overflow system under a bridge in the NW corner of the lake. 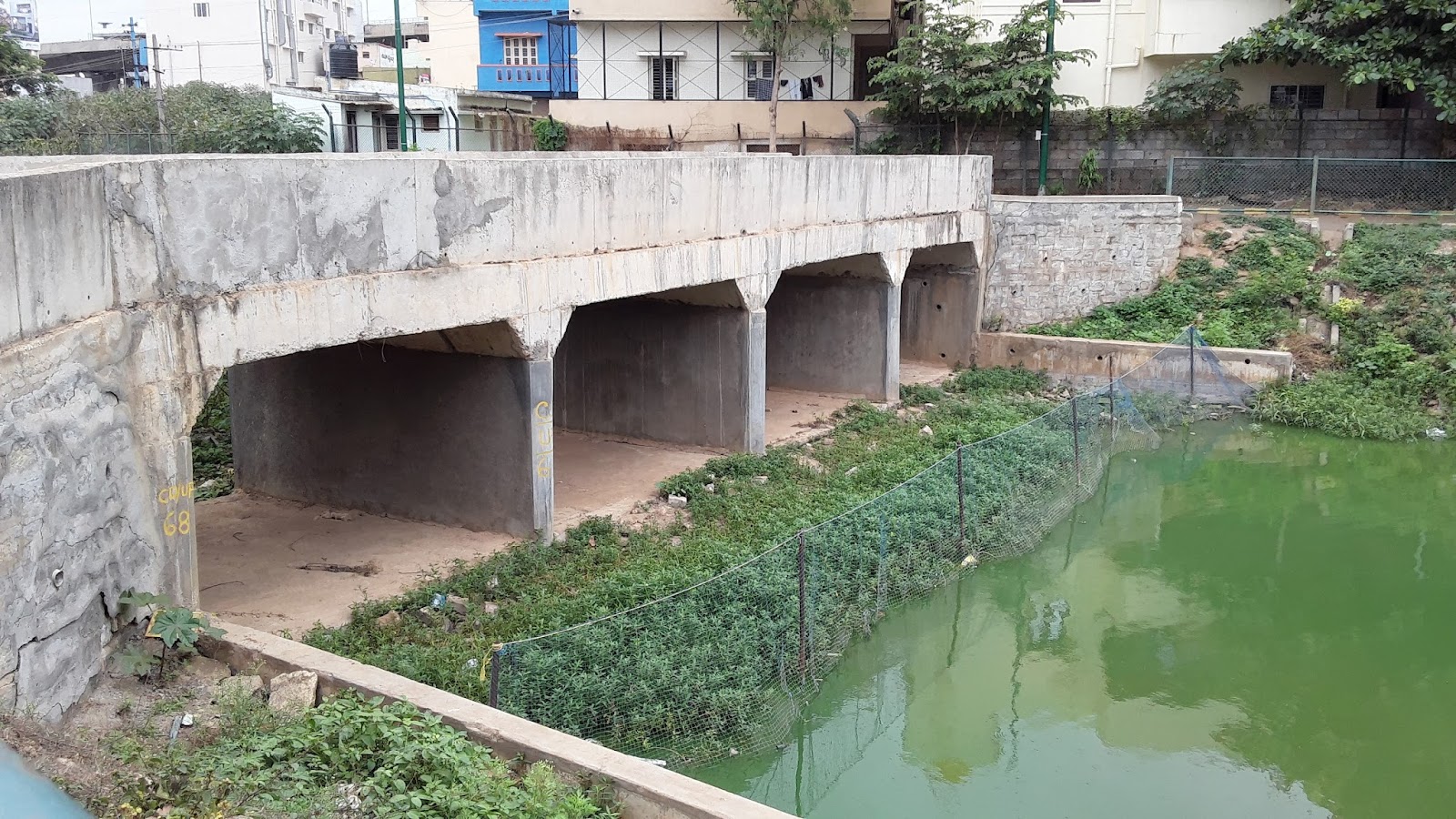 There was a clear build-up of algae around the lake. The plant growth around the lake is maintained by individuals who trim the grasses and perform other landscaping tasks.


According to an article in IBT, industrial effluents from the Peenya Industrial Area also discharges into the lake, likely through one of the two naalas. The Karnataka State Pollution Control Board had determined that the dissolved oxygen (DO) level in the lake had been reduced to 0.3 mg/L.1 Dissolved oxygen levels below 5.0 mg/L will put aquatic life under stress. DO levels that remain below 1-2 mg/L for several hours can result in large fish kills.2 At this time, we do not know exactly the number of samples taken nor where (within the lake or in the area within the bund) or when. We are also unsure of how long the low DO levels persisted and what impact that may have had on the lake.


The STP
The STP at Dasarahalli is owned by the BBMP and was constructed in 2013. The STP is capable of treating 1 MLD of sewage. The sewage enters the plant from the sewage drain from Naala 2 and then the treated water is piped to the into the lake. If the volume of the wastewater entering the sewer line connected to the STP is more than 1 MLD, the wastewater beyond 1 MLD gets diverted into a separate sewer line and flows into the next lake. The STP operator told us that the discharge is regularly tested to assess its quality.


It is an activated sludge treatment plant with aeration, secondary, and tertiary treatment processes. The filters are backwashed for a minimum of 10 minutes each day - the backwash is recycled to a previous step in the treatment process. Regular maintenance of the entire facility is performed annually. 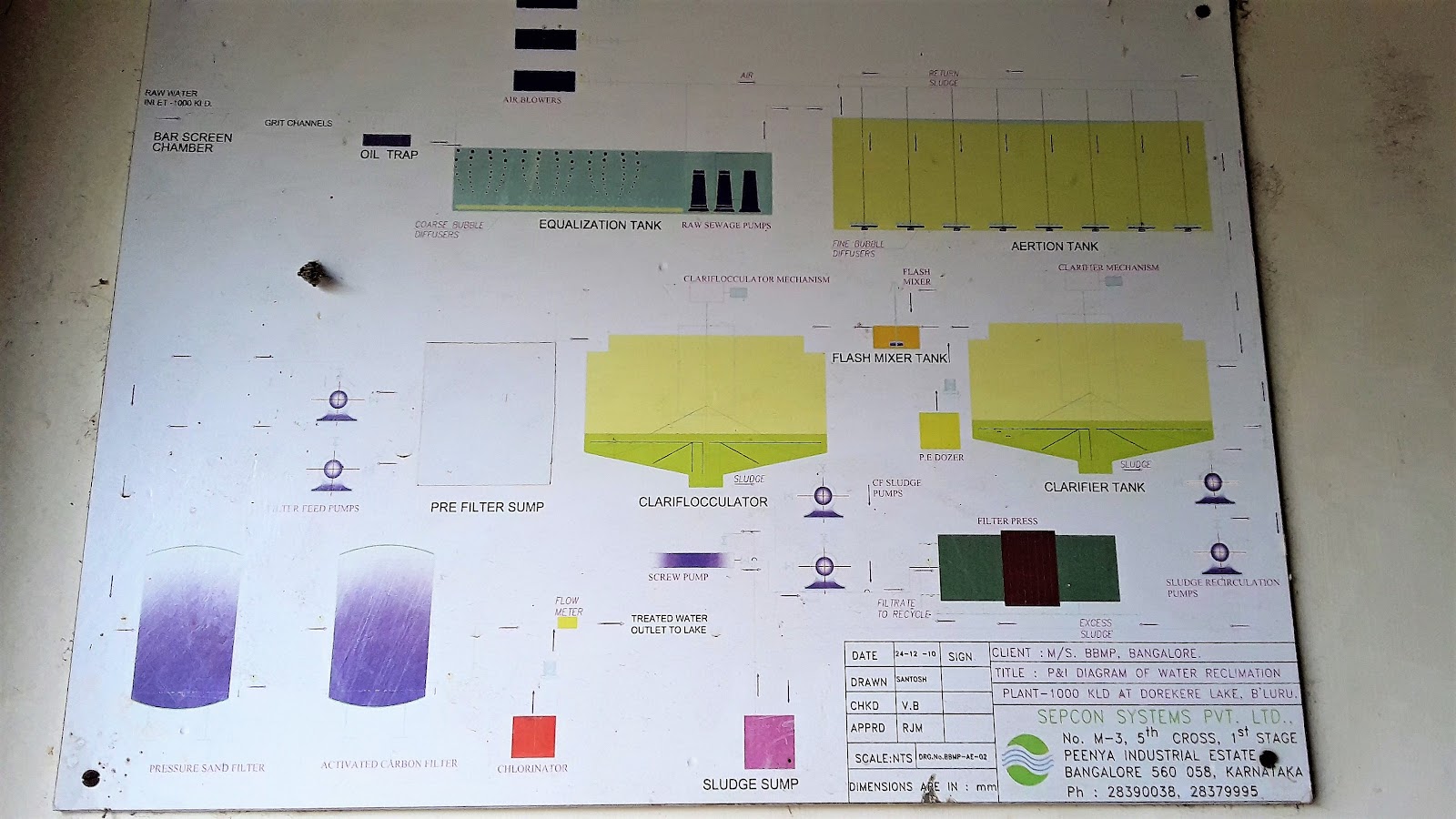 There is no wetland in Dasarahalli Lake. Instead, there is a small area on the eastern side of the lake which is separated from the main waterbody by a rock bund. 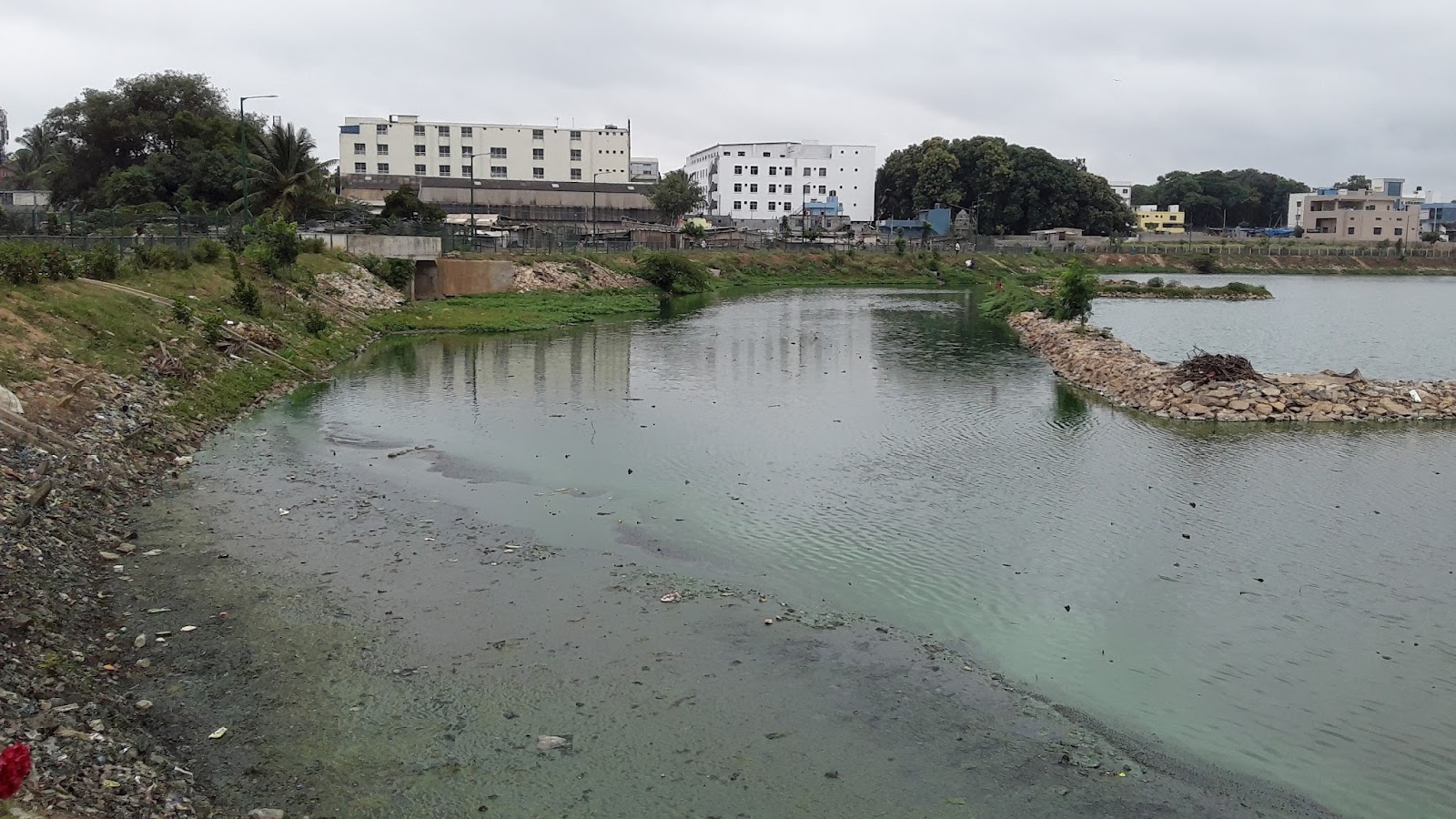 This area is intended to hold any trash and sewage that may get washed into the lake due to heavy rains which can then be easily gathered and removed from the lake. This pollution may come from any of the two naalas or three storm drains that discharge into the lake. It should also be noted that the storm drains may also contain sewage from the nearby slum community. This trash is then placed in a fenced area to dry before being collected and removed from the premises.