Water Management at Rainbow Drive: In the Buildotech magazine

An article authored by BIOME describing water management at Rainbow Drive  has been published in the Buildotech magazine. Buildotech is India's premier magazine on building technology, design and sustainability. The readership of the magazine comprises architects, builders, facility management companies, project consultants, system integrator and system providers.
The softcopy of the article is here

Also available on
Buildotech website http://buildotechindia.com/integrated-urban-water-management/
and Digital Edition http://emag.buildotechindia.com/index.aspx?issue=01-may-2016&page=63
Many thanks to the RBD association
Posted by Biome Trust at 10:21 AM 1 comment: Links to this post

Geomembranes : Conversations with Mr Joshi on 11th May 2016

Mr Joshi along with Lakshmikanth were installing the geomembrane at a farm pond off Kodathi Gate, Sarjapura Road at Mr Ashok's farm camp. They were doing this work  undertaken by TEXEL industries (Sailesh R Mehta. MD  Texel Industries  ..9825329050)


Documented below are some details from the conversation. The membrane is made up of 7 layers of HDPE + LDPE yarns + water proof medium. The company has been around for over 30 years now. The sheets are available in 2m * 100m lengths. These are then welded together into 6m x 40m or 6m x 60m pieces that are then installed. They are jointed with a heat blower at 350-400C. Thickness of 0.25mm to 1.25mm. The joining is a critical part of the installation and has to be done by a skilled technician

The company has done over 2000 ponds in the last couple of years. A team of 2 normally handle the installation on site. Most have been in Maharashtra and Gujarat so far. The company is Headquartered  in Bombay

The costs work out to 150/- to 200/- per sqm – including installation, transportation and all other incidentals. The company is also part of the BIS standards committee for geomembranes. The material has done well even in exposed condition when not holding water. The oldest ponds are 10-12 years old. The membrane can also be repaired in case tears develop. No surface preparation is required. The surface has to be kept as smooth as possible and without any sharp objects. Gentle slopes are preferred

The largest implementation is 7Cr liters. Average sizes are 50L to 1Cr liters
No specific innovations have been made for reducing evaporation

A video to demonstrate the welding process

Posted by Biome Trust at 9:44 AM No comments: Links to this post 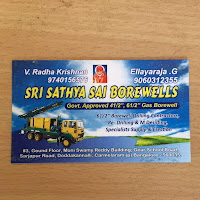 Mr Ilayaraja, borewell  contractor in Doddakannelli. Owns his own rig. From Tiruchangodu, Tamilnadu

We had good rainfall (1000mm plus on an average) in 2015. Yet, this summer was harsh for everyone. Would it have helped if we had harvested rainwater? The primary analysis from the project area (Yamalur watershed) observes that there is enough water available for everyone if we do rainwater harvesting leaving excess water to go to the lakes and/or groundwater recharge.

A watershed is the area of land where all of the water that falls in it and drains off of it goes to a common outlet. Biome Trust has been involved in an action research project called Particpatory Groundwater Mapping in a Yamalur watershed of an area 33.81 sq.km.

Rainfall data is very critical for it gives an idea of water falling in an area (inflow), how much is percolating, evaporation percentage, etc. The rainfall related data collection involved contacting Karnataka State Natural Disaster Monitoring Center (KSNDMC). KSNDMC has installed raingauges in 89 BBMP wards so far and almost all village panchayats have these raingauges. We managed to get 2015 rainfall data (daily and monthly) from KSNDMC except Mangmanapalya (where there is no raingauge and so have used closest ward Bommanahalli for the analysis) and villages Rayasandra, Choodasandra, Kodathi. We’ll keep collecting this information. However, some primary analysis throws some interesting results:

Based on this data, we want to understand some more details:
·         Runoff available- Based on the land use understanding this information would be easy to obtain
·         Recharge- how much of the runoff can be used for recharge, how many wells would be essential
·         Recharge and borewell yields- to determine the efficiency of shallow groundwater recharge and correlation with borewell yields (if any). So we are collecting Static water level (SWL) data from many borewells in the watershed. We use manual and automatic sensors to facilitate the data collection
·         Spatial distribution of rainfall- Bangalore rainfall is varying at the spatial scale so understanding which areas are the high rainfall/low rainfall would help
·         Microwatershed level rainfall analysis. This yamalur watershed consists of 8 micro-watersheds

We are still learning to analyze this data and would like to hear from you on how best to put this data to use. We would also like to use better visualization. This is what the Participatory Groundwater mapping action research project is attempting to do.
Posted by Biome Trust at 2:41 AM 1 comment: Links to this post