Authored by Shreyas Sati and Alana Helin as part of the BIOME Trust Wetlands & Lakes Project
Summary
Puttenahalli Lake is on 13 acres, 25 guntas and is located in the south of Bangalore between Brigade Millenium and L&T South City near Millennium Avenue. It is frequented by many local residents who enjoy the provided 1.1 km walking path, horizontal and parallel bars for exercise, gazebo, and other amenities. There are three entry points into the lake premises, one at the northwest and two at the southeast corner. The entire eastern side of the lake is bordered by slum dwellings and is open to nearby roads. There is no STP within the lake premises. However, there is a large area of the lake which is occupied by constructed wetlands, some attached to the lake bed/bund around the lake and some floating. In total, there are 7 inlet points and 1 outlet from the lake. Of those, two are STP treated water from L&T South City apartment complex and five are storm water inlets that flow from neighbouring areas into the lake through culverts. Around the periphery of the lake, there are about 200 trees planted which teems with fish and other fauna. 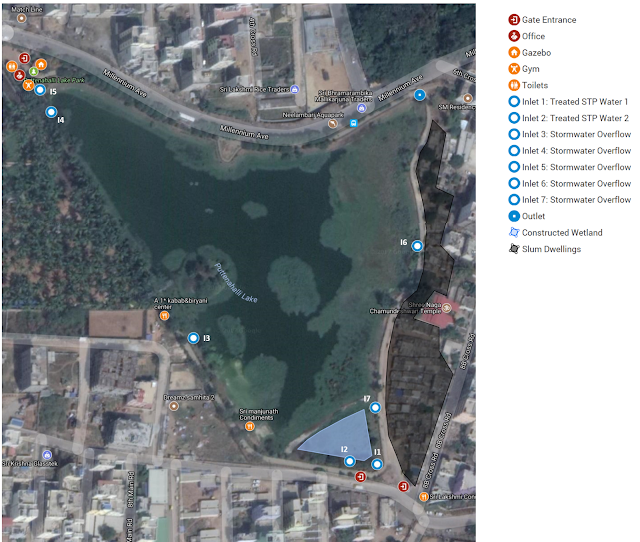 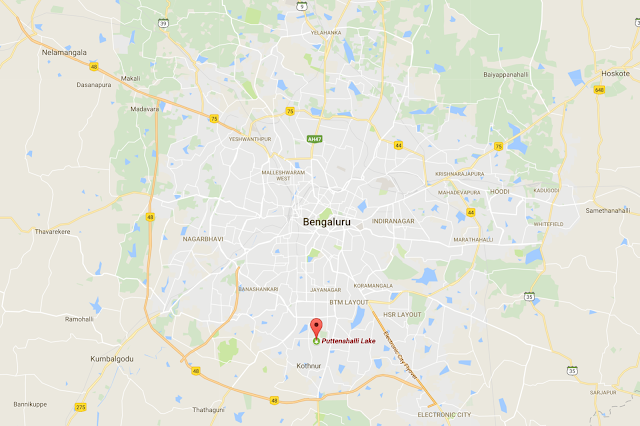 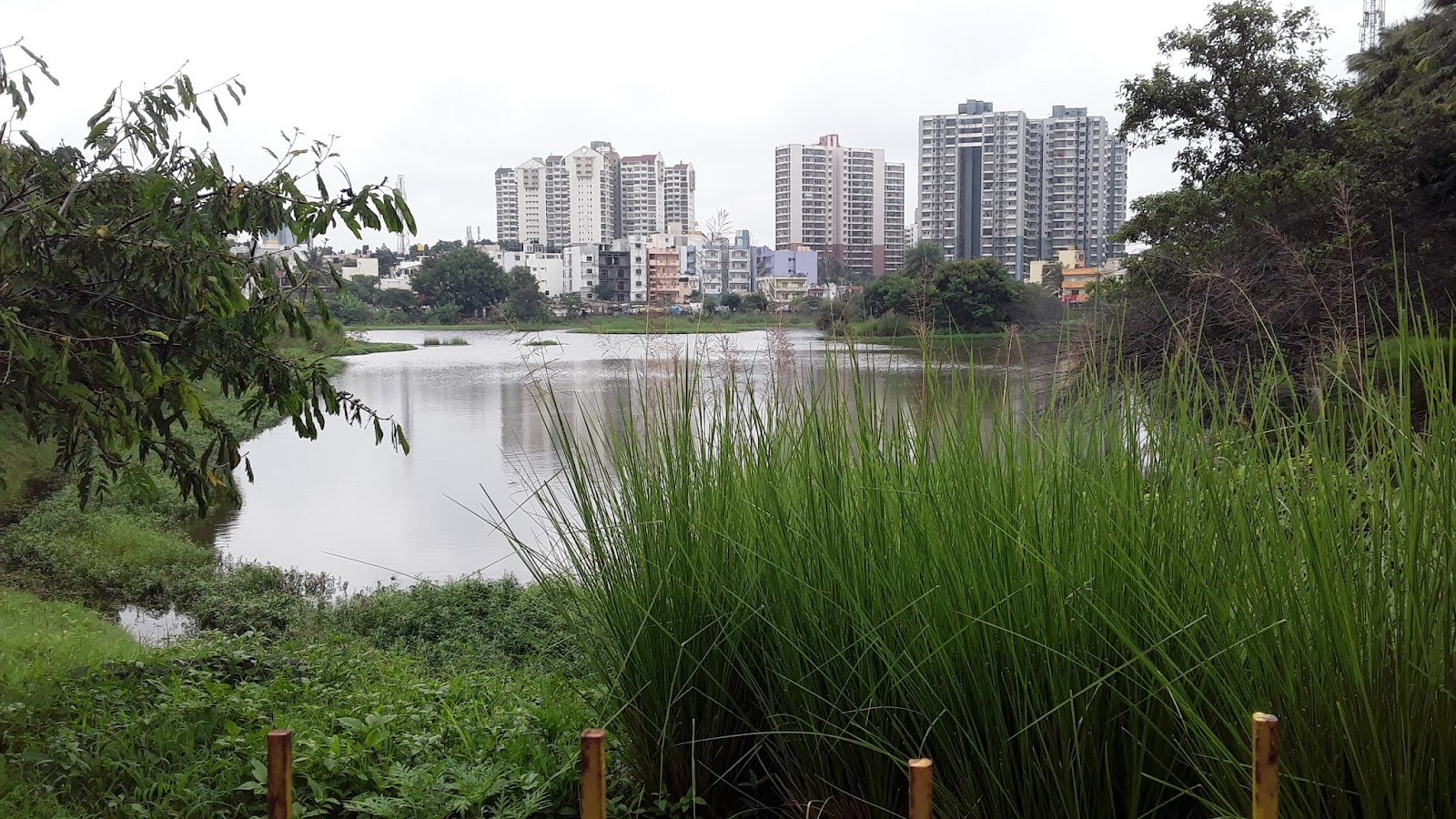 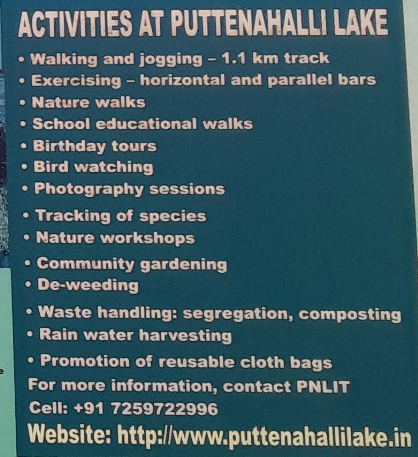 The Lake
Seven inlets where water would enter Puttenahalli Lake were identified and are summarized below. All of the inlets except 6 & 7 discharge into silt traps prior to entering the lake or wetlands. In addition, the two STP treated water inlets are filtered through a small grate to capture large debris before it enters the lake (photos below - Inlets 1 & 2).


The outlet from the lake is an overflow system under a bridge in the NE corner of the lake. 
The Wetlands
There are multiple wetlands in Puttenahalli Lake, including constructed wetlands which are floating and/or attached.


Near the entrance in the northwest and the small rest area, there were several floating wetlands. 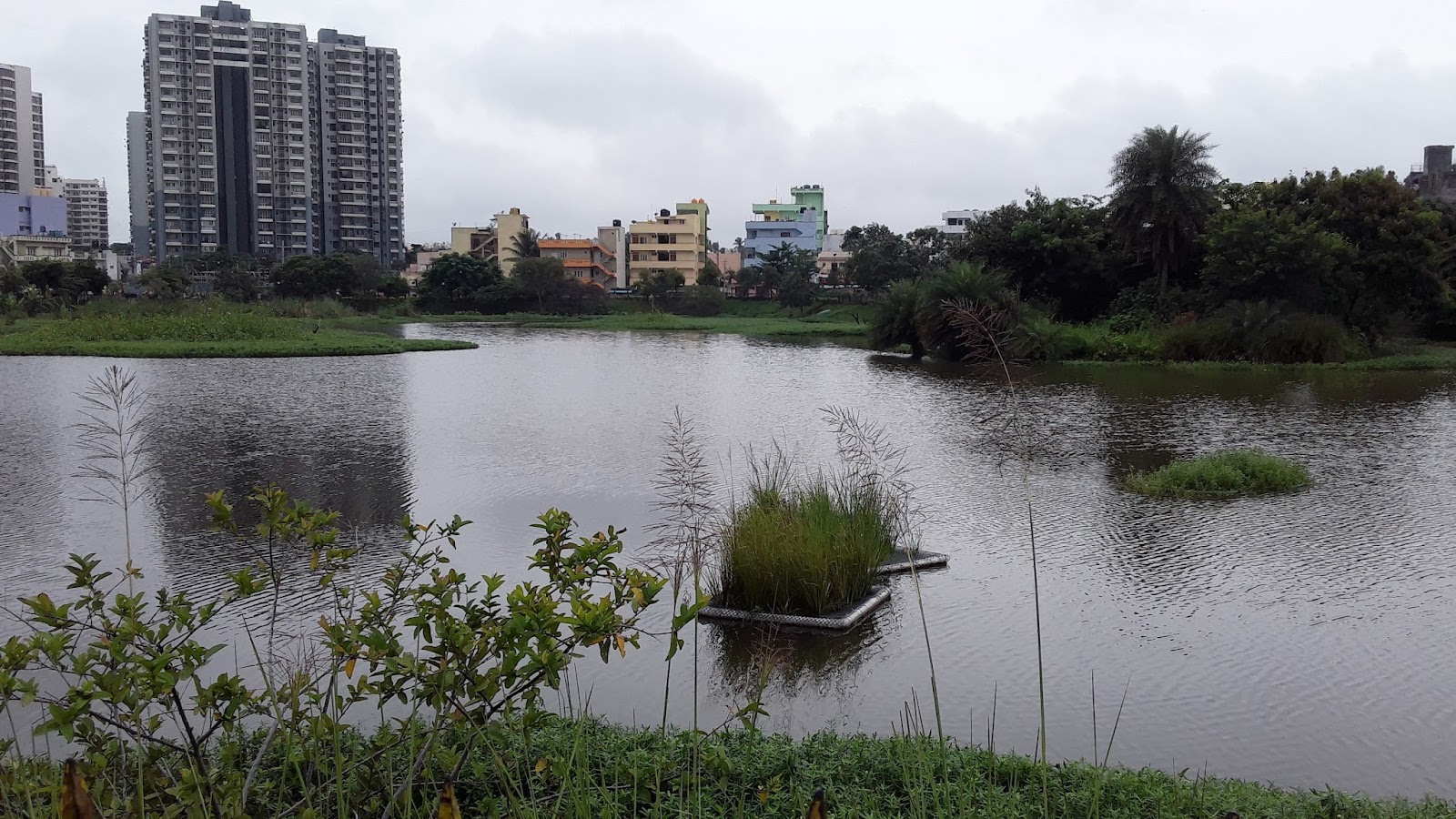 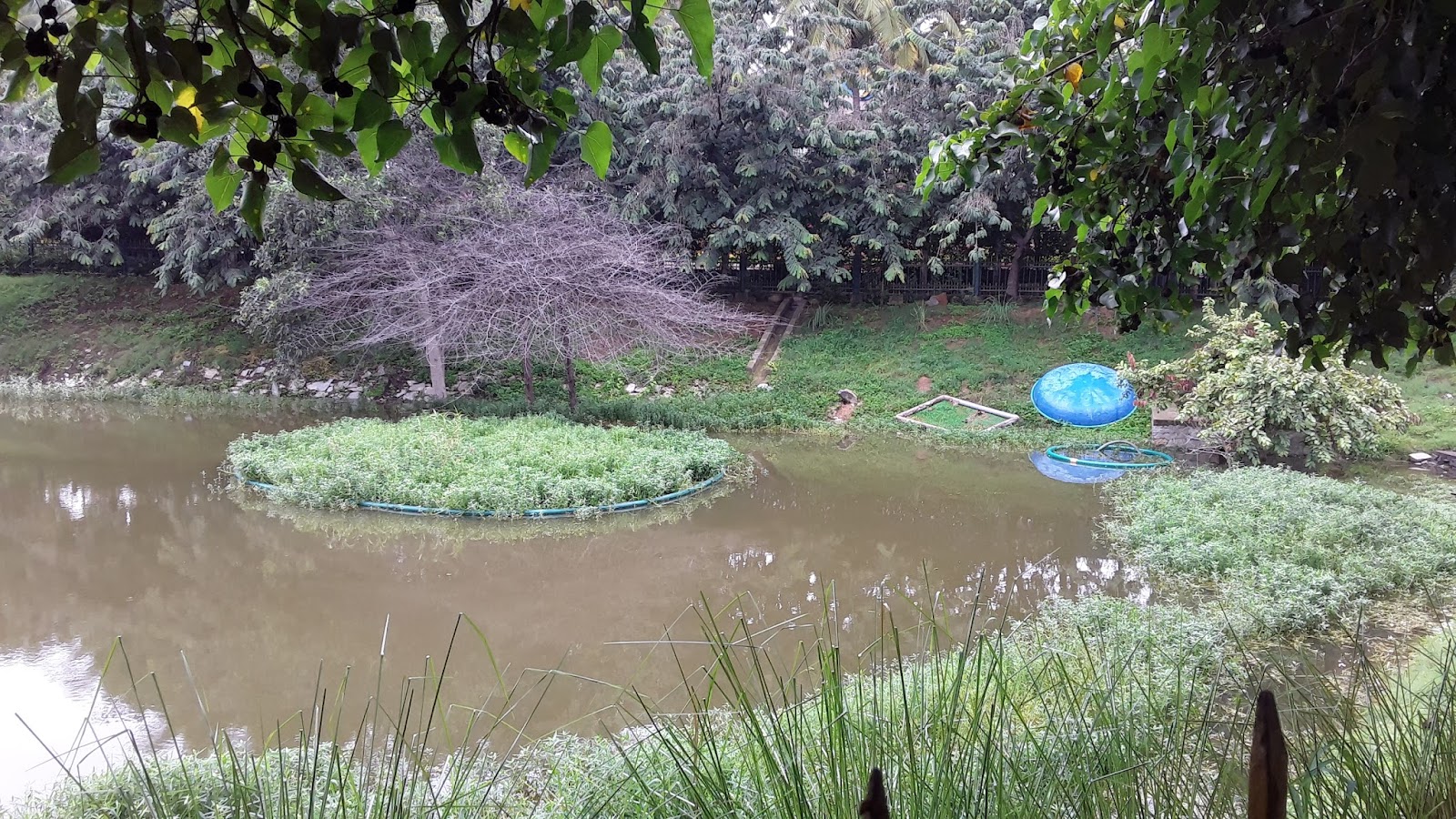 Floating wetlands were found throughout the lake


In the southeast corner of the lake, the treated STP water from South City passes through wetlands which consist of floating and attached plants. 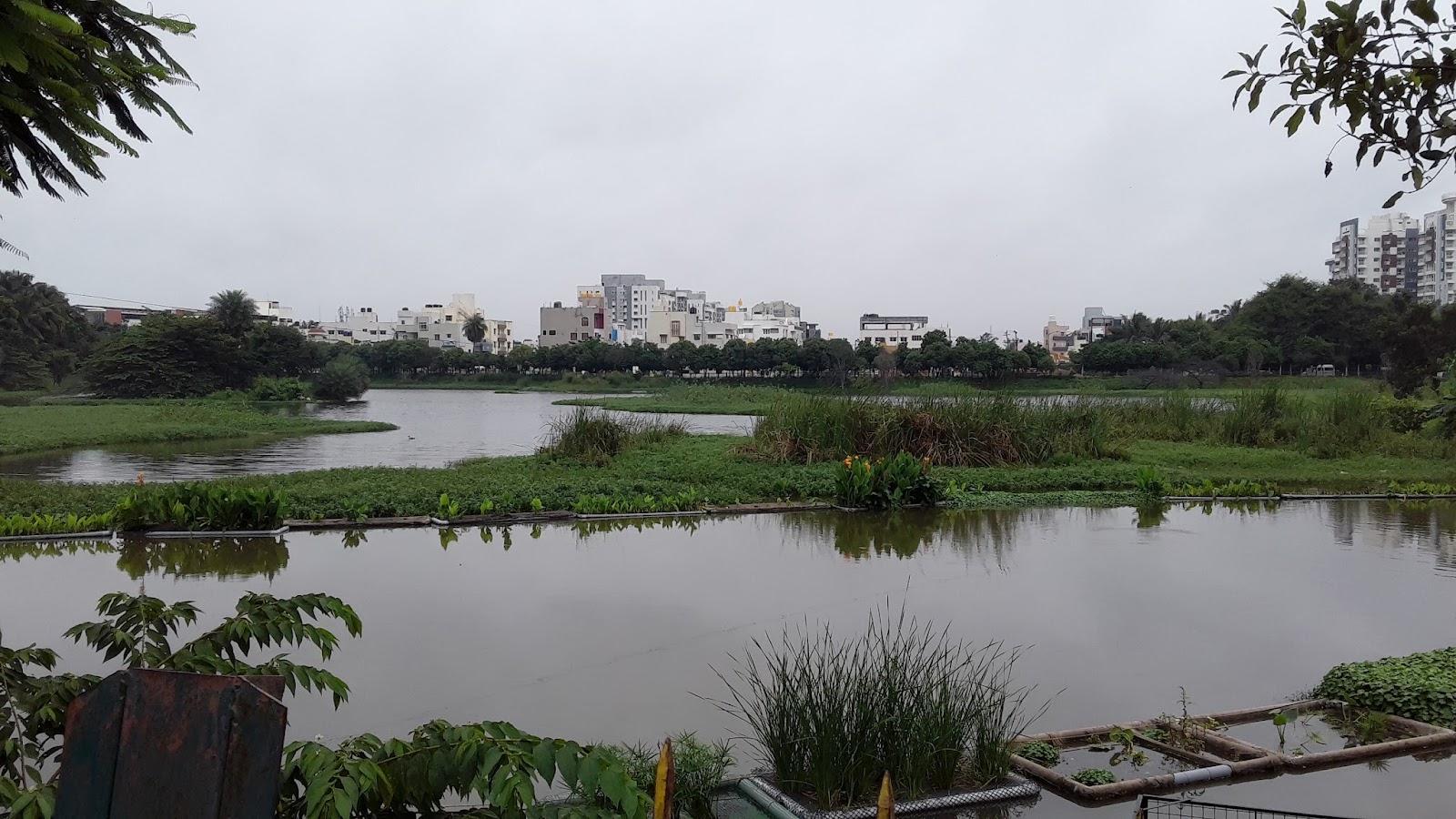 
There is also a wetland prior to the outlet which further filters water before it leaves the lake. 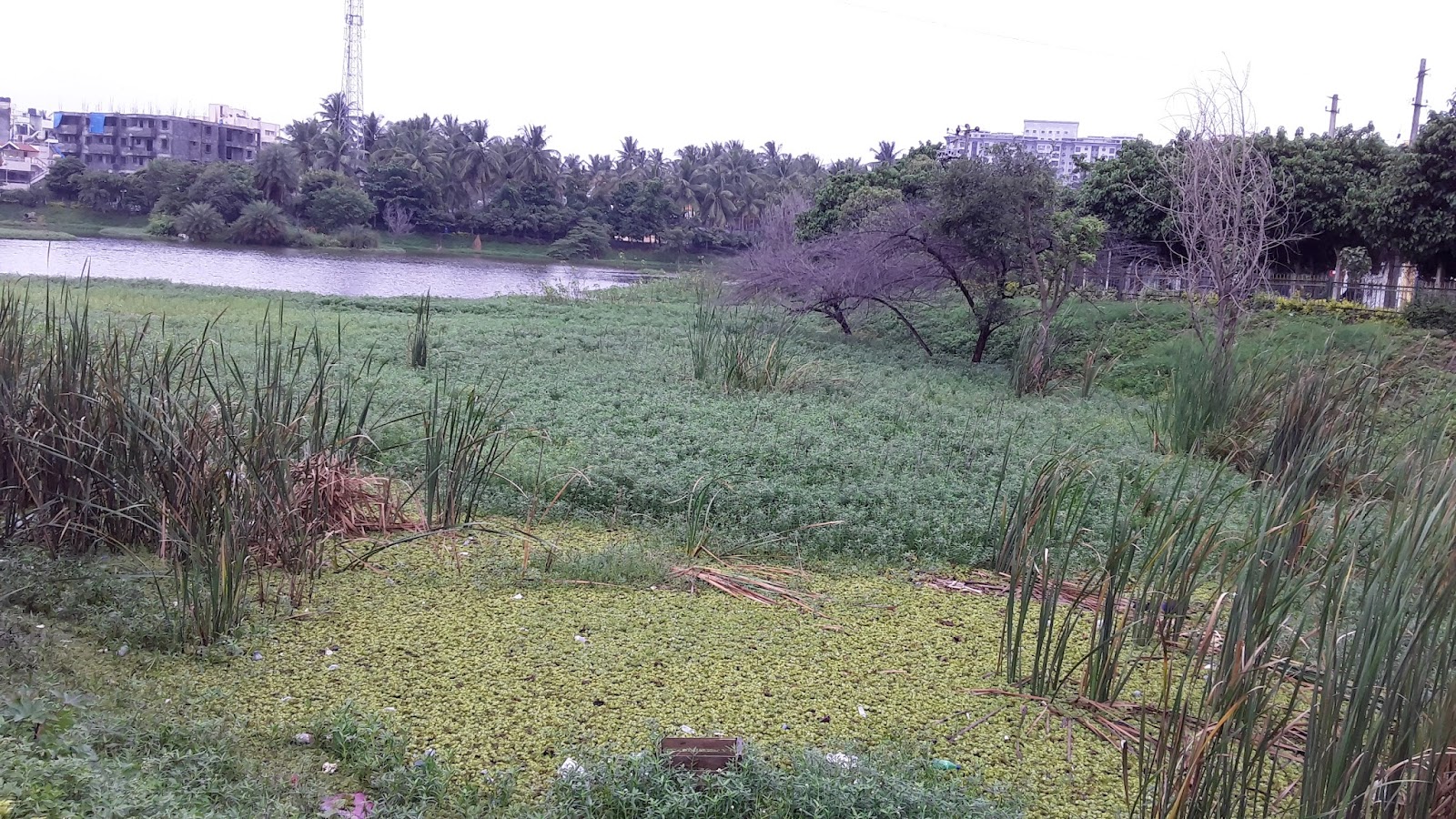 The lake water flows through the wetland and discharges through the outlet which is to the right of the picture above.