Authored by Shreyas Sati and Alana Helin as part of the BIOME Trust Wetlands & Lakes Project
Summary
Agara Lake is on 90 acres and is located in the southeast part of Bangalore near Sri Jagannath Temple in Agara Village. Of the total 90 acres, the main lake area is 61 acres. It is frequented by some local residents who enjoy the provided walking path. At present there is no STP. However, there is a 8.5-acre space in the southern part of the lake allotted for a constructed wetland. The wetland has 5 parallel bunds which stops the direct inflow of wastewater into the main part of the lake. In total, there are 17 inlet points and 1 outlet from the lake. Of those inlets, 14 inlets are from a stormwater drain along Sarjapur Road and one inlet is from the kalyani near the proposed children’s play area, both of which enter the main lake directly. The remaining two inlets enter the wetland; one large naala in the south directly enters the wetland and one storm drain enters from the east into a silt trap prior to entering the wetland. The outlet of the lake is an overflow weir under a bridge in the western corner of the lake. N: Naala, I: Inlet. Map labels match up with corresponding legend element. Top of map is north. 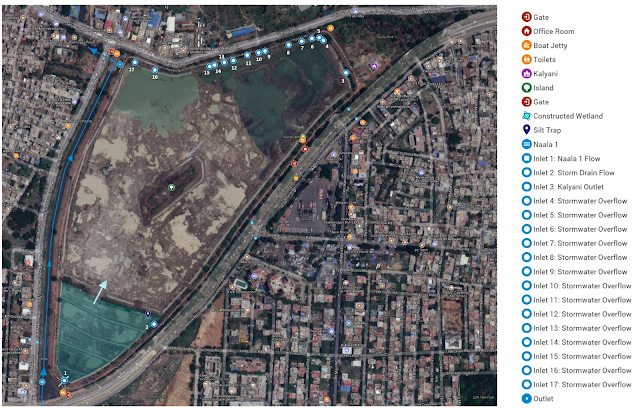 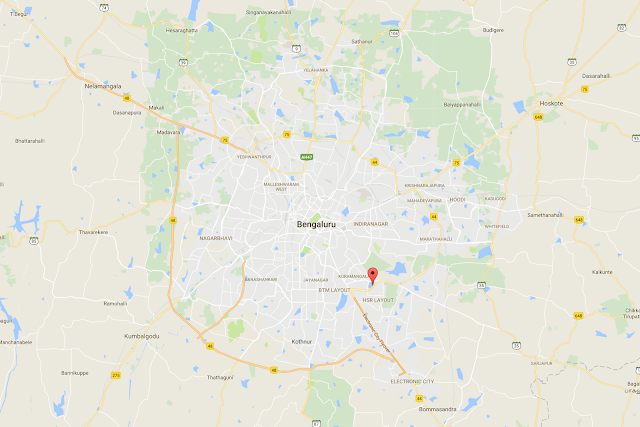 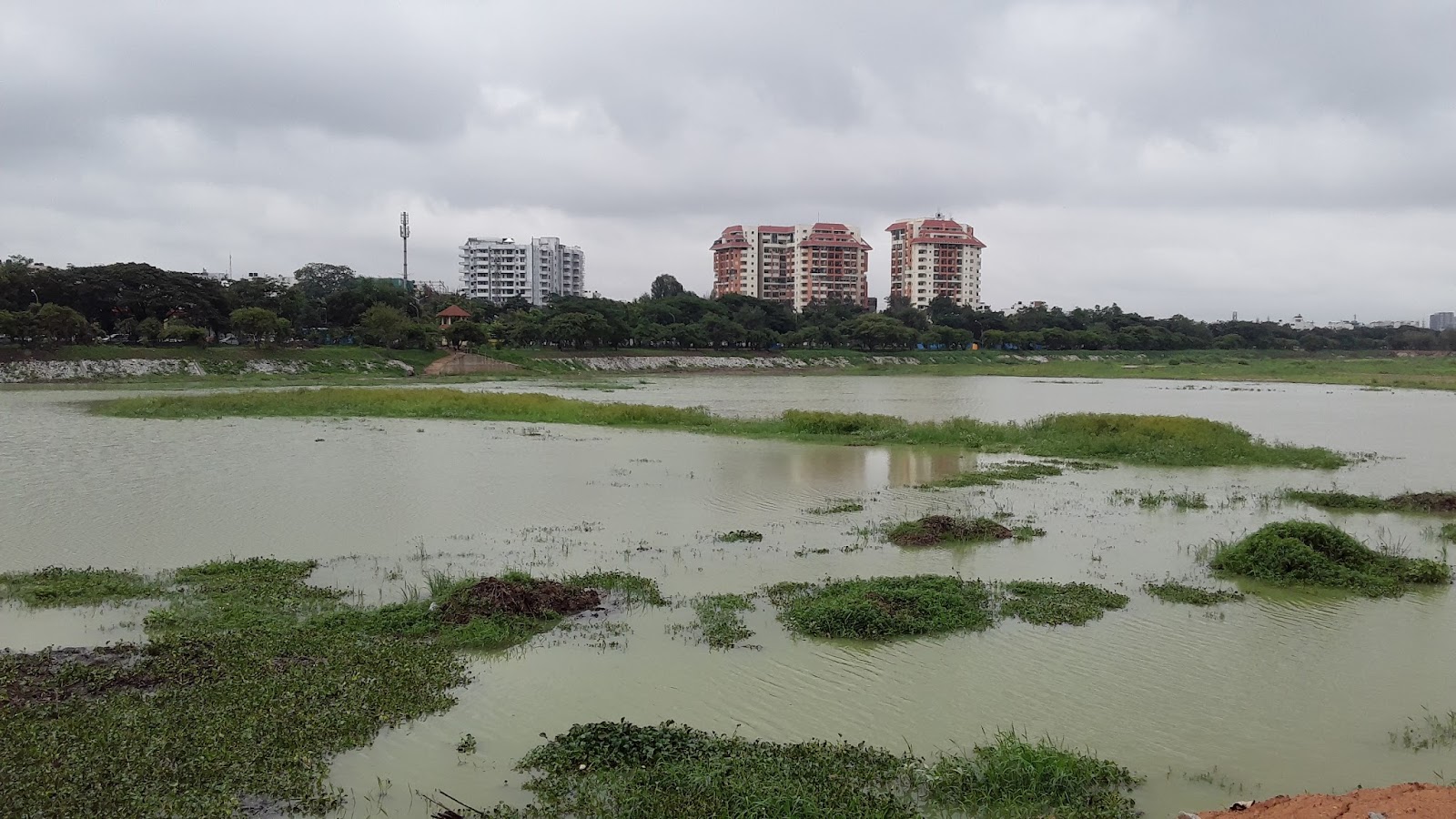 Karnataka Lake Conservation and Development Authority, some private players like Souharda Infratech Pvt Ltd, Alcon Consulting Engineers (India) Pvt Ltd and the local community are working towards restoring the lake and have spent about Rs. 6.25 Crores in Phase 1 of the project. It is estimated that the total cost of the project will be about 16 Crores. The proposed plan of lake restoration is as shown in the picture below. 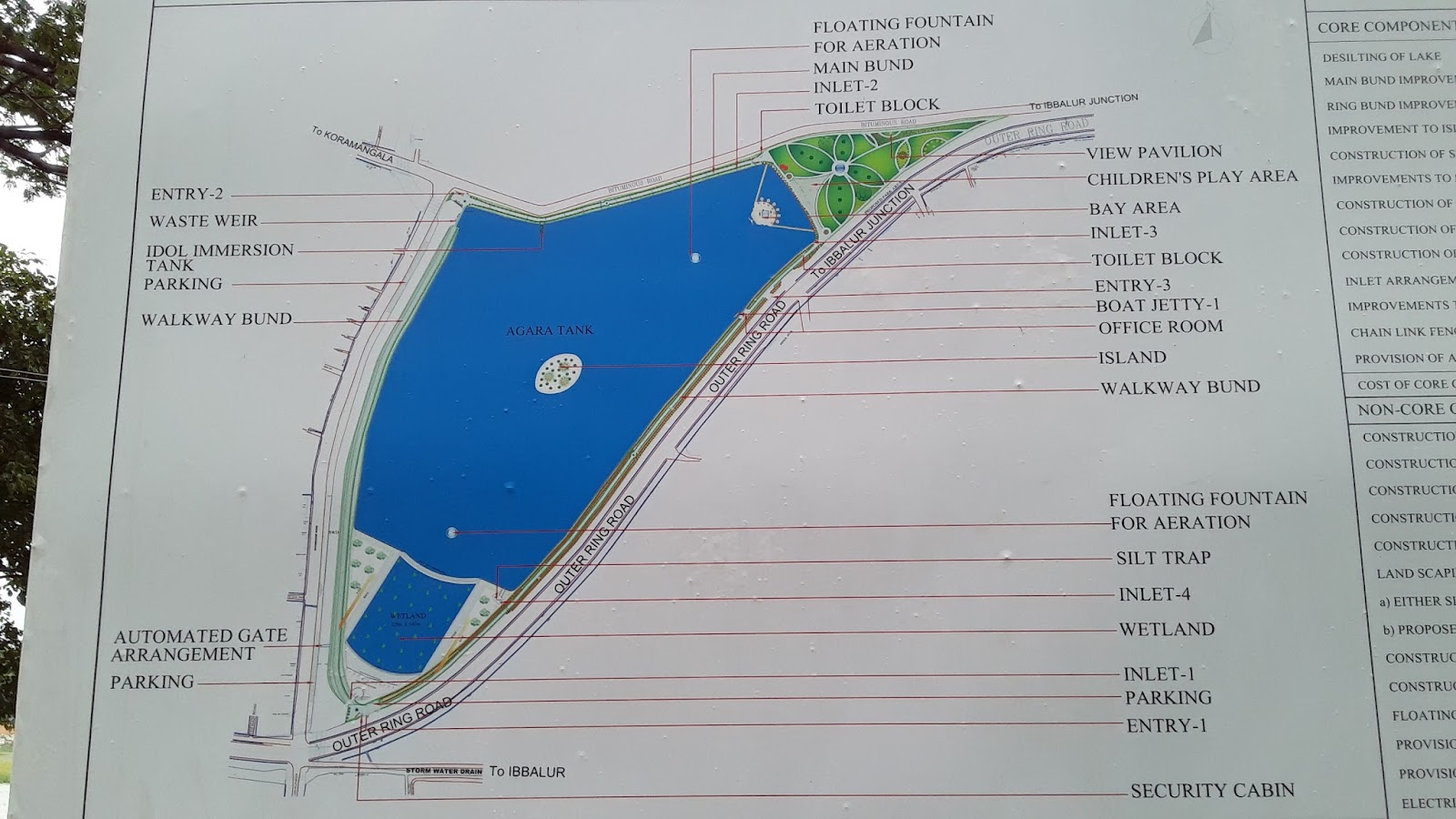 However, we observed that the work is still in progress and much of it is yet to be completed. Also, there are minor deviations in implementation from the proposed plan in terms of location of the inlets and amenities.


There are 17 inlet points, fifteen of which discharge into the lake directly and two enter the lake through the wetlands. It was reported by a resident that a sewer line runs under the walking track which is adjacent to the 14th Main road and the large naala (Naala 1), which flows into Bellandur Kere. 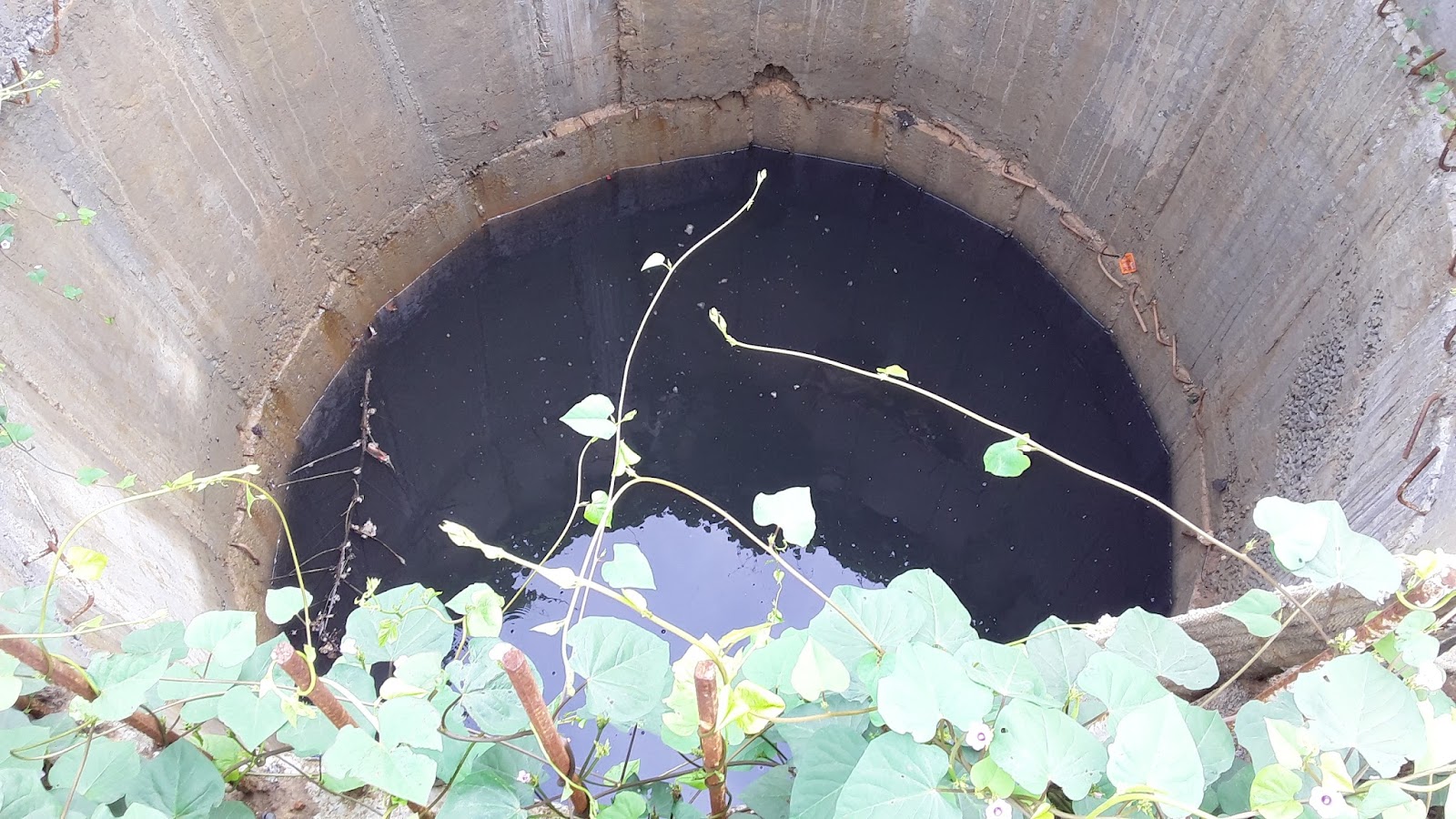 In the mornings and evenings, few local residents use the 2 km path around the lake for walking, jogging, or other workouts. Currently, there are multiple benches around the lake and a boat jetty. It appeared that three toilet facilities and a kalyani were under construction at the time of our visit. 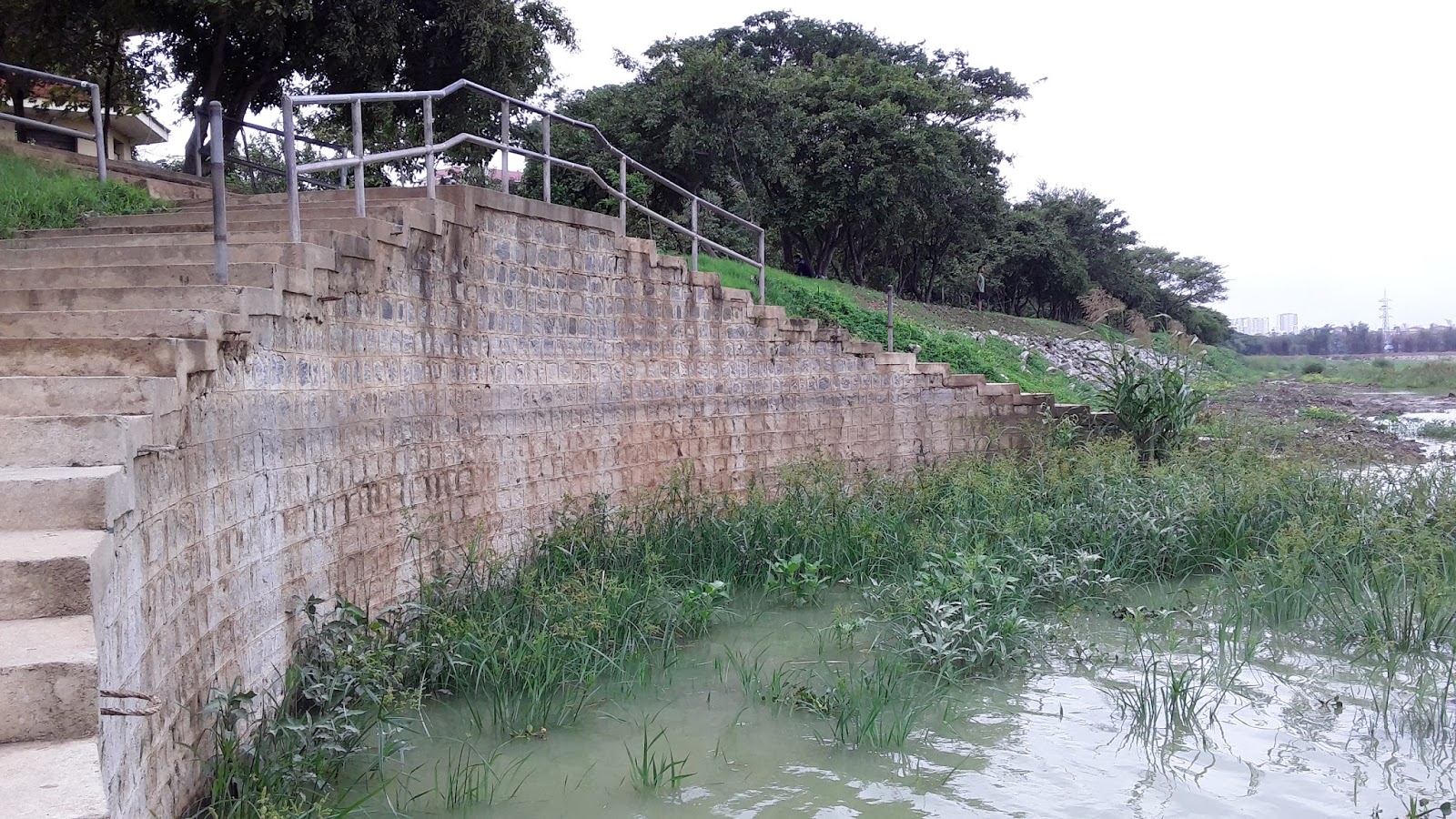 We also observed several semi-permanent housing structures and tents along the southeastern portion of the walking path.


The Lake
Seventeen inlets where water would enter Agara Lake were identified and are summarized below.


The outlet from the lake is an overflow weir under a bridge in the western corner of the lake. The water which overflows would enter Naala 1 and be directed to Bellandur Lake. 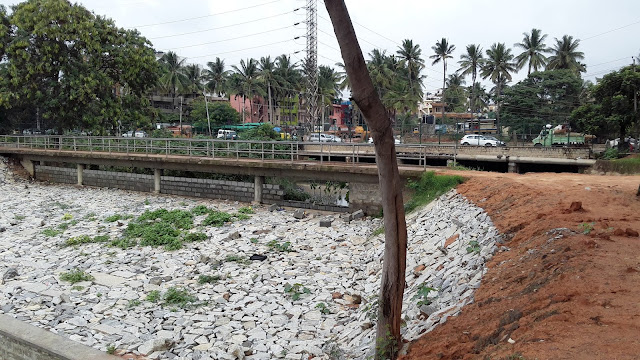 
The STP
There is no STP at Agara Lake. However, we were told by some people who live there that there is a proposal to commission a 35 MLD STP at a cost of 65 crore1, the details of which is not known. According to an April article in The New Indian Express, the STP will take two years to complete after the tender is awarded1. We were also told that the sewage flowing in the large Naala 1 would be diverted through an underground drainage pipe to Bellandur lake which would reduce the sewage flow in the naala by about 60-70%. 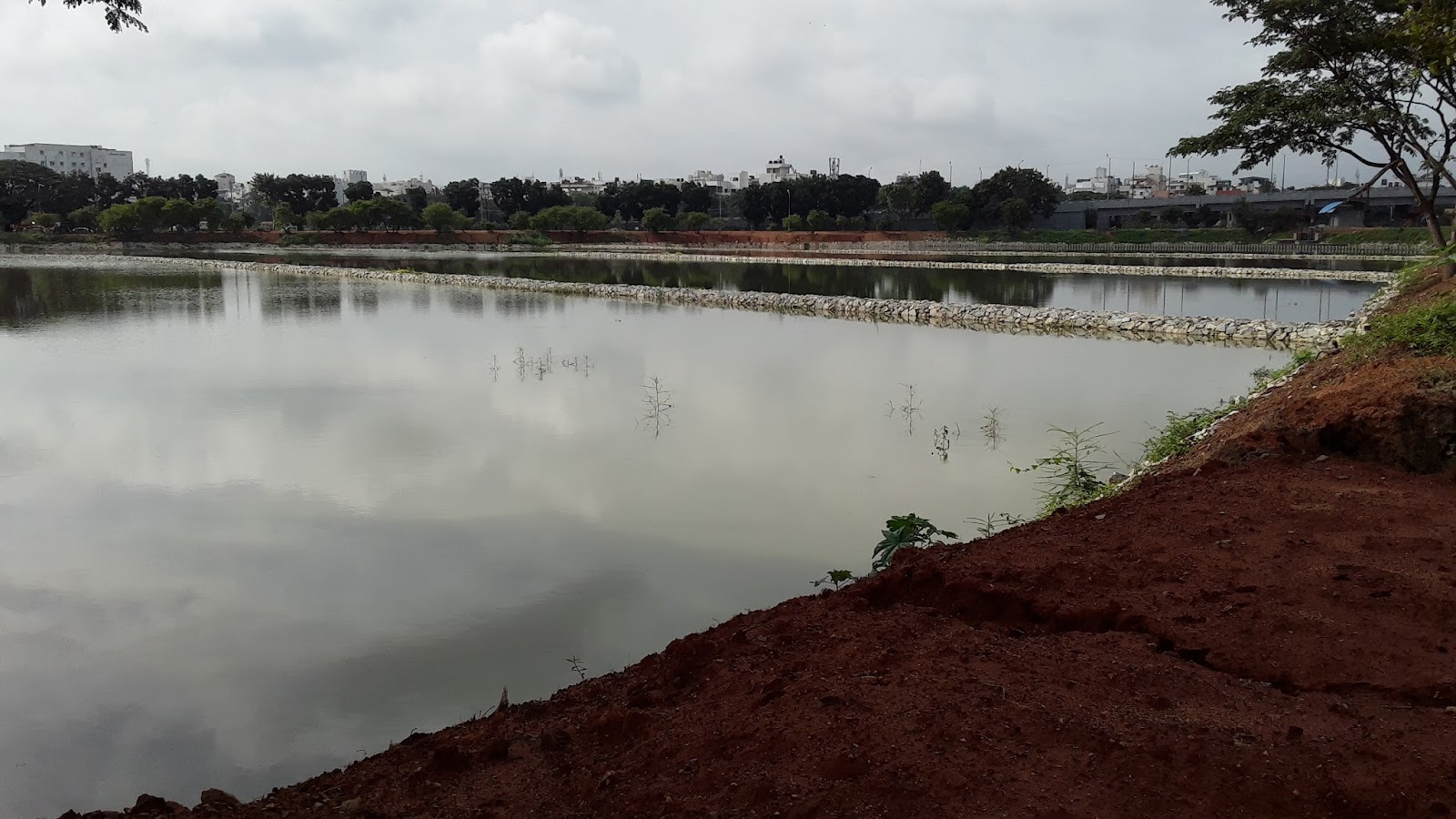 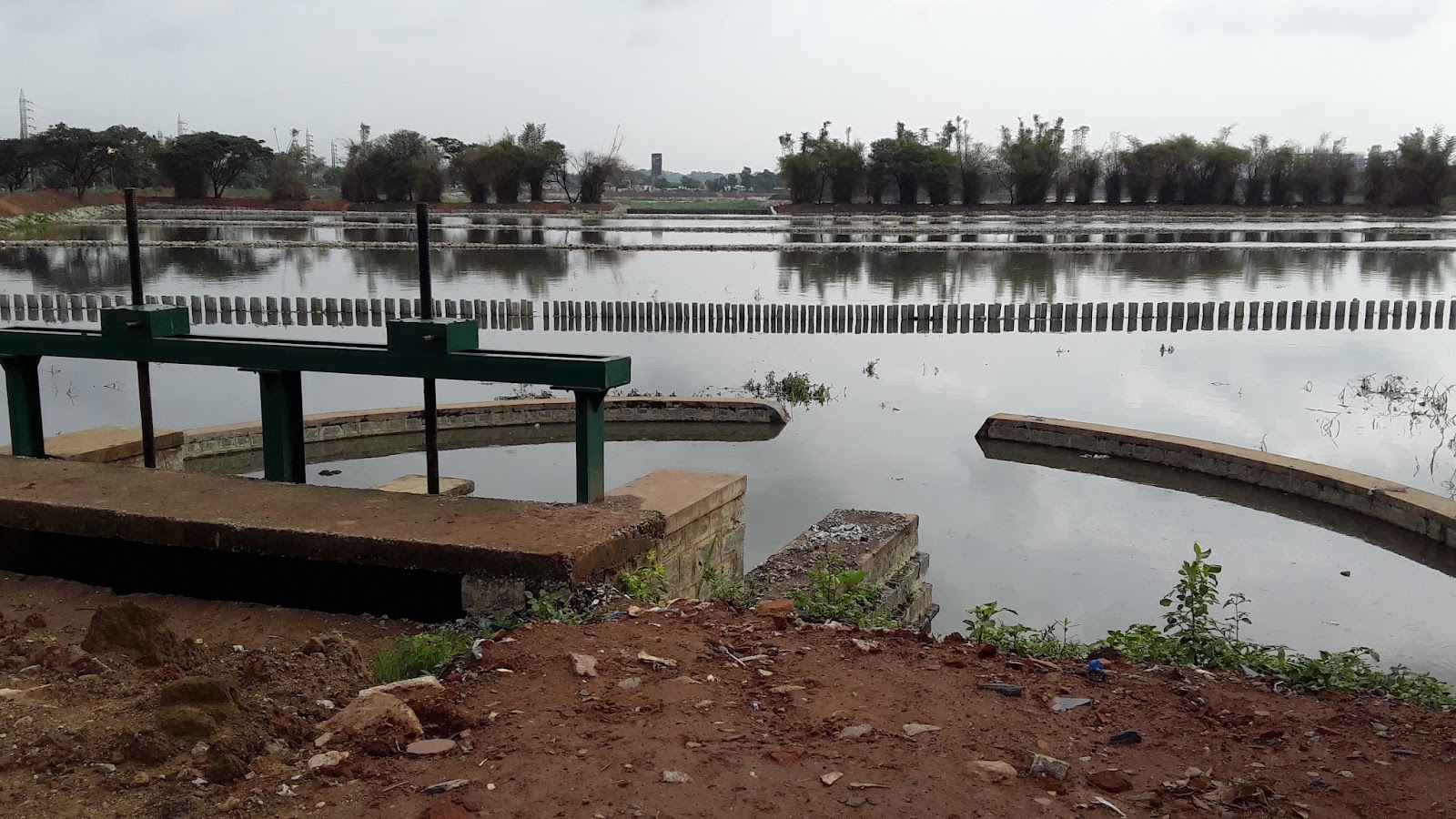 
Open Questions
Posted by Biome Trust at 2:00 AM

thanks for sharing such a nice blog.