Bangalore city is plagued with various water problems. And with the continuous demographic growth the groundwater exploitation has reached its limit largely through borewell extraction. However, little has been known about the actual picture of groundwater levels, hydrogeology and quality of this groundwater. Therefore, this study was conducted to assess the current situation on both these parameters in Bangalore bu Department of Mines and Geology.

The study is an analysis of over 3000 groundwater samples collected over an area of 800 sq. km. in and around Bangalore city.  The study focused on urban groundwater hydrology, groundwater quality and quality of Lake Water.

Assessing groundwater levels becomes essential when water is the biggest concern. But, many of the wells including those set up by the department to monitor groundwater level fluctuation dried up. In the span of one year (February 2009-January 2010) 14, 483 borewells were drilled.

Hence, need was felt to increase the wells. Based on geo-hydrological features of the area, 18 sites were identified for construction of Piezometers in BBMP area.  However, due to field constraints only 12 sites were confirmed. 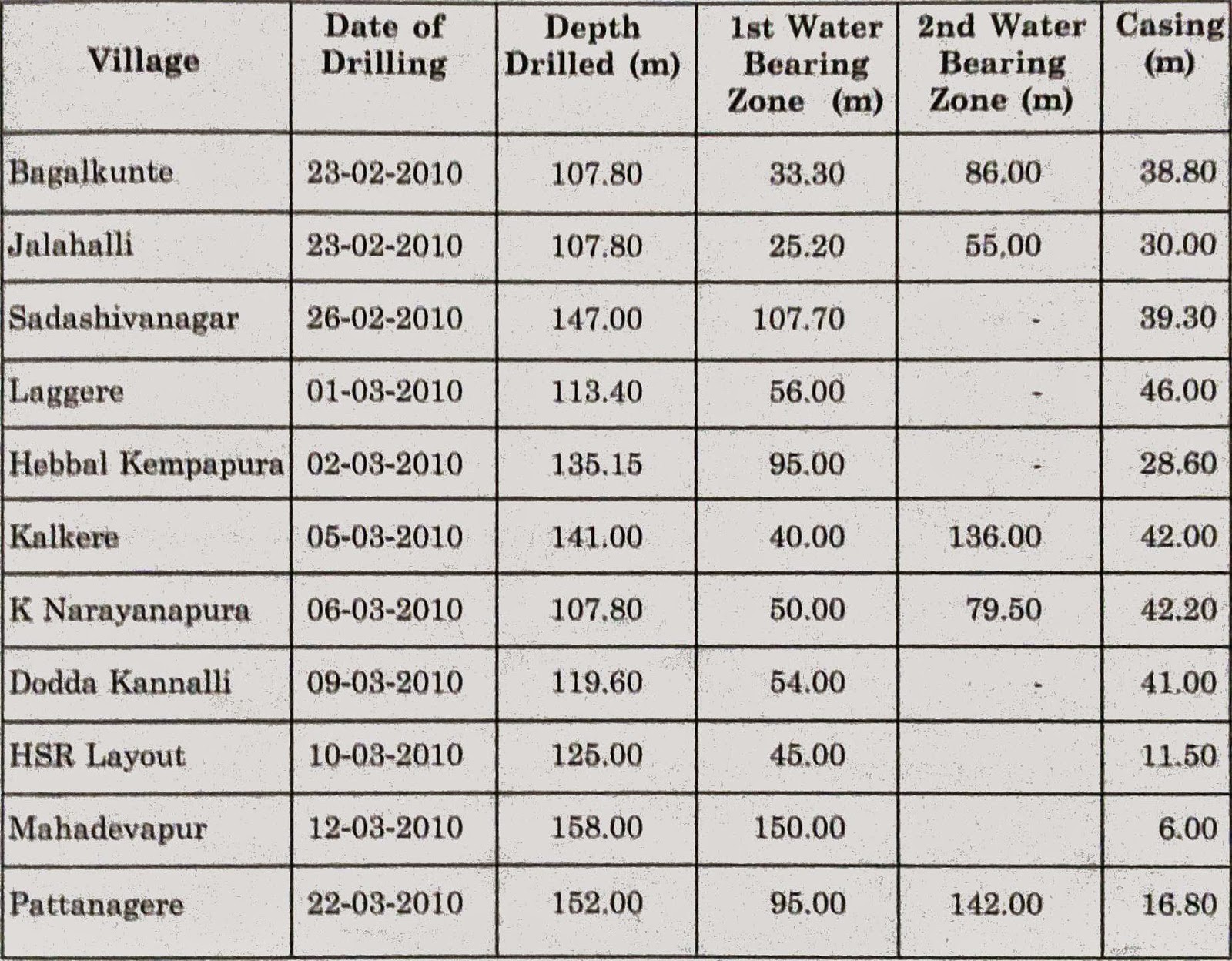 In addition to the collection of samples from borewells, the study also collected other important details like depth of borewell, casing depth, yield of borewell, etc. It was observed that deeper borewells are more in the South East, South west and Northern parts of BBMP area.

As mentioned above, approximately 3000 samples were collected and analyzed by Chief Chemist in the Directorate of Mines and Geology.
I.              Total Dissolved Solids (TDS):

Research suggests that deeper borewells have comparatively higher levels of TDS because longer the groundwater moves through the rocks or sediments the more mineralized it becomes. Concentration of fluoride in groundwater depends on the geological, chemical and physical characteristics of aquifers. Fluoride concentration of less than 1.0 mg/L in drinking water effectively reduces dental caries without harmful effects on health.  In Bangalore, highest fluoride content of 5.54 mg/L was observed near Bellandur.

Below table details out the fluoride in groundwater (>permissible limit) of 1.5 mg/L

III.           Location of high content (above permissible limit of Fe, No3,  TH) in Groundwater, Bangalore city

The high content of Iron in the groundwater samples is attributable to the corrosion of casing pipes of the borewells. The iron content >1.0 mg/L is undesirable for drinking purposes.

Nitrate content in the groundwater may be due to presence of sewage in the channels. High nitrate content is harmful especially for infants and even can cause carcinogenesis. The undesirable drinking water range is >45 mg/L.

Hardness of water is mainly due to dissolved calcium and magnesium salts. The undesirable drinking water limit is > 600 mg/L. Out of the total 2210 samples tested for hardness, 45% were within desirable limit and only 9% were beyond permissible limit.

Of the total 275 samples collected and were tested for heavy metals like Zinc, Lead, Copper, Manganese, Aluminium, Chromium, Chloride,

The study also concentrated on lakes in Bangalore. Totally 161 samples from 96 lakes of BBMP area were collected. Below is the snapshot of couple of lakes in the sarjapur watershed: