A group of volunteers from Canada came down and helped build a rainwater harvesting system in a government school at Dandiganihalli village, rural Karnataka. Representing "Operation Groundswell" (www.operationgroundswell.com) they approached us through Asha and Tim of Animus Consultancy and Services, Bangalore. 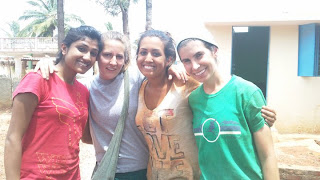 Sanjana, Tammy, Adrianna and Rachael: Some of the volunteers 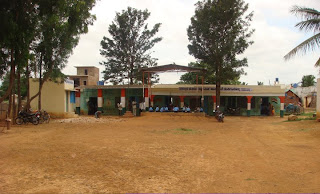 The school itself has a very poor supply of water in terms of quantity and quality. Supplied only every 3-4 days teachers say that the water is too "salty" to be used for drinking and cooking, in other words it has a high content of minerals.

To cook the mid-day meals, school staff actually source water from surrounding neighbours who in turn get their water from outside borewells which are not so "salty" - there is no sustainable drinking/cooking water supply to this school. The volunteers from Canada chose to build a rooftop rainwater collection system since this would go a long way in alleviating the plight of the school children and staff. Kids currently bring their drinking water from home while instead they could easily drink rainwater. More over a study has shown that the groundwater is afflicted with fluoride, so even the "sweet" tasting water is in effect contaminated.

In such a scenario substituting the regular water supply with rainwater will yield great benefits. For one, the school staff and cooks do not need to go outside the school to get water for cooking, since they will have stored rainwater right in the school itself.
Secondly, even the students can drink rainwater and be saved from the ill effects of consuming fluoride contaminated water. 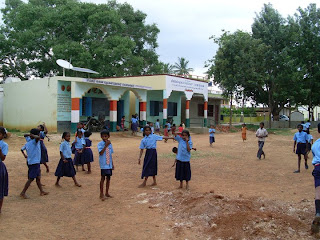 Our main work was building the rainwater tank and it took us 8 days to do this, along with all the other work.
The first 3 days were spent just digging a hole in the ground.. a large one! This was about 11 feet long by 9 feet wide and 6 feet deep and would prove to be the resting place for our final sump tank. 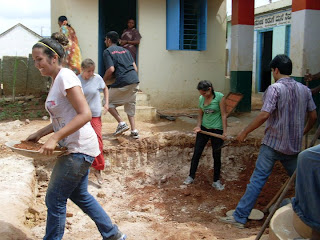 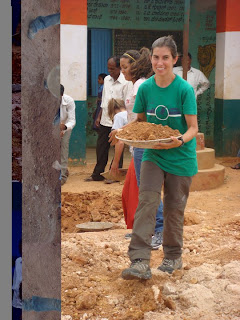 Rachael..happy to be carrying mud :)


Once the digging finished, the team began work on the filter and also started building the actual storage (sump) tank for which there was a lot of brick laying involved. 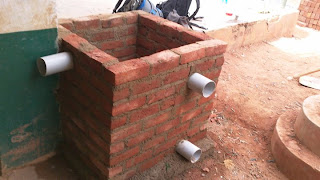 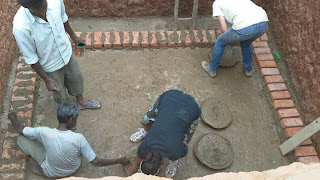 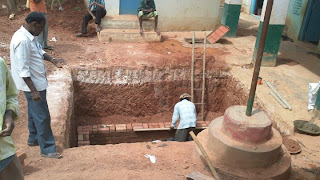 Mr Ramakrishnappa - the key point person for this project 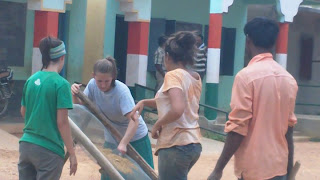 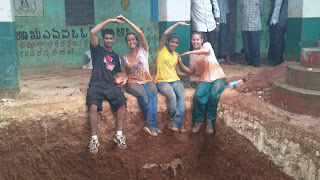 After a hard days work


Alongside laying the bricks, we began work on the piping ie connecting all the roofwater pipes in a way that they finally lead to the sump tank. For the given roof area of 200 sq mts, the appropriate sump tank size that we built was 10,000 litres.

Once the bricks were done, the sump tank was plastered from the inside with a coat of water proof plaster and finally we cast the cover. To make a cover, the workers prepared a temporary support called as "centering" and covered this with layers of paper, cement and wet cow dung. On top of this was poured wet concrete. The cow dung played an important role in ensuring that the concrete we poured did not "bind" with the supporting structure below. 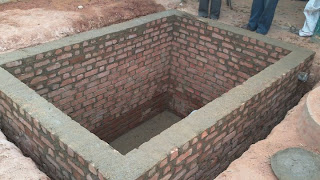 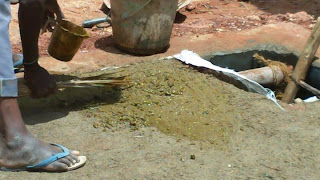 By the eighth day we had finished pretty much all the work including painting the filter. On 24th June, the school arranged for a small farewell function where various locals expressed their thoughts and gratitude for the project. Mr Vishwanath of the Biome Trust spoke about the project and demystified rainwater harvesting for the kids. The students on their part put up a small dance program and gave gifts to the volunteers.. all in all a fun evening! 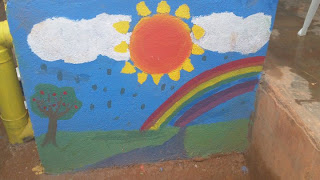 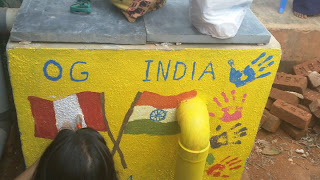 Operation Groundswell India
Posted by Biome Trust at 3:20 AM

Read our article also, as we are one of the Leading Play Equipment Manufacturers in Bangalore