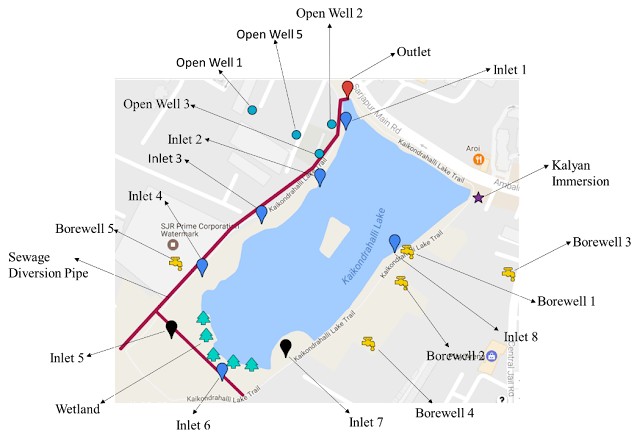 All raw data that has been collated in a raw format can be found in the following link:-

While summarizing some of the data and the pertinent parameters, the following conclusions have been made:

TDS values have been within the range of 410-1140 mg/L. The drinking water standards that are given to be an acceptable limit of 500 mg/L and a permissible limit of 2000 mg/L. While the water is showing high TDS, it can still be considered within the threshold limit.

Conductivity rarely seems to be fluctuating and has been seen to be withing the range of 910-950 us/cm.

Dissolved Oxygen (DO) has shown to be above 5 mg/L up to 12 mg/L. This gives an idea that the DO levels is in fact healthy as compared to the general belief of 5 mg/L being the minimum levels needed for healthy aquatic life. However, it must be noted that the DO levels were only taken during the day, typical during afternoon. Evening levels were not taken and hence the levels could vary and paint a different picture. For this reason, a permanent automatic DO level logger is in the process of being installed.

E. Coli/ Coliforms appears to be present in almost all samples that were taken. A complete strict absent of e. Coli is the standard and norm to be followed. This signifies that there is in fact sewage entry into the lake.

Biological Oxygen Demand (BOD) values have been in the range of of 28-84 mg/L. These are extremely high BOD levels, where 10 mg/L is the maximum standard.

Chemically Oxygen Demand (COD) has largely been under 100 mg/L which can be considered acceptable while compared to the standard of 250 mg/L maximum. However, in the case of Inlet 7 where raw sewage is known to flow into the lake premises, a COD level of 320 mg/L was observed.

It must be noted that the given data is the beginning to a more comprehensive long term water quality data collection. The above mentioned parameters and various more shall be monitored regularly in order to increase understanding and analysis to come to adequate conclusions. Seasonal variations shall be analyzed. The various pertinent inlets are monitored in order to understand the quality of water that is potentially entering the lake. This would give a good indicator in concluding if any sewage is entering the lake as well. With regards to the outlet, the quality of the water that finally exits the lake is understood thereby understanding how the water is changed as it travels through the lake system. Given below is definitions and understanding of certain parameters and how their levels wold provide insight to the fate of the lake water.

pH to put it simply, indicates how acidic of basic the water is. A pH below 7 equates to the water being acidic and above 7 being basic. Typically for surface water, a pH between 6.5 to 8.5 is considered acceptable. The importance of understanding how acidic or basic the water is in its corrosive nature to our infrastructure.
Water that is acidic in nature tends to corrode piping systems as the water can be considered more reactive in nature and have a higher affinity in leaching metal ions such as copper, lead, zinc and iron. Therefore, it can also be understood that acidic water might tend to have a larger amounts of toxic metals present and the Ph value can therefore be a rudimentary indicator to such existence.
Basic water that has a Ph above 7 would indicate that the water is hard. While hard water does not pose a direct health risk, but it can lead to aesthetic problems which could result in precipitation or as it is called ‘scaling’ on piping infrastructures. Hard water can also create difficulty in getting soaps and detergents out.

Total Dissolved Solids (TDS)
Water by nature is a great solvent and can dissolve a majority of substances. This also allows water to pick up impurities very easily. A dissolved solid is a term that comprises of salts, minerals, metals, cations or anions that would be dissolved in water. Total Dissolved Solids (TDS) would be the indicator for us to understand the total amount of such dissolved solids that would exist. TDS primarily comprises of inorganic salts such as potassium sodium, magnesium, chlorides etc., as well as small amounts of inorganic matter.

TDS essentially is the primary and broader indicator that would tell us that there is in fact impurities in water. With the value being above the standard amount can essentially imply that perhaps a more detailed amount of investigation is required to know specifically what impurities are present and what treatment might be required. As finding out the TDS is a more inexpensive process and can be done in real time through hand held meters, it can be considered as one of the first steps to conduct to understand your water.

Turbidity
Turbidity is the measure of the particles that are suspended or dissolved in water that scatter light, resulting in a cloudy or murky appearance. These particles can include silt, clay, inorganic and fine organic matter, soluble colored organic compound, microscopic organisms and algae. With a higher turbidity, there is a significant reduction in the aesthetic quality of lakes in this case, which would result in a negative impact on recreational activities. It can also lead to the increase in cost of water treatment if the water is used for drinking and food processing.
As mentioned, the fine particles in the water suspended is what results in an increase in turbidity which do have a direct degrading influence on aquatic life. The fine particles can kill or reduce the growth rate of fish and reduce the amount of food available for aquatic life. Turbidity increment could be due to natural and man-made pollution. With regards to man- made related interferences, with an increase in nutrients such as phosphorous, algae growth is promoted. An increase in algae population also results in the increase in turbidity.

Total Hardness
Total hardness or water being ‘hard’ is a directly due to the high amounts of dissolved minerals, particularly calcium and magnesium. While hard water is not a health risk, it could create inconveniences due to the mineral buildup on piping layouts and fixtures. Hard water can also be cumbersome in removal of soaps and detergents.

E.Coli/ Fecal Coliforms
Fecal Coliforms are a collection of microorganisms that live in great numbers in the intestines of humans and animals and aid in digestion. They are by nature very harmless and do not produce any adverse effect to humans. However, the presence of fecal coliforms play the role of indicators for it informs us that there has been sewage contamination with the water. This leads to the risk of other harmful pathogens or disease producing bacteria and viruses being present that can induce dangerous illnesses. As these pathogens are usually present in small amounts, it may not be practical to monitor them directly.