The Story of Crooked limbs in Bagepalli

Working as Fluoride fellows for Karnataka under the Fluoride Knowledge and Action Network, I and my colleague Kiran Kumar Sen undertook the journey to Chikaballapur district, one of severely affected fluoride regions in the State. Chikaballapur being one of the fasting growing regions around Bangalore faces severe water shortage and where bore wells are dug more than 1000 feet deep. This contributes to the presence of Fluoride in drinking water from these sources. Interestingly, our cab driver was curious about the visit and had no clue that drinking water sources contains ions such as Fluoride and has such effects on the body before this visit.

Our first point of contact in Chikaballapur was Mr. Nagesh who was associated with Karuna Trust for water testing project undertaken in the entire district supported from Arghyam financially. The project mainly involved water testing of all drinking water sources in the district for six parameters as prescribed by NRDWP (National Rural Drinking Water Programme) in the respective district labs and the trust mainly supplied the man power for implementation of the testing.

The tests are conducted every six months i.e. post and pre monsoon and all the data is uploaded on the NRDWP site regularly. Not all water samples are tested in the district labs and only samples which are detected for any contamination from field testing kits provided with panchayat are bought to district labs for further determination of contaminants through spectrophotometer analysis.

Below are pictures of District lab and field testing kit used. 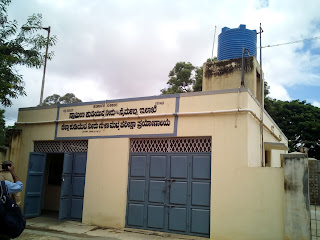 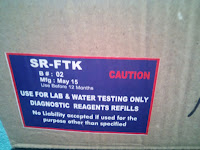 Our next meeting was with District Fluoride Officer Mr.Vinod. He is appointed from NPPCF (National Programme for Prevention and Control of Fluorosis) working towards Fluorosis mitigation in the State from past one year. The NPCCF also conducts water testing of drinking water sources and urine analysis of patients who appear to be affected from fluorosis.

They strictly adhere to guidelines mentioned in NPPCF for fluorosis mitigation and thus act only as advisory body for the State departments who are responsible for implementing their solutions. The officer was of the view that the sustainability of existing 400 plants plus another 386 to be installed under various schemes are highly questionable in water deficient areas such as Chikaballapur. Thus, he was interested in knowing alternative methods and different interventions that could be introduced to tackle fluorosis problems in the district.

After the meeting, on his suggestion we headed towards Bagepalli Taluk which is known for high fluoride content and visited Gulur Town, Bommagarapalli and Gundlapalli which have been severely affected with fluorosis (both dental and Skeletal). We visited a private school in Gulur along with field officers Ramesh and Somashekar working for water and sanitation in the region. There we could identify the presence of dental fluorosis in many children of the school as shown below.

Currently, Gulur Town is equipped with RO plant from government and most people consume this water for drinking and cooking purposes. But the consumption of fluoride contaminated water continues in the villages (more than 2 ppm. Over all these years it has affected the people with dental and non-skeletal fluorosis. 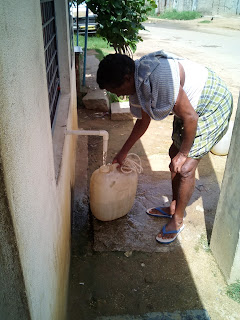 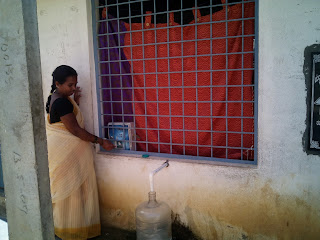 Surprisingly, there is presence of shallow water sources (seen below) nearby which is used for the past 25-30 years.by many villagers for drinking purposes. It was found to have acceptable fluoride concentration upon our testing. This presents an excellent opportunity to identify and preserve these kind of sources in these regions. This could a potential source of drinking water with minimal treatment. 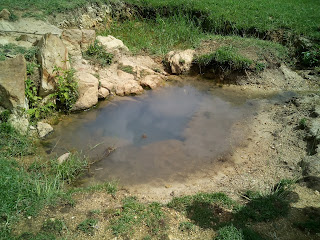 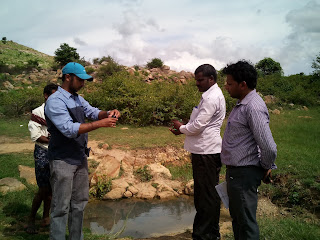 We visited Bommagarapalli and Gundlapalli later. These villages presented cases of severely affected people with both non-skeletal and skeletal fluorosis as shown below. Both the village have Fluoride concentration between 2-2.5 ppm. The main source of drinking water and all other use was groundwater from borewells. Though a RO plant has been commissioned for Bommagarapalli by the government it is yet to be installed and tanker water is supplied from local NGO Swasti which is not affordable to majority of the villagers. The stand-posts seen below supply water for different uses. 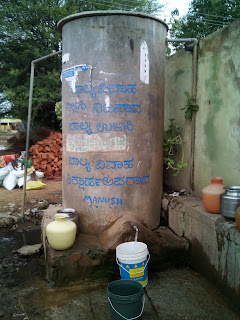 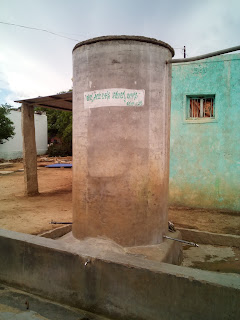 Even water supply to the schools is groundwater. As a result, dental fluorosis could also be seen in children along with Adults. We can came across lot of complaints about muscular and joint pains. Most people aged above 35 years had initial stages of skeletal fluorosis. The pictures below narrate a story in themselves about Fluorosis affecting population in Bommagarapalli. 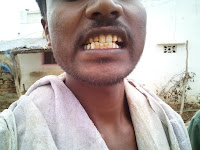 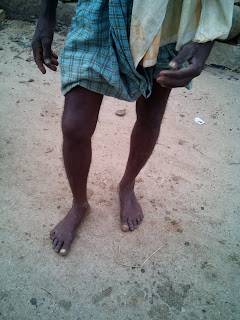 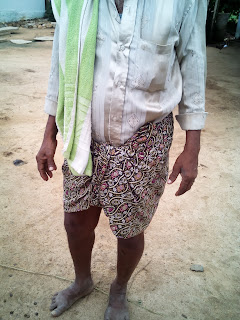 We found the case of severe skeletal fluorosis in Gundlapalli, seen below 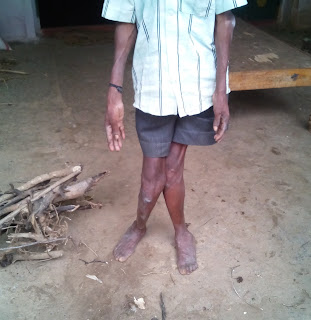 The diet pattern of the people consists of ragi, rice and sambar with tomatoes. The lack the essential nutrients like calcium, Magnesium, Vitamin-C in enough concentration in the food is aggravating the condition in the affected regions. This is one of the major areas where significant improvement is required.

The people here have gone through various phases of identification of fluorosis and its manifestations by various groups. But, these villagers desperately require the most practical solution to this issue. They are open to solutions which can mitigate the effects of Fluorosis. The positive side to this story is that there are people on the ground eager to learn from Fluorosis Knowledge and Action Network and work towards Fluorosis Mitigation.