David, Nitin and Lam: recipients of the "Davis Projects for Peace"

Three students from the USA have gotten together to help implement rainwater harvesting in 5 schools of rural Karnataka, India. David Pierce, Lam Hoang and Nitin Sajankila from Trinity College (Hartford, Connecticut, USA) are recepients of the "Davis Projects for Peace" (www.davisprojectsforpeace.org) and decided to use the grant money to help construct rainwater harvesting systems in Pavagada, Karnataka. 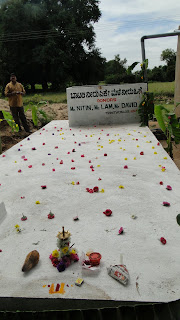 The Davis Projects for Peace was started by Kathryn W. Davis who sponsors 100 projects for peace every year to various groups of students at over 90 colleges/universities throughout the U.S. The overall goal of these projects is to promote peace. The village in question - Pavgada, is part of a belt where extensive deposits of fluoride are found in the groundwater. People drink this water and over time develop Fluorosis, a debilitating disease which affects the teeth and skeletal system. David, Nitin and Lam argued that capturing and drinking rainwater would reduce the terrible effects of this disease.
Davis Projects awarded the students US $10,000 for the project. They also managed to raise another US$ 4,850 from their college deans and president. 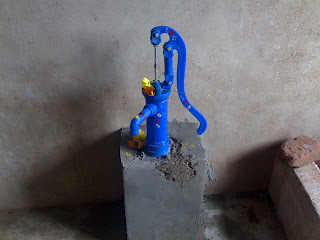 Hanpump provided for using the rainwater. In this school it will be used in the kitchen 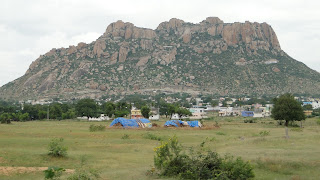 
The students had first contacted Biome Trust in early 2010. Nathan Stell who was then working with the trust helped them extensively during the application process and to firm up the grant proposal. Nathan was also the one who encouraged them to raise more funds to maximise the impact of their work.


The Biome Trust then contacted a Karnataka based NGO called BIRD K (www.birdk.org.in) to help out with the project. BIRD K has done extensive work in the fluoride affected areas and accepted our suggestion of utilising this money effectively. They identified 5 schools located in villages around Pavagada where they could build rainwater collection systems. Main part of the work was building large tanks where the rooftop rainwater could be stored. We decided to build these tanks underground and the materials used were essentially bricks and cement. 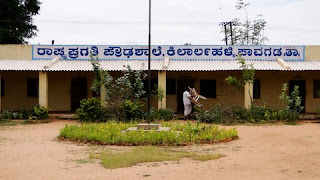 One of the chosen schools in Kilarahalli village, Pavagada Taluk 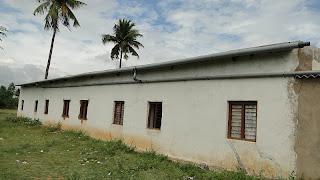 Nitin, David and Lam stayed in Pavagada for a month to learn more and make sure that the project was moving in a satisfactory manner. Living out of a single room, they braved the odds to last out the entire month and even made friends while they were there :)

The students also worked with school children and educated them about the work that was happening. Any rainwater harvesting system needs to be constantly maintained in terms of keeping it clean and dust free. Towards this end, the Trinity kids helped form student committees who would take care of the system once it was implemented.

The students can be contacted at the following e mail id's
Nitin.Sajankila@trincoll.edu
david.w.pierce@gmail.com
Lam.Hoang@trincoll.edu
Posted by Biome Trust at 12:51 AM